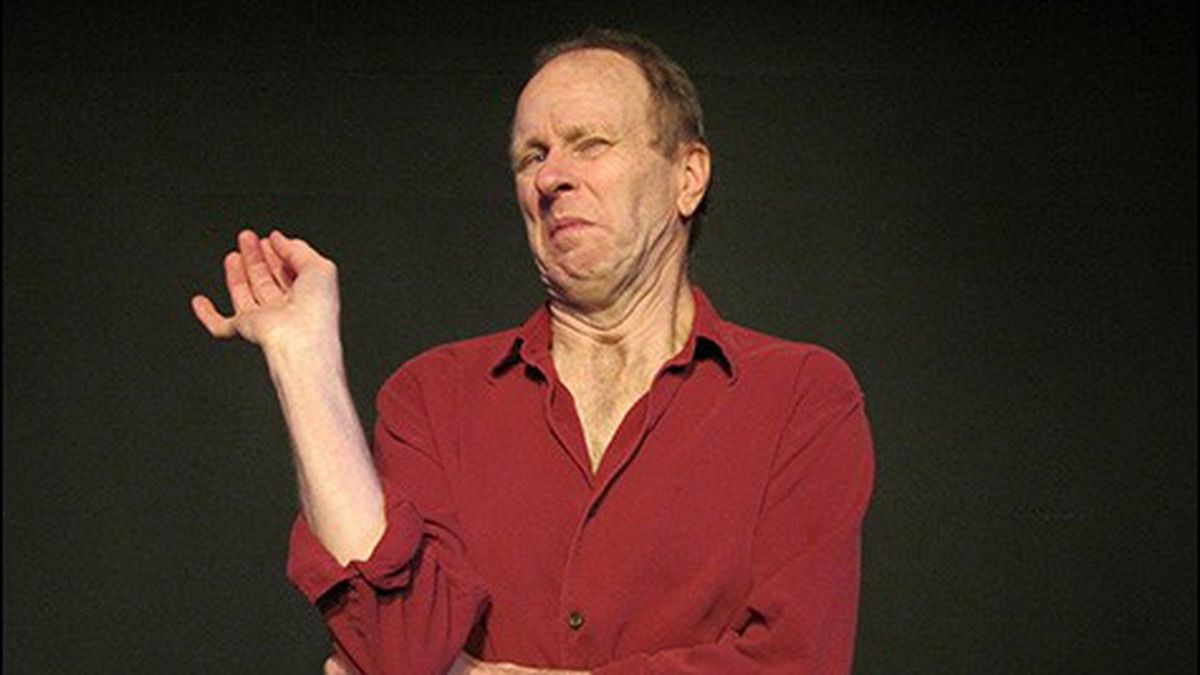 It is perhaps unsurprising that a show called Geezer would attract a — how to put it delicately? — more mature audience. Indeed, after the show my companion for the evening and I were affectionately referred to by another audience member as “the two non-geezers in attendance.” But younger theater aficionados shouldn’t let the Werthers-tinged title stop them from coming to the engrossing, funny, and deeply touching solo show by seasoned (both in years and professionally) performer Geoff Hoyle.

Hoyle, who you may remember as The Lion King‘s original Zazu on Broadway, as Pickle Family Circus clown Mr. Sniff, or from the last time he performed Geezer in Berkeley in 2011, is a well-known physical-comedy genius, and his miming is visceral and off the hook (or the wall, if you want to stick with the mime analogy). Composed of two acts and embarking on a series of autobiographical and intertwining snapshots, Geezer is a rumination on life, though death certainly steals the show from time to time. From nursing home sketches to stories about his father’s passing at the relatively early age of sixty to an account of learning to be a “mobile statue” with Etienne Decroux during the revolutionary late ’60s in Paris, Hoyle hops, skips, and mock-puppets his way through the darker dips of mortality, only to emerge with quips, big laughs, and poignant explorations of enlarged prostates and varicose veins.

Developed with and directed by David Ford (All the Rage, Reading My Dad’s Porn and French Kissing the Dog), Geezer retains its remarkably high energy throughout its ninety-minute run. Hoyle starts the show by launching the finely tuned instrument of his body — pantomiming comically long nose, ear, and chest hairs, for instance — then diving into a video game enactment of his inevitable decline, with pit stops along the way for dementia, disability, and periodontal decay, all with much physicality, beatboxing, and comedic bravura. (He gets by with a little help from Depends.) After that, he delves more or less in a linear fashion into his boyhood crush on his Latin teacher, early acting experiences (he played a squirrel in his first school play), and absurdist theater education, with occasional segues to somber hospital visits when his father laid dying. The plot and pacing evoke the style and terrain of memory, specifically the memory of an older person — disparate, wistful, elliptical — and works well to chop up the expansive narration and also to help Hoyle not keel too far over into the realm of the morose.

In the second half of the show Hoyle goes all heart surgeon on us, setting aside some of his more overt grandpa humor in favor of reflective and heartbreaking vignettes. This isn’t to say the second act is any less hilarious — if anything, it’s more so, just with fewer Woody Woodpecker sound effects (a good move, in my opinion). His scene involving a nursing home of his own design (Elder-ado) contains both the sweetest sentiments and raunchiest jokes (“My doctor asked me for a blood, stool, and urine sample, so I said, ‘Here, take my underwear'”) and Hoyle’s impersonation of his mother is, to channel my own grandmother, just the cutest goshdarn thing.

Though Hoyle may be 67, he certainly didn’t appear to be fazed by all the jumping around, character and accent shifts (from Yorkshire to French to geriatric), facial gymnastics, and haunting-funny dances with his own coat. Indeed, Hoyle is probably in better shape than I am and his playful energy and gregarious grandstanding suggest that, though he talks much about the inevitable failings and ailings of the body, he’s sure as hell not going gentle into that good night. He’s tap dancing there, probably.

Hoyle’s intelligent and earnestly humorous interactions with his adult children and their friends are also highly entertaining, as we watch him try not to embarrass himself with too much talk of socialism and the days when “text” and “friend” were nouns only. Though the set design is nearly barren and the lighting minimal, Hoyle is such a dynamic storyteller that he doesn’t need much more than a stage to succeed — just his agile limbs and impressive mimetic faculties.

It’s difficult to broach the subject of death (even in a theatrical way), since our culture encourages much denial and polite subject changes, and that’s also why shows like Geezer are so necessary. They force us to confront our mortality at the same time as we are laughing at it. We hope that both young and old theatergoers get to experience Hoyle’s moving and laudable performance. Besides, you know what they say: A mime is a terrible thing to waste.

Now get off my lawn.

Facebook
Twitter
Previous articleUnder-the-Radar Soup in Oakland Chinatown
Next articleMid-Week Menu: A Provencal-Style French Bistro on Lakeshore, the New Phat Beets Market Location, and a Brick-and-Mortar for No No Burger
18,639FansLike
0FollowersFollow
67,429FollowersFollow