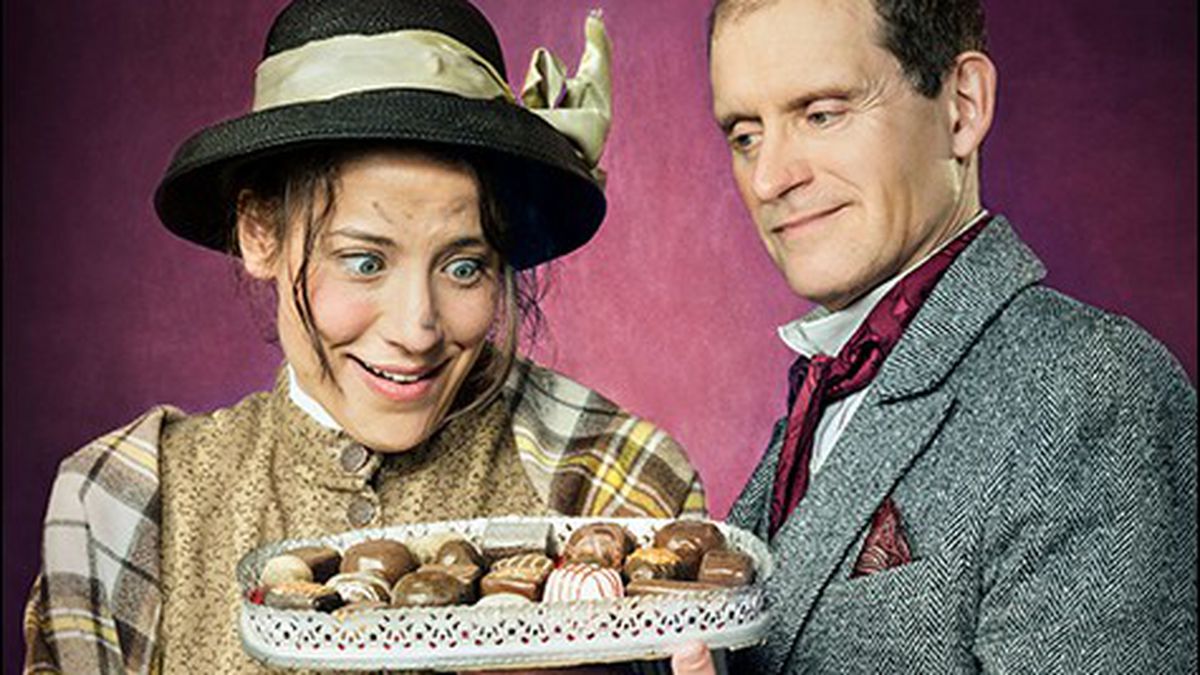 Irene Lucio is a knockout as Eliza Doolittle.

Pygmalion, the classic, century-old George Bernard Shaw play about middle-class morality and gender returns to the spotlight again this summer in California Shakespeare Theater’s frank and funny production. The play gets its name from Ovid’s Greek myth about a sculptor who falls in love with the statue he has carved. Those who’ve seen the musical My Fair Lady will also be familiar with the plot of Shaw’s witty tale of class, language, ambition, and the whims of rich men.

But if you aren’t familiar, the story goes like this: Professor Henry Higgins (a priggish Anthony Fusco, last seen in The Intelligent Homosexual’s Guide to Capitalism and Socialism with a Key to the Scriptures) is in the phonetics business, and prides himself on being able to identify people based on their speech. One rainy night in Covent Garden he meets a poor flower seller, Eliza Doolittle (the radiant Irene Lucio, who makes her Cal Shakes debut in this production), and makes a bet with his friend Colonel Pickering (L. Peter Callender, A Winter’s Tale) that he can turn the rough-and-tumble street gal into a lady.

In Higgins’ words: “I shall make a duchess of this draggletailed guttersnipe. … Yes, in six months — in three if she has a good ear and a quick tongue — I’ll take her anywhere and pass her off as anything.” Higgins’ housekeeper, Mrs. Pearce (the terrific Catherine Castellanos, Twelfth Night) is understandably opposed to Higgins’ and Pickering’s plan to play God with Eliza’s life, since she is working-class herself and accustomed to the consequences of rich men’s short attention spans. But she is, of course, ignored, and Higgins sets about transforming Eliza’s speech and manners. He succeeds a little too well, however, and Eliza eventually rebels against him and his childish, irascible demands.

Directed by Jonathan Moscone, who has worked with Shaw’s material twice before (in Candida and Man and Superman), Pygmalion is full of comedy, pathos, and subtle class warfare. The show’s tagline, “A decidedly unromantic comedy” is fitting, since there is barely a whiff of attraction between the determined Doolittle and the prissy Higgins. If anything, the relationship comes off as more of a father/daughter pairing, especially since Eliza’s own father (the charming James Carpenter, American Buffalo) wants little to do with her, except to use her for financial gain. So while Shaw’s ambiguous ending is supposed to leave audiences wondering “Will they or won’t they?” my thoughts were more akin to something Eliza might have said: Like bloody hell they will!

The stilted Eliza/Higgins romance is also very Shaw, who was largely celibate (and didn’t lose his virginity until he was 29). As it was, the real romance appeared to be between Higgins and Pickering, whose circle jerky slaps on the back and linguistic parleys might as well have come with a “Do not disturb” sign.

Lucky for us, however, Pygmalion has so much going for it as a production that the unbelievable pairing hardly matters. The cast is stellar, the set by Annie Smart is both opulent and like something out of an issue of the New Yorker (the life-sized, black and white illustrations of background people added to the charm), and the comedic stylings of Carpenter’s Alfred Doolittle, Castellanos’ Mrs. Pearce, and Fusco’s Higgins are infinitely watchable. The audience rarely went more than a few minutes without lapsing into chortles and full-on LOLs. Lucio was a knockout as Eliza. Her prima physicality was just as luminous as her brash, Cockney determination of wanting to “toke lak a laydee.” The cast’s astounding accents were aided by dialect coach Lynne Soffer, the Bay Area’s “Meryl Streep of dialects.”

The best scene involved Eliza’s first test as a prah-puh laydee  — a lunch with Higgins’ mother (the effervescent Sharon Lockwood) and three society people. Eliza, dressed in Royal Wedding-esque attire and an enormous hat shaped like a taco (costumes by Anna Oliver), is hilarious in her stilted and robotic attempts to impress her newfound peers with small talk on gin and influenza. Eliza and her father are full of self-conscious theatricality and humanness, which makes Shaw’s tendency toward heady speechifying infinitely easier to stomach.

Indeed, I found the social commentary to be highly engaging, thanks in part to the play’s swift pacing and keen performances. Get your dose of turn-of-the-century class and gender angst (which are sadly still very applicable today) in Cal Shakes’ beautiful outdoor proscenium before it’s doolittle, doolate.&#8;

Exclusive: Peralta Trustees May Be Targets of FBI Probe