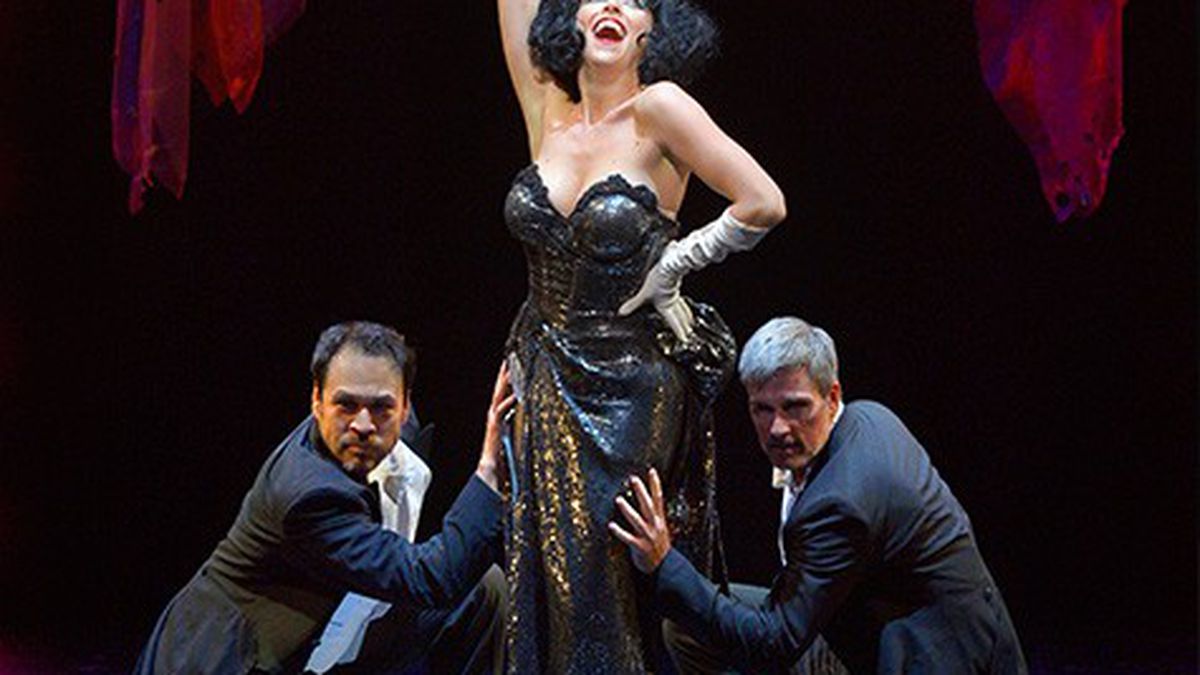 Review: An Audience with Meow Meow at Berkeley Rep Is Not Quite Purrfect

The funny and frank diva performs in her first musical play.

When it comes to cabaret-style performances, you can’t get more original than Meow Meow, the international singer-slash-comedian-slash-crowd-surfer who has worked with the likes of David Bowie, Pina Bausch, and Mikhail Baryshnikov. The Australian-born firebrand’s latest, An Audience with Meow Meow at Berkeley Rep, is her first foray into an extended-run musical play (capping at about ninety minutes). Part slapstick, part burlesque, part torch-y song numbers, and a decent amount of audience groping (we’ll come back to that), Audience stars, naturally, Meow Meow, aka Melissa Madden Gray, who brings a signature blend of loopy and bawdy antics to the threadbare plot. Meow Meow is a diva who sings, dances, changes costumes onstage, pulls Exit signs off the wall, and naps on pianos — all while smoking a cigarette. Audience is nothing if not a transgressive performance, one in which the fourth wall is obliterated as if by glitter bomb and the entire audience is expected to sympathize with Ms. Meow’s plights, of which there are many.

The premise of Audience is fairly simple. Meow Meow’s show is falling apart before our eyes. Her dancers (the fantastic Michael Balderrama and Bob Gaynor) quit after the first number, her producers and stage crew threaten to cancel the show (spoiler: They eventually do) if she doesn’t get “back on script,” her live band packs up and leaves, and eventually Meow Meow is stripped of even her costume — left shoeless in a plain slip, without even the boost from her silicone breast falsies, which the management also takes from her after shutting her down.

Despite these pressing obstacles, the show must go on, as they say. To do so, Meow Meow elicits the help of the audience to turn the show around, making the play’s title especially apt. As a warning, if you sit in the first few rows, you very well might be called on to participate in one of Meow Meow’s numbers, to serve in roles as eclectic as backup dancer, human arm chair, and once, stroker of Meow Meow’s leg below the knee. These audience interactions are some of the funniest moments in the show, always starting with Meow Meow’s gangly crawl off stage and asking in a little girl’s voice, “Are you busy?”

The audience is very much involved throughout the show, both in terms of propping up Meow Meow’s oversized ego, and serving as literal props for her freewheeling grandeur and dithery comedic stylings. In between the musical numbers — which range from Radiohead’s “Fake Plastic Trees” to “Itsy Bitsy Teeny Weeny Yellow Polka Dot Bikini” to Bertolt Brecht’s “The German Miserere” — Meow Meow waxes philosophical (“Is there a God? Are children an institutionalized form of narcissism?”) while drinking Beaujolais from the bottle and occasionally lying down for a quick nap on stage. With all the tangents, the props, and her mastery of surprise, it’s not too shocking that she dubs herself the “Mother Courage of performance art” in the show. But while Meow Meow may have elevated cabaret to a kind of performance art, Audience is a little too disjointed and gimmicky to function as a fully formed musical play.

While the first half is a panoply of LOLs, Meow Meow’s underlying shtick of “Oh no, my show is getting canceled!” gets a tad old after about an hour. Once the show did finally get “canceled,” the pace slowed way down, and it became a struggle to keep caring about Meow Meow’s antics — we spent five minutes watching her remove a near-infinite amount of pantyhose (I lost track of how many pairs she actually removed). After the performer and stage are stripped of their accoutrements, it’s hard to sustain much sympathy for the diva’s self-imposed disasters, despite the best efforts of director Emma Rice (Tristan & Yseult, The Wild Bride) who also adapted the production. The “cancellation” also timed with a severe mood shift, which took a turn for the somber, and involved stories alluding to wartime rape, and, at one point, a radio broadcast about the abuses of girls in Nigeria, which didn’t gel with the light-hearted hokeyness from moments earlier.

Aside from the audience participation, the musical numbers helped ground the show’s skimpy plot. And though most the songs were sharp and deeply felt (musical supervision came from Lance Horne, who also played live piano in the show), they weren’t enough to carry the show to any kind of satisfying conclusion. However, the “Itsy Bitsy” song, performed in multiple languages and involving a giant balloon, was perhaps the greatest and weirdest number we’ve seen in ages.

So while Audience might not exactly be the cat’s pajamas, Meow Meow is a delightful and strange beast, and one of the most innovative chanteuses performing today. Watching her crowd-surf almost up to the back rows of the orchestra section was pretty close to purrfect, as far as entertaining theater goes.