Come for the fried chicken, stay for the side dishes, including the best avocado salad in town. 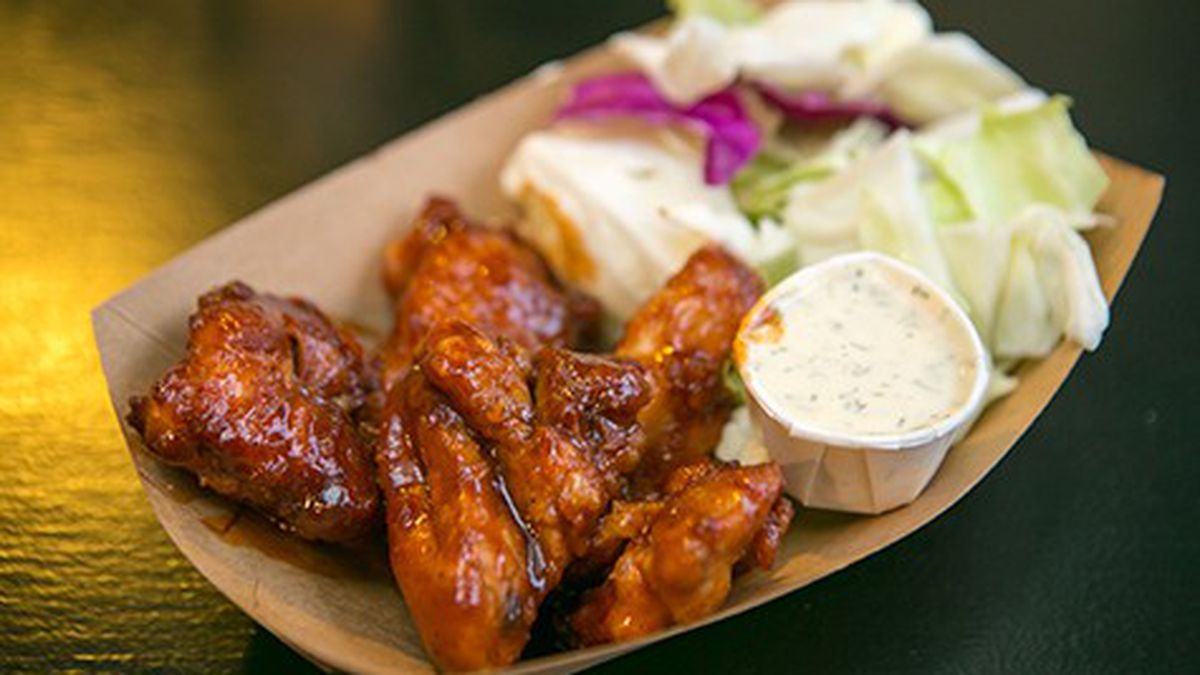 The logo for Abura-ya, a new pop-up restaurant in downtown Oakland, riffs on the Ramones’ iconic band logo, replacing the bald eagle in the punk quartet’s reimagined Presidential Seal with a fierce-looking rooster — a skull-and-crossbones bottle (of poison? hot sauce?) in one talon and a chef’s knife in the other. “Domo Arigato,” a scroll in the bird’s mouth reads. “This place is bad-ass” is the obvious subtext.

For the past three months, Abura-ya has taken over Garden House, a casual lunchtime salad spot, four nights a week. The pop-up, whose name means “oil shop” in Japanese, specializes in the Japanese-style fried chicken known as karaage. The restaurant is a collaboration between chef Adachi Hiroyuki, Angelo Hernandez (Hiroyuki’s right-hand man in the kitchen), and Rodrigo de la Raza.

On nights when Abura-ya is in the house, the place has something of a punk-rock vibe — boisterous, free-form, vaguely anti-establishment. (Hiroyuki, in fact, plays bass for a couple of punk bands.) Like any proper pop-up, the restaurant makes the most of a jury-rigged kitchen setup — two small table-top deep-fryers, a flat-top griddle, and big buckets of sauce lined up on the counter. The menu, by necessity, is limited — karaage, rice balls, and maybe a dozen izakaya-style side dishes that vary from day to day.

Most likely you’ve come for the karaage. The chicken — boneless, skinless thighs cut into large chunks — is marinated overnight in shio koji (a fermented rice product prized for its tenderizing properties), then dredged in cornstarch. The chicken gets fried twice — first at a lower temperature so that the residual heat slowly cooks the meat after it’s removed from the hot oil, then flash-fried to crisp it up.

Plenty of Japanese restaurants serve karaage, though few versions are this good: moist and flavorful, with a thin exterior crust that maintains its crunch even after being drenched in sauce. But what really distinguishes Abura-ya is the fact that you can order the chicken in a whopping eight different flavors, both wet (i.e., with sauce) and dry. You can get a different flavor for every four pieces of chicken you order.

It’s hard to pick a favorite. Among the “wet” flavors, I loved the sweet-and-spicy kick of the Japanese barbecue sauce — an amped-up, Sriracha-spiked tonkatsu sauce whose pleasures were similar to those of superior Buffalo wings. And even though bad Americanized Japanese restaurants have ruined teriyaki sauce for me, Abura-ya’s agave-ginger teriyaki — made without sugar or corn syrup — proved to be its redemption: balanced, barely sweet, and thoroughly non-goopy.

The “dry” options included a deeply savory garlic miso and a couple of flavors that feature spice blends supplied by Umami Mart, the Japanese bar and kitchen shop. The “umami salt” is a blend of dried shiitakes, Korean black garlic, and sea salt, plus dried kelp that Hiroyuki adds for an even bigger umami jolt. It’s basically all-natural MSG, and chicken seasoned with it is just as addictive as that characterization would suggest.

One more bonus: The fried chicken itself, and almost all of the sauces, are gluten-free. (The beer you’ll naturally want to wash it all down with, however, is not.).

You can request your chicken with a side of rice or, better yet, get one or two yaki onigiri — triangular rice balls that are grilled until they form a toasty outside crust. Cut in half, the grilled onigiri form the buns for one hell of a fried-chicken slider: karaage, Japanese barbecue sauce, wasabi slaw, and sliced tomato and avocado.

Even the complimentary side of fresh-cut vegetables — wedges of impeccably crisp cabbage during each of my visits — isn’t just an afterthought. Hiroyuki serves these with a little tub of potent house-made miso ranch dressing that’s so addictive I want to buy it by the jarful.

Speaking of which, if there is a more vegetarian-friendly fried chicken shop in the Bay Area, I’m not aware of it. Abura-ya offers vegan “drumsticks” (made with soy protein), organic extra-firm tofu, and zucchini — all prepared just like the karaage. Instead of the sad, desiccated little cubes you so often find in fried tofu dishes, these were luxuriously dense and had a cheese-like nuttiness. As far as fried food goes, this tasted very, very healthy.

Indeed, as tasty as the chicken is, what sets Abura-ya apart is the quality of the vegetables. Hiroyuki has a day job hawking produce at San Francisco’s Ferry Building farmers’ market for Capay Organic, so his employer and a few neighboring vendors supply most of his fruits and vegetables: the sliced pluots in a boozy “sake sangria” that’s sold by the glass jar like some kind of purple-pink moonshine; the skinny Japanese cucumbers for a salad that was all suave wasabi ponzu and crunch; and the juicy, peak-season tomatoes (likely available for just a few more weeks) that helped make those aforementioned sliders such a treat.

Even more, I appreciated how Abura-ya doesn’t make a big deal about this. The quality of the food speaks for itself.

Take the salad listed on the menu simply as “Avocado,” which I later learned was a Gwen varietal from Brokaw Nursery — buttery and rich, with an immaculate golden-green flesh. The half-avocado was diced but kept intact, like a little boat, and the pit hole held a bracing wasabi vinaigrette dotted with whole mustard seeds that pooled out as we ate. I can’t recall the last avocado I ate that was as good.

Most of the other side dishes featured similarly simple, but elegant, vegetable preparations. A mass of shishito peppers were roasted with a tamari and ginger marinade until they resembled long-cooked collard greens. A version of okonomiyaki (a Japanese cabbage pancake) was topped with two sauces — a Worcestershire-like barbecue sauce and a citrus aioli — applied in a pretty brown-and-white wave pattern.

And even if you’ve already ordered a ton of karaage, you shouldn’t skip the chicken oysters, those succulent morsels that Hiroyuki cuts from the thighs and saves to sear on the grill. Tossed with shredded lettuce and more of that sublime teriyaki sauce, these come about a dozen to an order and make a great bar snack.

If there’s such a thing as a punk-rock chicken nugget, maybe this is it.