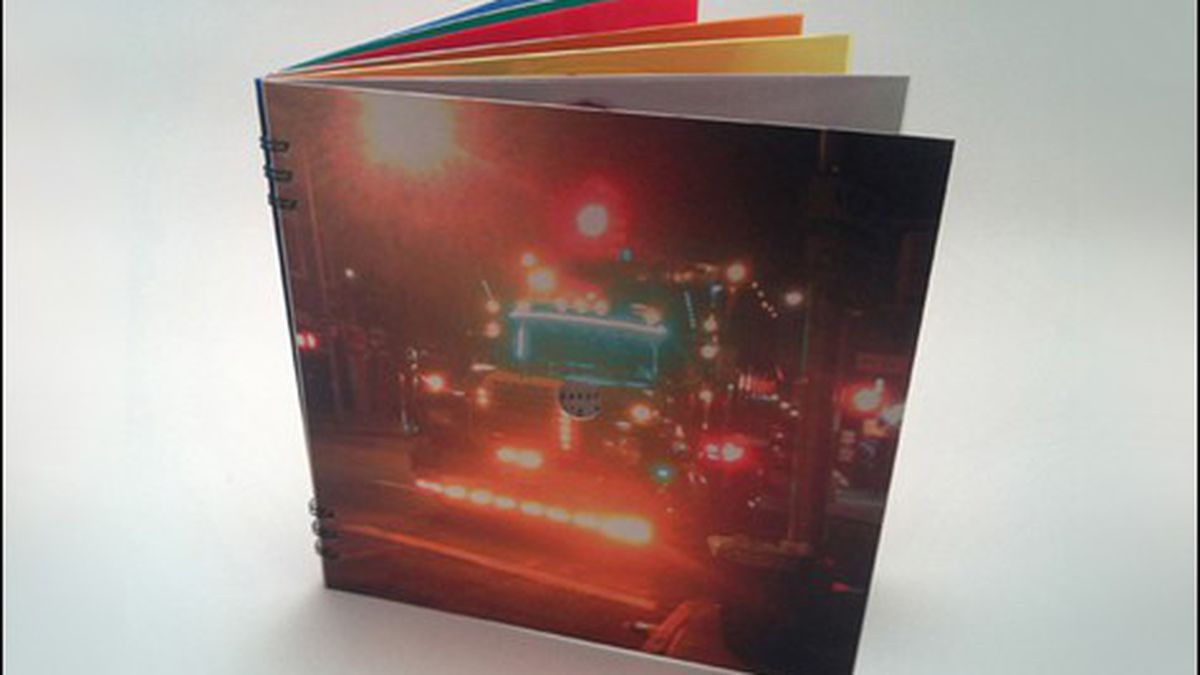 How San Francisco's Pirates Press revived an extinct record format and turned it into an art object for local bands.

Covering the walls of Matt Jones’ office at Pirates Press, a media manufacturer in San Francisco, are hundreds of fragile seven-inch records made of thin PVC plastic called flexi-discs. The records resemble normal seven-inch singles, but are as flimsy as light card stock and come in varying degrees of translucence and a dizzying array of colors. And although his paper-strewn office belies this fact, Jones has had remarkable success as head of Pirates Press’ flexi-disc production.

In a sense, Jones created his position by single-handedly reviving the flexi-disc, a previously obsolete and unavailable format. Commercial manufacturing completely ceased between 2000 and 2010, until Jones began redeveloping the technology of making the inexpensive and malleable records, which were previously used as disposable promotional giveaways. The thin, light flexi-discs are less costly to produce than normal seven-inch singles, and offer the same amount of music for much less money. To transform the perception of flexi-discs from novelty swag to sought-after art objects, Jones worked with local labels and artists to develop creative packaging that made the records more collectible. Today, Pirates Press has seven employees in its flexi-disc department and has manufactured nearly 400,000 flexi-discs since 2010. It claims to be the only company in the world offering the format.

The use of flexi-discs — then called “soundsheets” — started in the Sixties, when they were manufactured by a Florida company called Eva-Tone. Eva-Tone was the largest flexi-disc producer in the world for several decades, with The Library of Congress, The Beatles, and National Geographic among its more high-profile clients. In 1979, for example, Eva-Tone manufactured more than 11 million flexi-discs of whale songs to appear as free inserts in National Geographic. At the format’s peak popularity in the Eighties, music magazines often included flexi-discs in their pages.

As interest in vinyl dropped throughout the Nineties with the popularization of CDs, interest in flexi-discs disappeared. By 2000, Eva-Tone, then the last remaining commercial manufacturer of flexi-discs, halted its production entirely. The far more portable CD was by then ubiquitous. It would be at least another decade until vinyl made a resurgence.

When Jones decided to try and produce flexi-discs ten years after their demise, there were few resources available. “I talked to Eva-Tone to find out what they did with their machines,” Jones said. “They sold them for scrap.”

While trying to figure out how the flexi-disc was made and improve upon the process, Jones was led to many subjects. “I know way more about parallelism and physics than I ever thought I would,” he said. “The whole thing is a many-headed hydra.” Jones is fiercely protective of his product, and would not reveal how he makes them or allow any photography inside Pirates Press’ facility. When pressed, he described the process as “proprietary” and “clandestine.” Pirate Press’ website states the company uses “plates created by way of our state-of-the-art DMM Processing technology in Europe.” Jones would only say that the manufacturing process requires a hands-on step for every flexi-disc produced.

Flexi-discs are more susceptible to scratches than a normal record, and, as a result, the most common complaint about them has been the quick deterioration of sound quality. But Pirates Press’ acute attention to detail in the manufacturing process and the fact that its flexi-discs are twice as thick as pre-millennial ones ultimately eliminated this problem.

Pirates Press’ first flexi-disc product was a 2011 compilation called Group Flex on local imprint Castle Face Records. Jones co-owns Castle Face with Thee Oh Sees’ frontman John Dwyer, but he’s quick to say that Group Flex was Dwyer’s brainchild. Inspiration struck Dwyer when he discovered a 1964 National Geographic flexi-booklet entitled Bird Songs of Garden, Woodland and Meadow, a collection of sounds by different birds. The vintage flexi-booklet contained twelve flexi-discs bound together in a hardcover. “I got it for a quarter at the Laney Flea Market,” Dwyer recalled, adding that he was elated to discover the bizarre relic. The five-by-seven-inch packaging of the flexi-booklet became the model for Group Flex and, ultimately, for the flexi-booklet option offered by Pirates Press. The spiral-bound booklet of playable pages holds ten exclusive tracks by local garage rock bands, including Thee Oh Sees, Ty Segall, The Fresh & Onlys, Bare Wires, and Blasted Canyons. The discs are multicolored and extravagantly adorned with holographic designs by artist William Keihn. Group Flex immediately sold out, and its first pressing (which contained a misspelling of Ty Segall’s name, making it more collectible) has fetched nearly four times its original retail price.

Since the format’s reintroduction, flexi-discs and the creative packaging by Pirates Press have popped back into popular culture. A deluxe reissue of The Velvet Underground & Nico, celebrating the seminal album’s 45th anniversary last year, included a translucent blue flexi-disc with Ty Segall’s cover of “Femme Fatale” on the A-side and the original track on the flip. Pre-orders of now-defunct San Francisco rock outfit Girls’ second full-length Father, Son, Holy Ghost, included a flexi-disc containing an unreleased track. Following the success of Group Flex, Castle Face issued a follow-up flexi-booklet entitled Son of Flex with original artwork by Joe Roberts. Indiana label Joyful Noise licensed Deerhoof’s 2012 album Breakup Song to release a special flexi-booklet edition: It contains twelve pages, six of which are playable, and sold out its limited run of five hundred copies in two days. Shortly after, Joyful Noise announced a new flexi-disc singles club in which members receive one flexi-disc of an unreleased song each month; all 1,000 available subscriptions sold out immediately.

As for Matt Jones, he’s not content to kick back and relax in his cluttered office. Pirates Press recently introduced flexi-postcards, a five-by-seven color postcard with five-inch grooves that plays three minutes worth of music. Now that Jones has mastered printing records on paper and plastic, he’s thinking about other materials: “What if we could make a record that was completely non-petroleum-based? What about 100-percent hemp records? I’m trying to connect the dots between all of these industrial processes.” Considering the market for flexi-discs, just imagine the demand for sustainable-material records made in San Francisco.