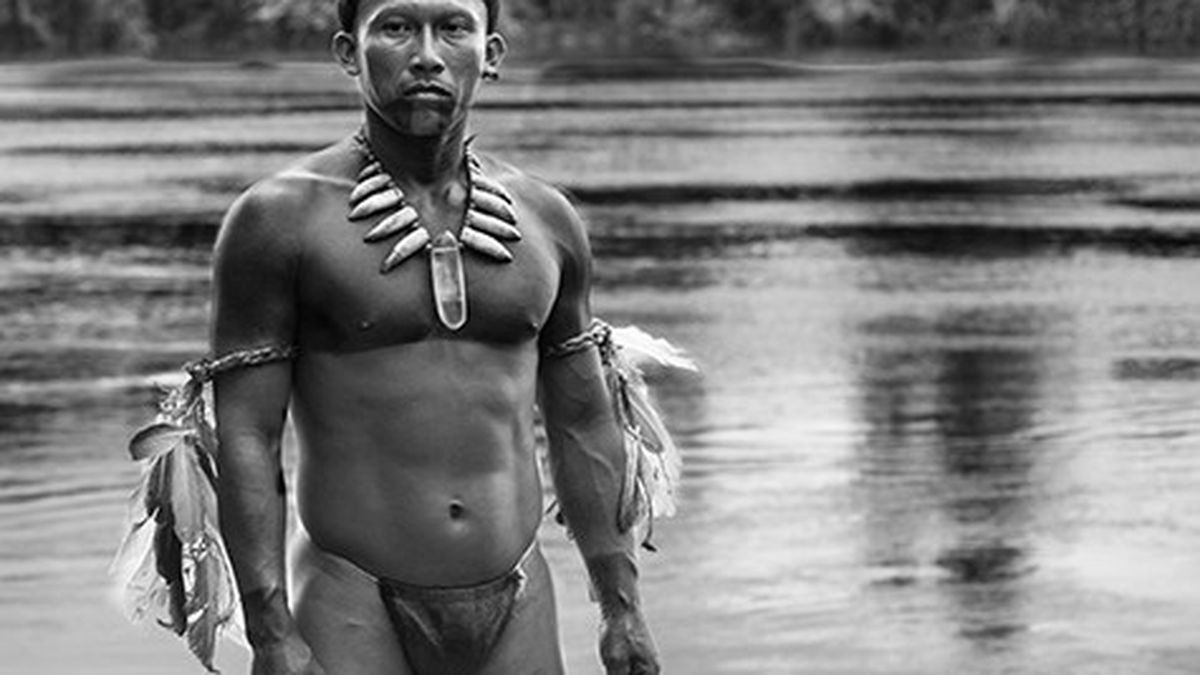 Just ask Karamakate in Embrace of the Serpent.

Some people believe in Olympian or chthonic deities. Others worship the internet. Still others rely on worldly philosophers and visions of humanistic social justice. Karamakate, the Native American protagonist of Ciro Guerra’s dizzyingly multi-chambered Embrace of the Serpent, puts his faith in the Earth and the things that grow on it — including coca derivatives such as mambe and caapi. The Medora caapi, when ingested, will take the user to the mother snake, the anaconda that fell from the sky, the mother of the river. The cradle of all who came before.

Karamakate lives alone in a strong hut in the jungles of extreme Southeastern Colombia, with the Amazon River system all around him. A survivor of the ruthless rubber barons’ depredations that killed his family, Karamakate considers himself the last of the Cohiuano people. As such, he’s full of bitterness toward strangers and skeptical of white people’s motives in general. So naturally he bristles when, sometime in the middle of the 20th century, a canoe arrives bearing a German scientist named Theo (Jan Bijvoet) and his manservant Manduca (Yauenkü Migue).

Theo is deathly ill, so Karamakate reluctantly gives him a shotgun snort of his magic powder. It works, Theo recovers, and the grateful visitor enlists the native to help him explore the territory. So begins Karamakate’s mindwalk, a forty-year interrupted odyssey that imagines the stoic Native American — portrayed as a younger man by Nilbio Torres, and as an older man by Antonio Bolivar — as guide and mentor to two curious foreigners. First Theo, then a generation later, Evan (Brionne Davis), who’s on the lookout for the yakruna, a sacred plant that can cure disease. Both men claim to be researching lost tribes and botanical rarities and such, but we suspect they’re actually looking to score some righteous dope.

Colombian writer-director Guerra, who based his screenplay (co-adapted with French-Colombian writer Jacques Toulemonde Vidal) on the diaries of a pair of ethnographically minded scientists, paddles his cinematic dugout into an irresistible corner of the world with the story of Karamakate and his bearded huespedes estimados. David Gallego’s black-and-white cinematography sparkles with hyper-realistic depiction of fantastic scenes. Waking dreams of the jaguar, the boa, falling stars, a tribe of young orphans brutalized into Christianity, the horrors of the rubber plantations, historical murals painted on cliffs for an audience of one. Both the native non-actors playing Karamakate delve deeply into his ethos, the touchstones of the world mover, who follows the law of the jungle with its need for respect and permission. (“Why do you whites love your things so much?” he asks.) Remedies and cures are paramount in the all-devouring selva: “Every tree, every plant, every flower is full of wisdom.” Karamakate explains things to Theo and Evan that they have always known but have forgotten, in common with other “modern, developed” people. It all makes perfect sense while gliding down the river.

Anyone who has thrilled to Aguirre, the Wrath of God; The Emerald Forest; Samuel Fuller’s documentary Tigrero: A Film that Was Never Made; Akira Kurosawa’s Dersu Uzala (once again, one of the old master’s most heartfelt films); or even Crystal Fairy & the Magical Cactus will find her- or himself in familiar yet utterly strange territory with Karamakate and his adventures. On the literary side, we could throw in William Burroughs and Allen Ginsberg’s The Yage Letters and Carlos Castaneda’s The Teachings of Don Juan as preambles.

But of course none of those are entirely necessary once we set out for the Workshop of the Gods. When we’re in the Embrace of the Serpent we’re really in the hands of Don Karamakate. “The river’s the anaconda’s son,” he asserts. “More real than what you call reality. Hear the song of your ancestors.” In actual fact, we heard that song a little too late to put Guerra’s 2015 release on our Ten Best list two months ago. But it richly deserves your attention.