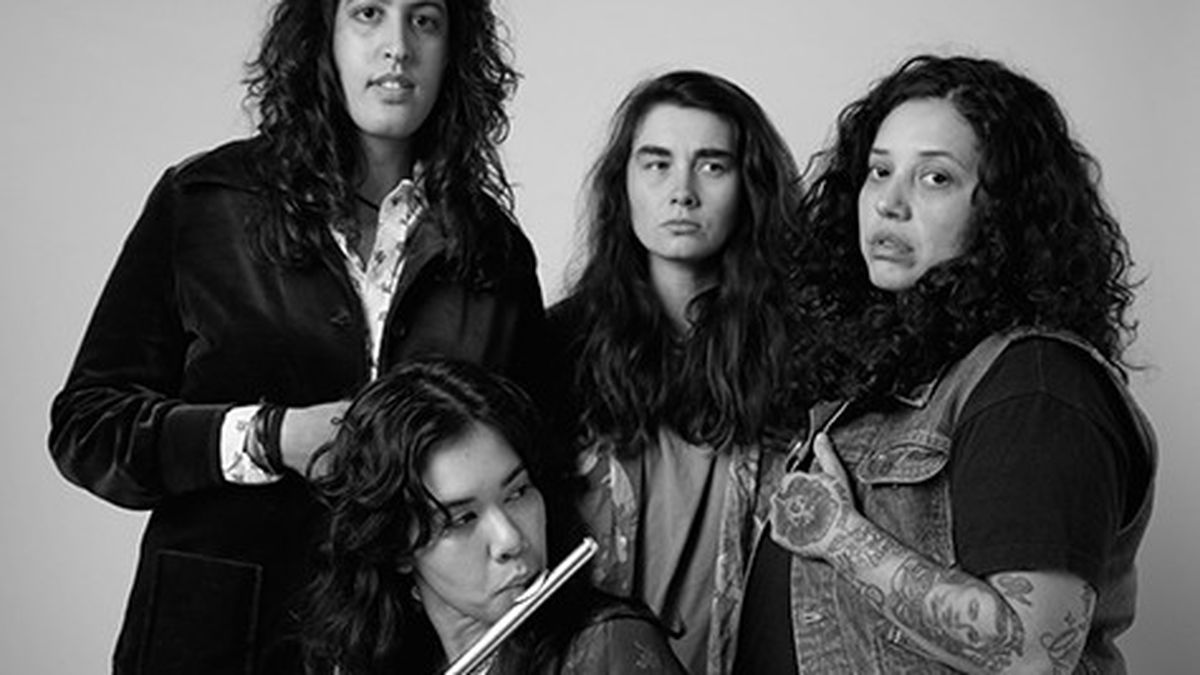 The Oakland four-piece's indulgent, psychedelic rock 'n' roll speaks to the band members' experiences as women of color with imagination and humor.

Oakland prog rock four-piece Queen Crescent doesn’t care much about satisfying patriarchal social norms. Musicians Amy Martinez, Andrea Genevieve, Melissa Vu, and Eden Savage — all of whom are women of color, and some of whom are queer — began playing together around three and half years ago. And while prog rock and psych rock are known in the United States and United Kingdom as the domains of nerdy white dudes, the four bandmates take inspiration from subcultures in countries such as Cambodia, Indonesia, Nigeria, and Mexico, where rock ‘n’ roll has historically been used as a form of resistance.

“We can’t just talk about getting fucked up, or going on tour and drinking whiskey, or whatever else bands talk about, because of our experiences as women of color, and as queer women,” said Martinez, the band’s drummer, during a recent interview in Queen Crescent’s practice space at Oakland Music Complex, a West Oakland warehouse. “We experience a lot of racism, and a lot of sexism, and a lot of homophobia,” she continued. “Even if it’s not directed at us … stuff like that that happens in our community affects us, too. So it’s like, we don’t have the privilege to speak about bullshit.”

Martinez is one of the organizers of San Francisco’s popular, soul music-themed queer party Hard French, and she spins vinyl under the stage name Brown Amy. Although she’s considerably popular in the Bay Area’s queer scene as a DJ and promoter, she’s also been drumming since the age of four. A few years ago, when she traveled to Portland for a DJ gig, she connected with Genevieve, who was living in Portland at the time and had plans to move to the Bay Area.

After Genevieve relocated to Oakland, the duo began jamming and eventually decided to start Queen Crescent. They recruited bassist Savage and flutist Vu to join the band, and Queen Crescent hit the ground running. Genevieve had friends in Mexico City and the bandmates made a spur-of-the-moment decision to perform there despite the fact that they had only recently begun playing together. Soon enough, they found themselves on an international tour.

“We had been a band for maybe eight months, and we went down there and [promoters] would be like ‘You’re headlining!’ And we’d be like, ‘What?!'” said Genevieve.

“Our shows would be at midnight but they’d have us show up at seven and give us shots,” added Martinez. “We were fucked up! We also were randomly on this TV show. It was wild.”

The members of Queen Crescent returned to Oakland excited to get back to work, and their self-titled, debut album, which came out a year ago, sees the band homing in on a sound that combines elements of hard rock from the Seventies (Genevieve cited Black Sabbath as a major influence, which is apparent in her hypnotic, dark guitar riffs) with bright, melodic vocals, sprightly flute, and a booming rhythm section.

The flute, in particular, is a key element of Queen Crescent’s sound. On Queen Crescent, Vu’s graceful playing accents the galloping rhythms that Genevieve and Pela weave together with bass and guitar, which often create action-packed riffs in tandem. Because it’s in a similar register, the flute often sounds like an auxiliary to Genevieve’s voice. Her direct delivery has the intensity of a call to arms, and her soaring timbre often evokes the sturdy-yet-resonant voice of Heart’s Ann Wilson.

A hallmark of Queen Crescent’s sound is its focus on elaborate, highly skilled instrumentation — a feature of prog rock that has earned the genre a reputation for self-seriousness. And though the band’s members certainly flaunt their ostentatious, high-voltage playing — with guitar solos, flute solos, vocal harmonies, and thunderous percussion stacked within each track — they also have a sense of humor that makes their music accessible despite its dense compositions and underlying sociopolitical themes.

For instance, Queen Crescent contains the songs “I Wish a Muthafucka Would” and “Majic Moonjynuh” in addition to ones with more sober titles such as “Ancestors.” In fact, when I asked about the moon reference in the band’s name, Savage joked that they almost called themselves Majic Moonjynuh because of a black-lit mural of a moon at their first practice space (and the moon as a feminine archetype, of course). Though the bandmates thought better of it, their work does occasionally showcase their offbeat, irreverent sense of humor.

When Savage brought up their former practice space, Genevieve and Martinez began sharing anecdotes from Queen Crescent’s early days. When the bandmates were writing the tracks for Queen Crescent, they found themselves in a feud with their neighbor — who, apparently, was a co-creator of the Spongebob Squarepants theme song.

“He’d be like, ‘Shut the fuck up.’ And we’d be like, ‘Fuck you,’ at like 3 p.m.,” laughed Martinez. “The last week we were there, I was praying to start my period so I could put some bloody tampons in front of his door. But I didn’t, so it sucked.”

It’s apparent that OMC is a better-suited home for the quartet. During our conversation, several neighboring punk bands’ rehearsals drifted in through the walls. Genevieve and Martinez reclined on the couch, and Savage sparked up a joint (Vu wasn’t able to join us). The bandmates discussed new tracks they’ve been performing that they want to put out as an EP before they begin developing their next full-length record, which they said will be a concept album — though, because it’s in its nascent stages, they wouldn’t share the theme.

“I’m hoping we find a space for five days and take a bunch of mushrooms and take all our equipment somewhere and get super fucked up and write a concept album,” said Martinez.

“Yeah, get weird in the woods and record everything we do,” added Genevieve. “And then listen back after that weekend, or however long, and extract songs from that.”

Correction: A previous version of this article incorrectly stated that Queen Crescent’s former bassist Eni Loicy Pela is still in the band when the bassist is now Eden Savage.

Your Terminator 5 Dreams Have Been Dashed, Thanks to Arnold’s Lovechild