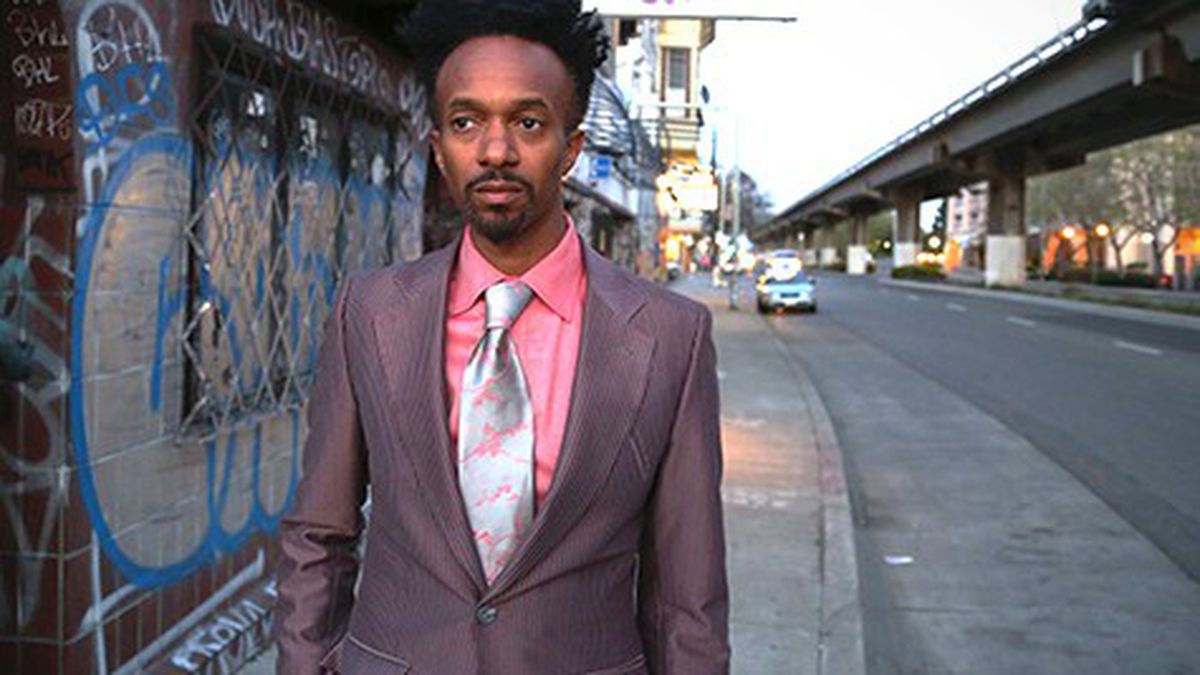 Clad in pegged red pants, a tie pinned beneath a checkered vest, Xavier Dphrepaulezz led his band into “Night Has Turned to Day.” A consummate performer known as Fantastic Negrito, Dphrepaulezz gesticulated to every nuance of the group’s groove: He shuddered to a low piano trill, buckled his knees to the last crack of a syncopated drum fill, and furled his eyebrows to a deftly bent guitar note, all while inflecting his elastic voice with several shades of soul.

“I’ll let them have it,” he shouted mid-song, turning to face the band, phone outstretched. A few onlookers in the spacious warehouse started to clap. They faltered for a moment, pondered proper rehearsal observation etiquette, and then whooped with renewed vigor.

“This guy, all you gotta do is Google him,” Dphrepaulezz said, gesturing toward the keyboardist LJ Holoman. “And Tomas,” he continued, gripping Tomas Salcedo’s shoulder, “I call him The Chilean.” Dphrepaulezz’s bandmates — Salcedo, Holoman, drummer Ruthie Price, and bassist Nate Pedley — call him X.

For years, Dphrepaulezz regularly ventured into Oakland with a guitar to perform on the street near clubs such as The Layover during peak nightlife hours. That’s how he met Salcedo and another key member of the Fantastic Negrito team, Tony! Toni! Toné!’s D’Wayne Wiggins, whose Mindseed Studios they practiced in.

A youthful-looking 52-year-old with a star tattoo on his head, Wiggins was among the few clapping onlookers. One night, he spontaneously stopped his car at the sight of Dphrepaulezz surrounded by a crowd on the street. “I’m always strapped,” Wiggins said. “So I pulled out the guitar and joined in.”

Upstairs from the elevator, Dphrepaulezz pointed out his music studio. One wall had an old poster promoting Xavier, his 1990s moniker during an ill-fated Hollywood phase. A handful of interns worked in another room. Beyond them, Wiggins, and his bandmates, Dphrepaulezz’s team includes a few more long-time friends fulfilling management and publicity roles.

Malcolm Spellman, Dphrepaulezz’s co-conspirator since childhood and currently a writer for the TV show Empire, lives in Los Angeles. Dphrepaulezz called his unit a “collective,” noting that he supported Spellman for years before his screenwriting career took off, a reciprocal partnership that dates back to their teenage years in Oakland.

Dphrepaulezz moved to Oakland with his family in 1979. His close relative, Ahmed Abdul-Malik, was the storied bandleader and jazz bassist who performed with luminaries such as Thelonious Monk, but Dphrepaulezz was initially indifferent to music. “Max Roach used to call the house,” he said. “I was like, ‘whatever.'”

Rather, Dphrepaulezz, said, “I’d dress crazy. I’d go up to where the rock ‘n’ roll people shopped and buy clothes and walk back to the ‘hood, then people would throw shit at me.” His family was conservative and strict; at twelve, he was banished, initiating a period of foster care. Dphrepaulezz and Spellman danced and collaborated on a number of street-level hustles for money. At the age of eighteen, inspired by the music of Prince, Dphrepaulezz taught himself to play piano.

“I read that Prince played everything, so I thought I’d do that,” he said. “I wrote my first song six months after touching a keyboard.”

After quickly mastering an array of instruments, he travelled to Hollywood and landed a deal through Interscope Records. The famous record man Jimmy Iovine inked the deal, and Xavier, as he was dubbed, secured the same management as Prince. His record advance was one million dollars. A Los Angeles Times article from 1996 compared Dphrepaulezz’s “multi-pronged talent” to Stevie Wonder and celebrated the release of his sole album, The X-Factor.

In 1999 though, a car accident ravaged Dphrepaulezz’s body. He awoke from a coma three weeks later, muscles atrophied and full of steel rods. Intense therapy followed, his label arrangement collapsed, and Dphrepaulezz eventually returned to Oakland.

For another source of income, he started licensing his old catalog through Los Angeles contacts, until his newborn son Kyu moved him to write new material.

“I couldn’t put him to sleep one night,” said Dphrepaulezz. “I had this one guitar that was out of tune and nasty, but I just played an open G major chord. He stopped crying, looked at me, and I felt chills. He was one and a half and it was the purest thing on earth.”

The moniker Fantastic Negrito occurred to him one day in his studio. He pitched the name — an homage to his background and the legacy of black musical forms in America — to one of his young marketing interns in the next room. Striking a nasally voice, he said, “They were like, ‘Absolutely not. White people don’t like saying negrito.’ But I just loved it.”

The intern was wrong; NPR liked it. The next day, Fantastic Negrito would travel to Washington for its victory performance. Dphrepaulezz’s manager was in Los Angeles, meeting with record labels. The past echoed into the present. “I have no animosity toward the record industry,” he said. “It was a lesson: You need a team, and the people are probably right in front of you.” Still, when asked about his outfit, he smiled and said, “I do love attention. I’m an exhibitionist.”