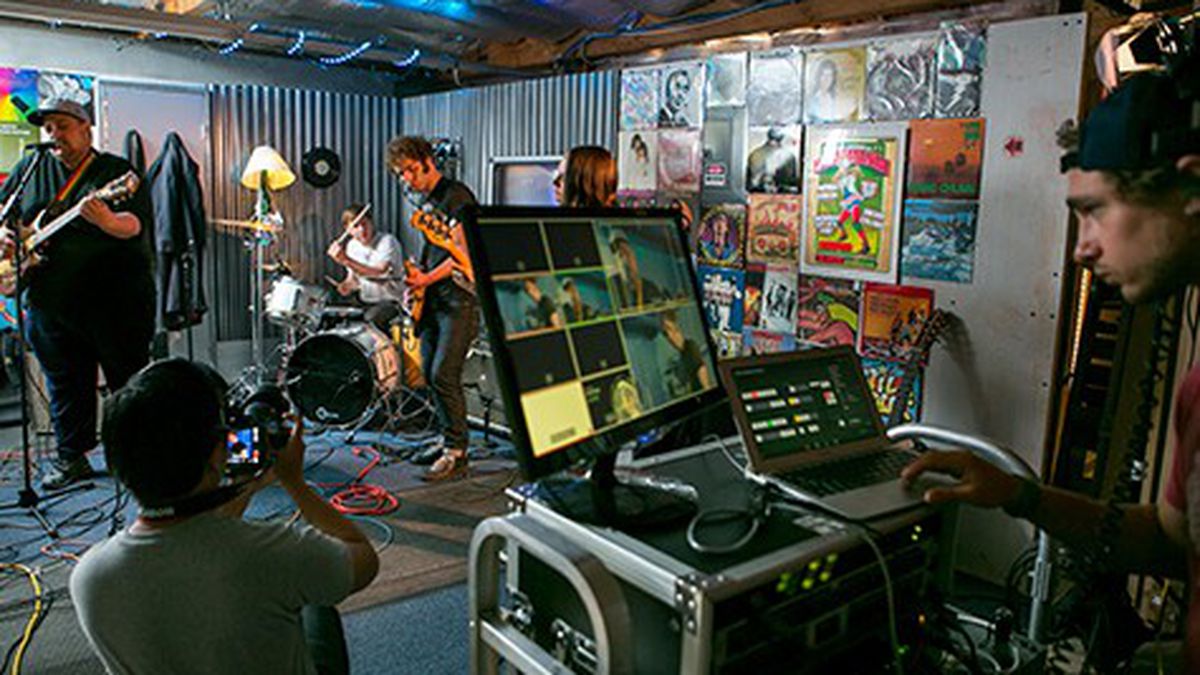 Anne Cook directed a busted red pickup into a South San Francisco parking lot and one half of the local rock outfit Swiftumz clambered out. Guitarist Barker Gee told Cook to mind the broken glass as she lifted equipment out of the back. In less than an hour, Swiftumz was slated to perform in The Bunker, a storage room above the headquarters of Pressure Drop TV, Cook’s livestreaming enterprise. The drummer, Brian Hamilton, tended to sudden nausea.

“We do some guerrilla shit,” said Cook, an ebullient 52-year-old with purple hair. “It’s pretty lean and mean.” The Bunker was a fallback, she explained, because the English Bentley collector who offered his garage full of luxury automobile carcasses reneged at the last minute. She described a location the week before as somewhere that the San Francisco Port Authority doesn’t issue permits for. At another set, the cops showed up in time for an encore.

At 2:30 p.m., I received an email announcing the Swiftumz livestream at 3 p.m. Hamilton sound-checked his snare drum: Thwack, thwack — “Can you toss me a beer?” — thwack, thwack. Bandleader Chris McVicker obliged, yanking a can from the cooler. The group moved slowly but deliberately, while all around members of the Pressure Drop team tamed thickets of cords and mounted video-camera battery packs. “The stream goes live at three whether we’re ready or not,” Cook noted.

At 2:55, Swiftumz ran through a song. At 2:58, the sound engineer, Krackamya Welch, whose usual gig is at Slim’s, expressed some concern with vocal mic placement. Regardless, at 3:01, McVickers stared into a camera and said, “Alright. Hello, internet,”

At that, the band tumbled into “Willy,” the opener on Everybody Loves Chris, Swiftumz’s most recent album. Maria Davenport walked down the fretboard of her bass, while Gee’s guitar leads lashed at McVicker’s dulcet coo. The earlier sense of dysfunction disappeared, supplanted by the purposeful groove of a live band. Likewise, the Pressure Drop team snapped into their roles: Cameramen hovered within inches of the performers’ instruments and faces while a switcher decided which shots to broadcast live. Cook monitored the response on social media.

Jeremy Solterbeck and Arnold Dizon run Pressure Drop alongside Cook. For now, the enterprise is underwritten by Trouble with 2, the video production company owned by Solterbeck and Cook. She pointed to Boiler Room — the heavily sponsored and popular DJ set video series — as a model for sustainability and mentioned plans for an app. Meanwhile, Cook is looking to reflect the local underground in a Pressure Drop archive, capturing singular performances in alternately novel and intimate settings.

The view count so far is modest, but local acts are enthusiastic and publicists are coming around. Cook noted excitedly that she recently turned down a rising band. “They’ll be on Live 105 in a couple of weeks but they’re just so cheesy,” she said. “I couldn’t do it.”

Pressure Drop is only the latest of Cook’s myriad media endeavors, which she rattled off at the clip of an industry lifer who prioritizes now over then. There was her tenure at Dan the Automator’s label, 75 Ark Records, nurturing canonical local hip-hop titles such as Deltron 3030 and The Coup’s infamous Party Music. Then, the indie movie El Presidente, which anticipated white audiences’ frenzy for Lucha Libre wrestling, and that dovetailed into livestreaming mixed martial arts before either of those things were massively popular. Tiring of fight promoters and distributors, however, Cook looked back to music.

Originally, she envisioned Pressure Drop as more of a genre-agnostic endeavor. She reached out to East Oakland’s Panamanian-American hip-hop duo, Los Rakas, with whom she’d previously worked in a licensing capacity. “They wanted something with kids and a garden and I was like, huh, okay,” she said. “So, that turned me into a location scout, too.” Since August of last year, when Pressure Drop began livestreaming regularly, the roster has skewed more punk and garage. Cook lamented the decline of the MC and DJ dynamic in rap, noting that it’s negatively impacted live shows. Rock groups, however, still hone their craft in concert.

Pressure Drop’s archive nobly foregrounds bands that have had little hype but are formidable: There’s Quaaludes in the KUSF studio, candidly sniping about being an indie-pop band between riotous punk tracks; Musk at the Albany waterfront; local songwriter Michael Beach’s merciless post-punk outfit Shovels, unfurling with a lighthouse in the background; and, in one of the minority out-of-town features, incisive Memphis punk foursome Nots in a remote ravine.

Pressure Drop’s most widely viewed installment features Tony Molina performing acoustic with a rotating cast of friends in Aquarius Records for seated onlookers. Molina — who moves between thuggish hardcore bands and the honeyed, concise pop of his solo material — introduces Violent Change’s Matt Bleyle by saying, “I used to be in this band called Violent Change, man. They kicked me out. It was weird. … But the singer, Matt, is one of my best friends and my favorite songwriter of all-time.”

Then, the two of them play “Walmart Parking Lot,” the closer from Violent Change’s eponymous debut, one of the finest local rock statements of 2013. It’s a beautiful impression of the original song that brings out its curiously skewed melancholy. Further, the video joins two of the most distinct characters in local rock’s recent memory. Plus, they’re in one of the few extant Valencia Street outposts that can rightly be described as an institution for local music. In other words, it won’t happen again, but Pressure Drop was there at the decisive moment.

Next ArticleWednesday Must Reads: Governor Bans Secret Grand Juries in Killings by Police; Raiders Make Their Pitch for LA Stadium