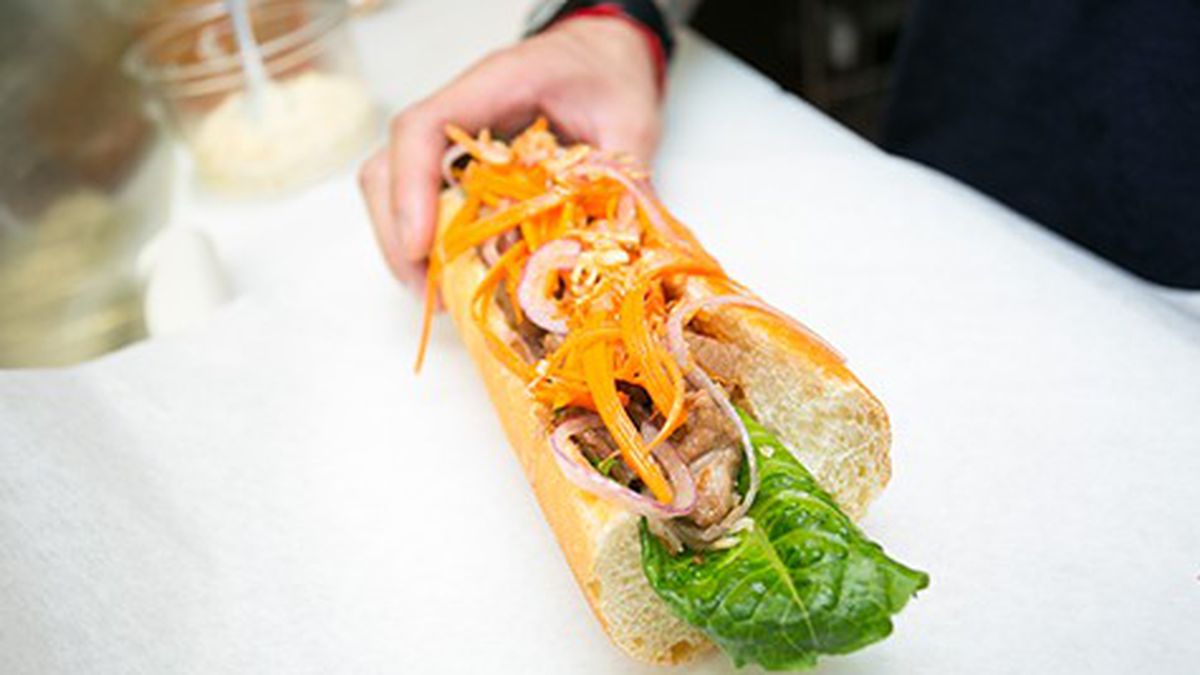 Pop: The Best Sandwiches Sold in a Convenience Store

To get to POP Sandwich, a permanent pop-up deli in Uptown Oakland, you have to walk through the Chez Mado convenience store — past the shop’s eclectic inventory of soda, candy, cellphone accessories, and electronic cigarettes.

In back, a sparse deli case features bowls of peeled garlic and Thai bird chilies, the most gigantic tub of sambal oelek chili sauce I’ve ever seen, and one of those lucky Japanese cat figurines waving its paw at you. The cramped “kitchen” consists of little more than a single portable induction burner.

But this is Oakland, city of myriad hidden culinary delights, so of course the back of what is essentially a vape store is where a fine-dining chef would decide to set up shop.

By taking up semi-permanent residence in Chez Mado’s vacant deli section, he couldn’t have gone further from fine dining.

The restaurant is named after an art collective that started out doing graffiti together in the 1990s. A few other members are investors in the venture, but for all practical purposes, De Leoz is POP’s bearded and tattooed staff of one — he washes the dishes; he sweeps the floor. He also preps and pre-cooks most of his ingredients at an off-site kitchen, trundling them over by bicycle in a messenger bag.

No one is going to POP for the ambience, though if you’re like me, you might find the whole grungy, cool-uncle’s-basement vibe oddly appealing. A wall of “slap” tags (sticker-art graffiti) is the only notable décor feature. A summer menu taped onto the deli case hadn’t been replaced, even though it was November. The only seating was a haphazard cluster of chairs — more of a waiting area than a dining area.

The only thing that POP has going for it is the sandwiches themselves. But it turns out that’s more than enough. Each one is so thoughtfully conceived and skillfully executed that you’d never guess that it was assembled in the back of a convenience store.

Although they aren’t advertised as such, POP’s sandwiches are all loosely banh mi-inspired — topped with lightly pickled carrots and onions and served on crusty baguettes that De Leoz buys from a Vietnamese bakery in East Oakland.

The original inspiration for the venture, De Leoz explained, was a recent trip to Saigon, where he became enamored with a street cart that sold a mind-bending egg and cheese sandwich — the eggs were deep-fried in an oil-laden wok; the cheese was Laughing Cow’s spreadable variety (which is hugely popular in Vietnam, it turns out). De Leoz serves a slightly modified version that features a broken-yolk fried egg — an egg cracked into the pan and scrambled lightly so that the white and yolk stay separate. The sandwich is basically made up of three simple components: egg, cheese, and house-made sambal aioli. But the combination of the three is just killer — the juiciness of the eggs, the gooey richness of the melted processed cheese (haters be damned, an indispensable addition), and the undercurrent of sharp chili heat. The $6 sandwich, listed simply as “egg and cheese,” doesn’t jump off the menu (I nearly skipped it), but it might be the most addictive dish I tried.

Not that there wasn’t plenty of competition. The most popular menu item might be the pork adobo sandwich, for which De Leoz drew on his Filipino heritage and, specifically, his mother’s adobo recipe, which involves slowly braising pork shoulder in a mixture of soy sauce, vinegar, brown sugar, and aromatics. Cut into big chunks, the fork-tender pork had just a hint of adobo tang, and a slather of sambal aioli added both moisture and heat. A sprinkling of crispy fried garlic put the whole thing over the top. It was a damn good sandwich.

Despite the humble setting, the amount of care put into each sandwich was impressive. De Leoz sliced tomatoes (off-season though they may have been) to order, and the immaculate-looking lettuce leaves in the deli case had been individually washed and dried. Each sandwich gets tightly wrapped twice in butcher paper — once before being cut it in half, once after to hold the whole thing together.

Perhaps the most technically impressive of the sandwiches featured chunks of white-fleshed mahi-mahi cooked confit (immersed in olive oil, various herbs, and aromatics) — incredibly moist, with wonderful jiggly bits of fish “jelly.” Add chopped cornichons and a hit of whole-grain mustard, and the sandwich knocked the socks off of any tuna salad sandwich I’ve eaten in recent memory.

Really, though, I didn’t hit any duds. A chicken sandwich that De Leoz recently added to the menu featured meat from a whole bird that he’d brined and roasted ahead of time (tender enough to inspire jealousy), lettuce, tomato, avocado, and a fiery chipotle aioli — the spiciest of the house-made condiments I tried. A vegetarian squash curry option initially inspired skepticism: sautéed vegetables, tofu, and a creamy, cooked-to-order coconut-milk curry — on a sandwich? But I loved the blocks of sauce-absorbing Hodo Soy tofu (cut to a medium dice) and the crispy fried-shallot topping. Another smart touch: Wilted basil leaves acted as a flavorful buffer that kept the bread from getting soggy.

You’re out of luck if you want anything to eat with your sandwich beyond a soda, a bag of corn chips or Funyuns, or one of Chez Mado’s other assorted junk food offerings. De Leoz said he used to offer a few side dishes (potato salad, boiled quail eggs, and such) but none of them sold well. No one was looking to buy anything that fancy in the back of a convenience store, he speculated.

Someday, De Leoz said, he’d like to open a stand-alone version of POP nearby, with a bigger menu and maybe even a couple of employees. That will be a happy day — I’d like to try those quail eggs. Until then, I’ll just have to settle for some of the best sandwiches in town.