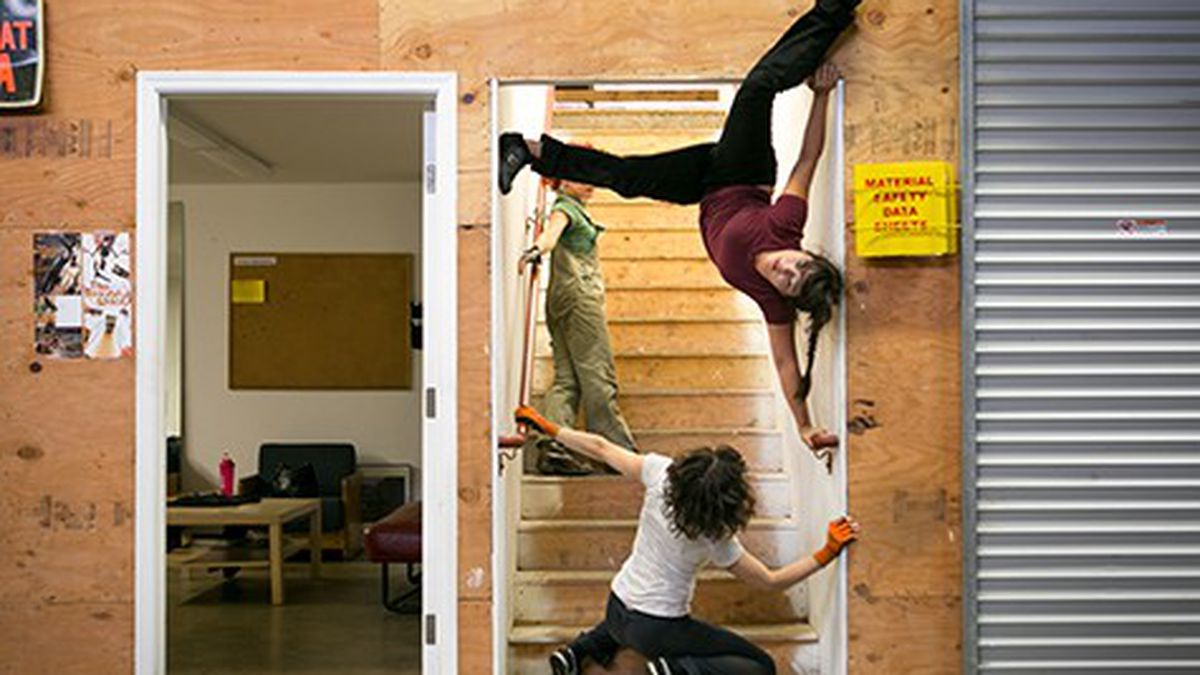 Poetic Gestures and Beyond: This Season in Dance

Most things in the Bay Area come with a twist — whether it’s an experimental leaning, a political undertone, or a feminist inflection. That’s what keeps life pleasingly complex. This season of East Bay dance is no exception. From September through February, a number of outstanding performances will challenge one’s expectations of dance.

Award-winning San Francisco choreographer Lizz Roman will bring one of those multidisciplinary performances to the East Bay with This Beautiful Space “[email protected]” Roman’s signature style of choreography attempts to unravel the dynamics of an architectural space through movement. For This Beautiful Space, Roman and her company of nine dancers will map CIVICCORPS Job Training Center (1425 5th St., Oakland) through emphatic gesture. They will bound off walls, tumble down staircases, and swing from ceilings, transforming the utilitarian building into a collaborative apparatus. The size of the audience will be limited so the group can be easily led through the building to witness the graceful acrobatics. The inventive Bay Area modern dance music specialists WaterSaw will perform a live, original score. Performances will take place every Friday and Saturday evening from September 11 through 26 (LizzRomanAndDancers.com).

Also in September, Smuin Ballet will present its Dance Series One, which will feature the anticipated unveiling of Smuin’s young choreographer-in-residence, Amy Seiwart, who is currently at the forefront of Bay Area contemporary ballet with her inventive, sculptural dance pieces. The yet-to-be-titled work will be set to a composition by musician Julia Kent, who works with looped cello, found sounds, and electronic manipulations. The series will also include the world premier of Maslow, Smuin company member Ben Needham-Wood’s new original piece set to a score by composer and cellist Ben Sollee. Wood’s choreography is inspired by the American psychologist Abraham Maslow’s theory of “self-actualization.” Dance Series One will also mark the return of Ma Cong’s quick moving French Twist, a playful piece inspired by the Forties and Fifties cartoon Tom and Jerry and Michael Smuin’s own stunning floral embodiment, Bouquet. The series will begin at Lesher Center for the Arts in Walnut Creek (1601 Civic Dr.) on September 18 and 19, then move on to the Mountain View Center for Performing Arts (Sept. 24–27) and finish at San Francisco’s Palace of Fine Arts (Oct. 1–4). (SmuinBallet.org.)

October will bring Dimensions Dance Theater’s The Town on Notice, a performance that will combine dance, live music, spoken word, and stand-up comedy to confront the topic of gentrification in Oakland in a manner meant to stir meaningful dialogue. Dimensions, a prominent Bay Area African-American dance company, will put on the performance at Malonga Casquelourd Center for the Arts (1428 Alice St., Oakland) for one night only on October 17. The Town was conceived and directed by Dimensions co-founder and artistic director Deborah Vaughan, and will feature choreography by longtime Dimensions dancer Latanya Tigner and El Wah Movement Dance Theatre director Colette Eloi. The score was composed by Korean-born and Oakland-based JooWan Kim, founder of Ensemble Mik Nawooj, the Bay Area group popular for blending classical, jazz, and hip-hop. Kim will perform live on piano, accompanied by percussionists. The show will also feature spoken word by East Bay poet Marvin K. White, and comedy by Micia Modely. (DimensionsDance.org.)

In December, the East Bay’s Bandelion (of Dandelion Dance Theater) and Randee Paufvé and Santa Fe New Mexico’s Theater Grottesco will collectively present Blessed Unrest II at the Temescal Arts Center (511 48th St., Oakland). The interdisciplinary performance will be a hybrid of dance, live music, original stories, and physical theater — a style of narrative performance that focuses on movement as its foremost vocabulary of expression. The piece is meant to explore those “Yes!” moments in life and the challenges that keep us from achieving them, inspired by the notion that the artist is constantly working toward new goals, feeding an endless creative hunger. Blessed Unrest II stems from a multi-year artistic collaboration involving each of the groups facilitated by the Network of Ensemble Theaters’ national exchange program, which is designed to connect performers from various disciplines in order to foster an increasingly vibrant stage for non-hierarchical collaboration. In a recent interview, Dandelion performer and co-director Eric Kupers described the work as a collection of short stories and poems. Blessed Unrest II will take place on December 18 and 19 (DandelionDanceTheater.com).

In January, Interface Gallery will host Bodily Engagements, a series of four two-week long projects each curated by a different dancer or visual artist. The goal of the series is to create a dialogue between movement and visual art by presenting four visual art exhibitions that will each involve performance elements. The series will total at least fifteen performances. The curators for the series include Abby Crain, Lisa Rybovich Crallé, Brontez Purnell, Lauren McKeon, and Sophia Wang — who, along with Crallé, organized Heavy Breathing, this summer’s successful critical-theory-aerobics-class series (see “Fitness for Your Brain,” Culture Spy, 6/24). Most curators will both perform and employ other artists to take part in their portion of the projects, and many of the curators will also collaborate with each other. Wang, for example, is working with Crallé to set up an environment of interactive sculptures that will inform ongoing improvisational group performances in the space and invite viewers to stage their own improvised interactions — themselves becoming the performers — in the artists’ off time. Wang will also work with Brontez Purnell to present a movement and video project, entitled Fake Autobiographies, about a multi-racial couple living in Berkeley in 1967. The piece will transform the gallery into an immersive film set, which will be used for workshops and live performances. (InterfaceArtGallery.com.)

In February, Pauvfé Dance Company will present Strangers Become Flowers, an evening-length dance performance by seasoned East Bay choreography Randee Paufvé that’s based on a Norwegian fairytale about the kindness of strangers and the potential to reinvent oneself upon meeting someone new. The piece is inspired by Paufvé’s experience traveling through Europe alone and meeting strangers who were remarkably kind to her. Using mostly foreign music, the performance is being designed to make viewers feel as if they’re in an unfamiliar setting, as Paufvé felt at the time. It draws the audience through a nuanced narrative that has to do with the decision to trust someone you just met. Paufve’s dancers are based in a wide range of disciplines, from ballet to Aikido, and they will each bring their own tinge of that influence to the modern choreography. Strangers Become Flowers will be performed at ODC Dance Commons (351 Shotwell St., San Francisco) on Saturday and Sunday evenings from February 6-14 (PaufveDance.org).