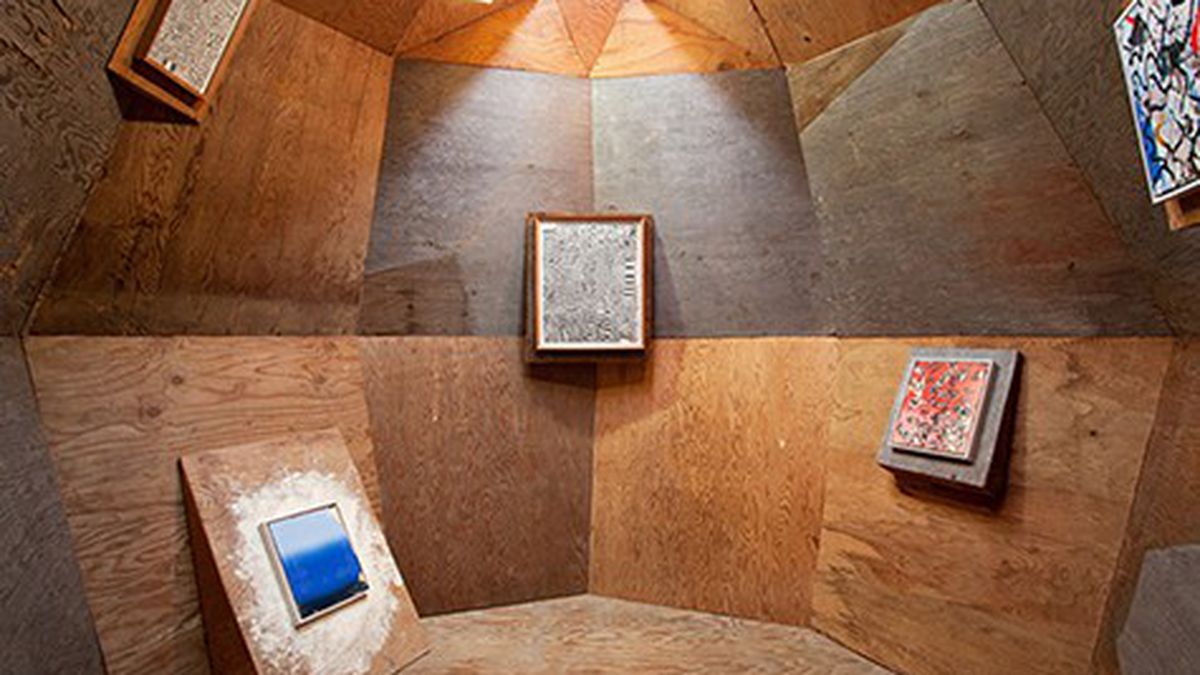 From Interventions to Architecture: An Array of East Bay Art

This fall, the local art landscape will be populated with a sprawling range of conceptual and visual artworks.

Fall always brings a lush wave of new shows to galleries in the East Bay and beyond. In the past, that influx has formed into prominent themes — a wariness for the future, a concern for the environment, or a desire to break down boundaries. But this season promises to be more slippery. Following a much-needed summer of thoughtful shows centered on the African diaspora and the value of Black life in America, this fall’s visual arts calendar is less pointed and more contemplative, presenting a wide range of concepts and histories that inform contemporary culture.

To start, the Mills College Art Museum (5000 MacArthur Blvd., Oakland) will be opening Public Works: Artists’ Interventions 1970s-Now on September 16 to run through December 13. The vast show will feature a fierce lineup of female artists who innovated in the realm of public practice — performances and interactive works staged in public space or online. Reaching beyond the understanding of art as a physical product, these actions and experiences bring up conceptual puzzles for the audience and prompt consideration of the meaning of “public” as it relates to both space and expression. The exhibition will include Amy Balkin, Tatyana Fazlalizadeh, Coco Fusco, Susan O’Malley, and Favianna Rodriguez. It will also feature new commissions and a programming calendar packed with collaborative events — a pleasingly appropriate addition. (MCAM.Mills.edu.)

Other conceptual highlights include Tom Comitta’s First Thought Worst Thought at Royal Nonesuch gallery (4231 Telegraph Ave., Oakland) in Temescal from September 12 to October 18. The show will pit the limitations of the book medium up against its utopian potential by exploring methods of speed-writing. The gallery will be transformed into an archive of forty books — an exhibition catalog, a children’s book, a cook book, a piece of erotica — that Comitta wrote using a variety of digital tools, ranging from copy and paste to online text generators, as well as analog forms of hand writing and photography. Each will be displayed with visual accompaniments, such as sketches, video, and interactive software to draw in the viewer. The exhibit will close with a three-hour speed-writing workshop in which participants will write and publish a novel in one sitting. (RoyalNonesuchGallery.com.)

At Aggregate Space (801 West Grand Ave., Oakland), Minji Sohn will present a performance and installation entitled Again, and Again, and Again from October 2 through November 7. The endurance-based performance will be made up of repetitive actions in a stylized landscape inspired by memories of her youth — endlessly filling buckets with sand, counting an unending pile of books, and continuously checking for monsters under the bed, behind curtains, and around corners — forming a dreamscape with the underlying foundation of hopelessness. (AggregateSpace.com.)

In the area of sculpture, Vessel Gallery (471 25th St., Oakland) will continue its practice of pairing two-dimensional visual artists with sculptors throughout fall and winter. Highlights will include the work of Cyrus Tilton in the show Seeking Balance (Oct. 1–Nov. 14). Tilton’s works often function as physical metaphors rendered in white clay, expertly evocative and ripe with emotion. His sculptures will be paired with paintings and works on paper by David Burke and Kyong Ae Kim. Later, in February, Vessel will host concurrent solo shows by Ron Weil and Bella Feldman. Weil creates abstracted landscapes with incredible depth by manipulating charcoal powder on paper with everything from a vacuum cleaner to a syringe (See “Oakland Artist Ron Weil Evokes Immersive Worlds with Peculiar Techniques,” 9/10/14). Meanwhile, the prolific, visionary sculptor Bella Feldman creates deeply thoughtful and whimsical contraptions out of metal (see “Reflecting on the Work of Bella Feldman,” 10/16/13). Although the two shows — which should not be missed — are meant to stand alone, they will likely complement each other’s mutual gloomy undertones. (Vessel-Gallery.com.)

Tamra Seal, a sculptor whose work could be distantly indebted to that of Feldman, will be showing at Pro Arts (150 Frank H. Ogawa Plaza, Oakland) in a currently untitled solo exhibition from September 29 through November 13. Like Feldman, Seal’s sculptures are often angular interjections into space that aesthetically reflect contemporary culture. But rather than metal, Seal’s material of choice is transparent, neon-colored plastic, which she often arranges in a futuristic fashion as an attempt to recreate two-dimensional images from movies. Often eliciting an unnatural glow, her work manages to be both fun and eerie — as well as perpetually relevant in the digital age. (ProArtsGallery.com.)

In the field of painting, the new Athen B gallery in downtown Oakland (1525 Webster St.) will be presenting Condition, a group show of bold painters whose — often large-scale — work uses traditional European styles of figurative painting to render updated content in a way that’s both familiar and innovative. The show will feature new collaborations between Ever Siempre, Franco Fasoli (Jaz), Troy Lovegates, and Zio Ziegler, as well as solo works, and will take place September 4 through October 2. After that, Athen B will take the theme of collaboration to the next level with co·lab (Oct. 10–Nov. 7), a group show featuring original pieces made by nineteen pairs of artists who have never worked together before, blending their distinct styles. A collaborative example plucked from the glowing lineup of local talent is Lauren YS and Meryl Pataky. YS specializes in colorful, anime-influenced paintings of badass school girls and squids while Pataky mostly makes neat, clever neon sign sculptures. (AthenBGallery.com.)

At Johansson Projects (2300 Telegraph Ave., Oakland), yet another collaborative painting exhibition will take place — this one more of the Barry McGee and Margaret Kilgallen sort. In Concert, featuring the works of artistic couple Jay Nelson and Rachel Kaye, will run from September 4 though October 31. The show is the married duo’s first exhibition together outside of group shows, although they often work in tandem out of a handmade studio that’s attached to their home on the outskirts of San Francisco. While Nelson is better known for his inhabitable wooden sculptures, he will be showing abstract paintings that mirror his subconscious, alongside Kaye’s more colorful but similarly gesture-based paintings. Both will be hung on a custom-built lattice and other housing structures that will transform the gallery (JohanssonProjects.com).

In regards to photography, the standout exhibition will take place at the David Brower Center (2150 Allston Way, Berkeley), in its annual Art/Act exhibition, which highlights one exceptional artist working in the intersection of art and activism. This year, the show will feature photographer Edward Burtynsky, whose imposing large-scale works depict landscapes devastated by the extraction and consumption of natural resources. The show will draw primarily from Burtynsky’s series Water, which shows aerial views of landscapes that look like captivating patterns from afar but are revealed to be ravaged environments upon closer inspection. The grandiose images are most evocative in their simultaneous depiction of the power and vulnerability of our natural environment. Art/Act: Edward Burtynsky will take place from September 18 through February 4 (BrowerCenter.org).

And for uncategorizable, multidisciplinary shows, Krowswork gallery (480 23rd St., Oakland) is always a reliable resource. Among its upcoming exhibitions this fall is a solo show by Shalo P entitled Valley. Shalo P works primarily in video, creating otherworldly works that draw upon surreal and sci-fi traditions in a manner especially apt for the internet age. Shalo P’s videos will be on view alongside a sound installation and graphic-novel style narrative drawings (Oct. 17–Nov. 7). That will be followed by Sonya Rapoport: Final Works (Nov. 14–Dec. 12), a show celebrating the late titular artist, whose work was a pioneer in the fields of digital-based and feminist art and also dipped into the realms of science, anthropology, and alchemy. Rapoport died in June, but amassed a prolific and endlessly fascinating body of conceptual work throughout her career. (Krowswork.com).

Come 2016, the sorely missed Berkeley Art Museum will be re-opening in its new, state-of-the-art building in downtown Berkeley (2155 Center St.). Appropriately, its first major exhibition will be Architecture of Life, an international selection of more than 200 works — including art, architectural drawings, models, and scientific illustrations — ranging from the past 2,000 years that will fill all the gallery space in the sprawling, new museum. The goal of the radically interdisciplinary show is to draw new connections among rarely seen works that point to a connection between physical architecture and ones personal structure of reality — life experience, self, and the psyche. The exhibit will run from the grand opening of the museum on January 31 through March 29 (BAMPFA.Berkeley.edu).

Correction: A previous version of this article misstated the address for the new Berkeley Art Museum. This version has been corrected.
Facebook
Twitter
Previous articleStan Ridgway
Next articleWednesday Must Reads: Coliseum City Developer Gets Chilly Reception; Near-Super Majority of Californians Like Obamacare
18,637FansLike
0FollowersFollow
67,429FollowersFollow