If you blinked (or spent the long weekend sleeping off Thanksgiving’s gustatory excesses) you missed it, but the latest Bay Area restaurant to get in on the Cronut craze was Pizzaiolo (5008 Telegraph Ave., Oakland), whose morning coffee-and-pastry program is one of the best in town.

The Cronut, for the uninitiated, is New York City pastry chef Dominique Ansel’s croissant-doughnut hybrid, a pastry so wildly popular that it’s spawned imitators all around the country — a one-day pop-up at Stag’s Lunchette was the most prominent East Bay appearance. This past Friday and Saturday mornings, Pizzaiolo sold a miniature version, dubbed the “Cronini,” for $3 a pop, and it was outstanding: all of the flakiness and crunch you’d want from a fried croissant; a smooth, refreshingly cool pastry cream filling; and a sweet (but not cloying) white glaze on top. 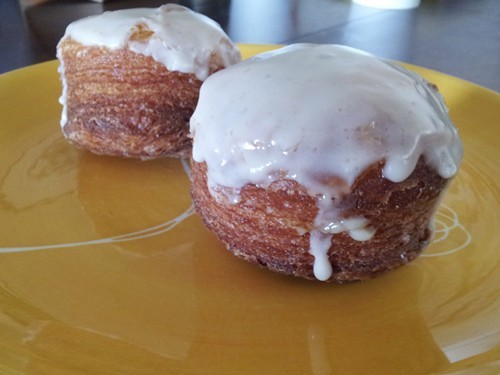 I’m told the Cronini were a one-shot deal — a lil’ something special for the holiday weekend rather than an attempt to launch Oakland’s next big fried-dough phenomenon. In fact, the restaurant appeared to have done nothing to promote, or even inform customers about, the special. (I only found out thanks to a tip from fellow food writer Cynthia Salaysay.) Truly, though, this was the first faux Cronut I’ve tasted that made me understand the hype. For those of you who missed out: Here’s to hoping that if you make enough of a clamor, maybe Pizzaiolo will bring the Cronini back — at least for an encore or two.