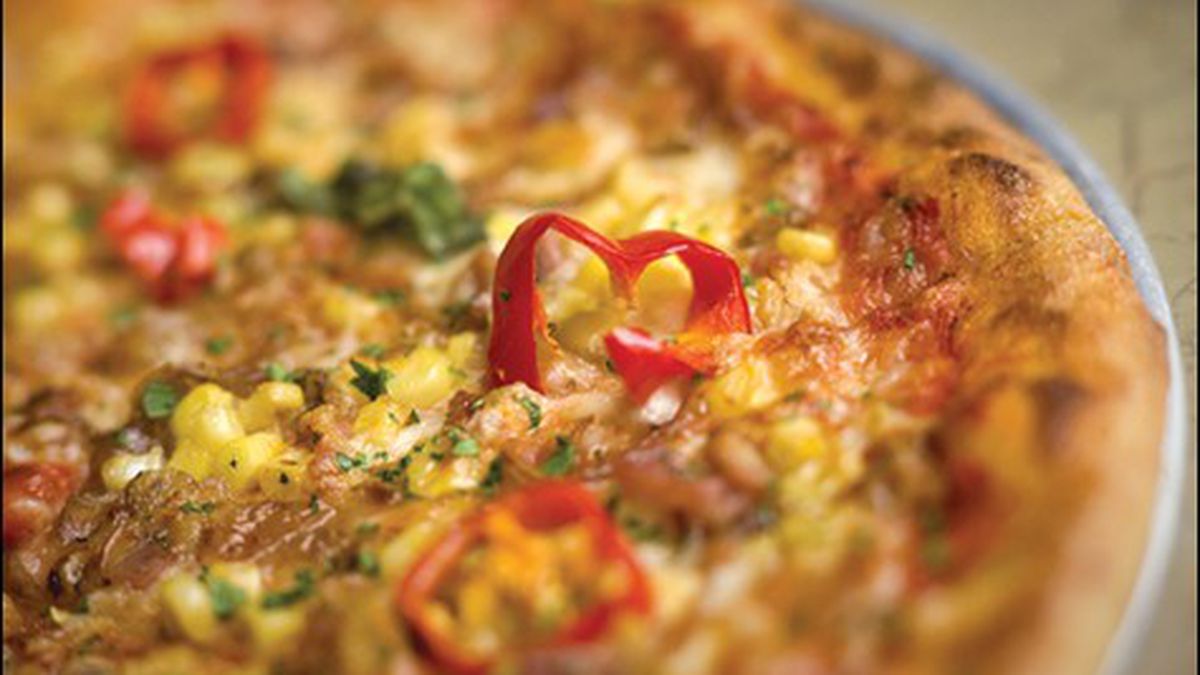 Paisan continues the California-style pizza revolution in a city that just can't get enough.

Back in the simpler days of Chef Boyardee and powdered Parmesan, a pizza was just a pizza. Sure, there were rumors around town of bizarre variations like Chicago deep dish and New York thin crust and big slabs of burbling mozzarella baked in glowing Neapolitan ovens, but they seemed as distant as squirrel stew or pickled pig’s feet. Then Chez Panisse and Oliveto started baking delicately crusted wood-fired pies topped with artisan cheeses and salumi and organically raised produce, and California’s contribution to the global pizza tradition was born.

Since then, the feathery crust/gourmet topping gospel has spread and flourished, especially in the Bay Area, with places like Pizzaiolo and Pizzetta 211 pushing the pie-crafting envelope. Berkeley has been an especially fecund center of the nouvelle pizza movement: at Arinell, Cheeseboard, Gioia, Pie in the Sky, Emilia’s, and others, summer squash, wild nettles, and poached eggs complement the likes of artisan sopresetta, Monterey Bay squid, and Fatted Calf sausage on pies that are at once imaginative, organic, and downright tasty. In the past few months alone, Addie’s, Locanda da Eva, and PIQ have added their own particular pizzazz to the city’s pizza zeitgeist.

And now there’s Paisan, which opened in mid-August in a former antique store in West Berkeley’s increasingly tony San Pablo/Dwight nexus. Here, Neapolitan pizza chef Francesco Pece crafts California-style pies far removed from the simple thin-crust creations of his homeland, showcasing farm-fresh produce and high-end proteins on the chewy sort of crust Californians seem to prefer to the insubstantial East Coast version. Paisan is owned by Cindy Lalime and Haig Krikorian, who also operate Sea Salt next door, as well as Fonda, T-Rex BBQ, and Lalime’s, all in Berkeley. Their establishment is handsome and welcoming in a California Casual sort of way, with exposed brick, rough timbers, and floor-to-ceiling windows that look out on San Pablo Avenue. Napery-free wooden tables feature serve-yourself stainless steel utensil canisters, and beyond the L-shaped polished-burl bar is an open kitchen. Out back, a courtyard beckons with stone pathways, garden sculptures, tables, and benches for al fresco dining. Stacks of firewood are intended for the unique two-door pizza oven, which can be accessed from both the patio and the kitchen inside.

The pizzas themselves vary in quality, depending on what you order. The basic mozzarella-tomato margherita is a good benchmark at any pizzeria, but Paisan’s isn’t particularly exciting: minimal cheese and pretty good tomato sauce on a crust just this side of tough. The more abundantly topped pies (pesto-arugula, calamari-aioli, potato-artichoke) fared better, with a nice balance of cheese, protein, and crust. Our favorite was a soft-textured pie in which mild padrón and spicy berbere peppers combined with sweet corn kernels, grilled onions, smoky prosciutto, and a lush layer of melted fontina into a creamy, zesty treat.

There’s more to Paisan than pizza, though. Crisp, hot arancini (ricotta fritters) filled with molten gorgonzola is a good way to kick off a meal. One of the lunch menu’s big, bountiful sandwiches featured enormous tender yet spicy meatballs covered in gooey mozzarella and a sweet, creamy Bolognese made with fruit from Sunol’s tiny Baia Nicchia tomato farm. The salad selection included a light, brisk semi-Caesar of spicy chicory, a touch of garlic and lemon, and supple white anchovies; a dreamy-creamy caponata made with sweet peppers, onion, olives, and perfectly supple eggplant, served on a bed of frisée and mizuna with lots of tangy ricotta; and silky-smooth faro accented with almonds, celery, garlicky cranberry beans, and fresh thyme, a perfect early-autumn dish.

For the pasta course, we ordered pasta fasul, primarily because it’s mentioned in “That’s Amore,” but even without Dino’s recommendation it was a winner: a simple, satisfying platter of al dente penne, supple tomato sauce, earthy cranberry beans, and chunks of smoky bacon. Another piatta rustica featured tender strips of seared Napa Valley lamb served on a chewy, naan-like flatbread with red and yellow tomato, fresh basil, spicy green olives, and bits of artichoke and eggplant: a hearty if not especially exciting snack. But the trippa napoletana (braised stomach lining to you) was as rich, homey, and satisfying as a fresh-from-the-hearth farmer’s supper, featuring slender filets of chewy, honeycombed, slightly smoky tripe spiked with capers, olives, bits of sausage, and fresh oregano — and served on a bed of olive oil-rich polenta.

Paisan’s desserts aren’t especially memorable, but will end the meal on a pleasant enough note. The torta di mandorle (almond tart) wasn’t as creamy and marzipan-y as we might’ve liked, but a dollop of whipped cream lightened it up a bit. The dense, barely sweet ricotta cake featured a nice and chewy bottom layer of crushed pistachios and dried fruit. And the lush house tiramisu featured alternating layers of rum-moist cake and butter-thick cream with a lusty dusting of bitter chocolate on top: an impressive rendition of this overworked classic.

Stephen Singer’s wine list is brief yet well rounded, and the beer list offers a few treasures, but Paisan’s cocktail menu is where the action is. Farmers’ market melons, tomatoes, and citrus peels are crushed, muddled, or set afire and combined with house-made limoncello, single-barrel bourbon, top-shelf grappa, or some other copacetic intoxicant into an impressive array of tipples. Il Vampiro, an especially potent version of a bloody mary, combined more of those Baia Nicchia tomatoes with scallions, orange juice, tequila, and smoked paprika into a smoldering and bittersweet eye-opener that may not be for everyone. But no caveats about the Paradise Found; this light, frothy mixup of summer melon, rum, elderflower liqueur, and prosecco was barely sweet and lingeringly spicy, and the perfume from the sprig of fresh lavender poking above the rim added a distinctly earthy accent to the whole. Try it out on the patio on a pleasant afternoon with a slice of equally imaginative, proudly unreconstructed Left Coast farmers’ market pizza pie.