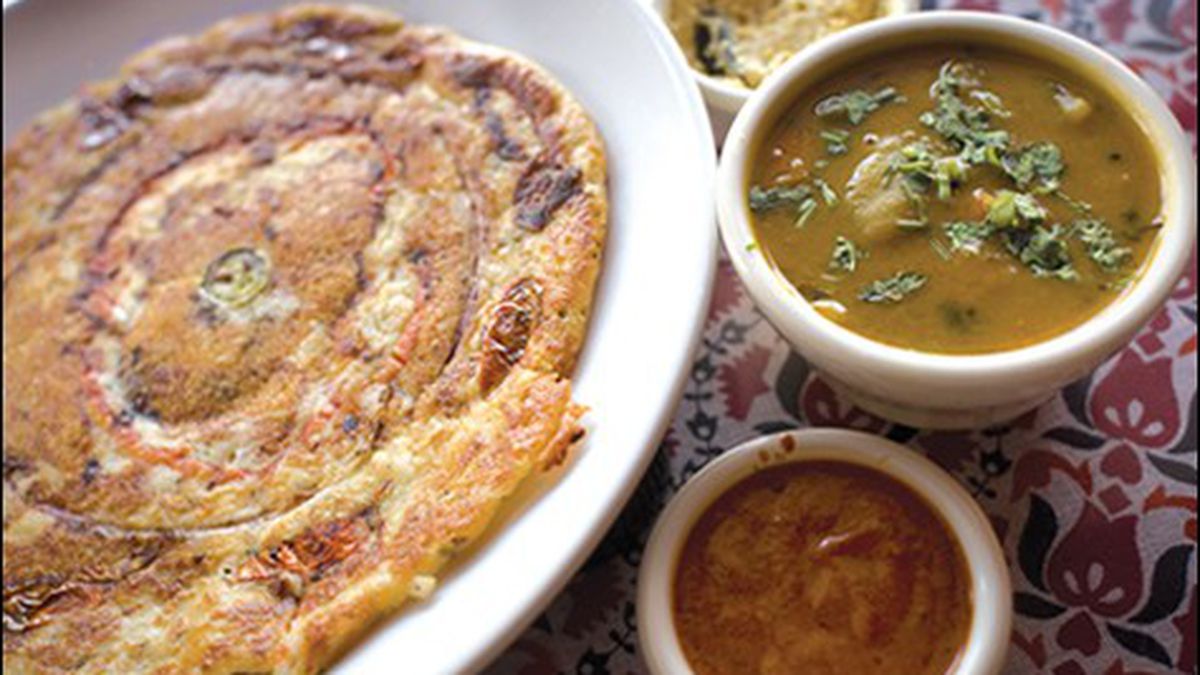 Do you love rice? Really, really love rice to the point of craving it when it’s absent, liking even to eat it plain, revering this life-sustaining, labor-intensive staple that matures submerged like something mythical, like the edible version of pearls?

If you love rice like that, you’ll love chiura, raw rice beaten flat into white flakes whose not-quite-crunchiness lies somewhere between meusli and tortilla chips. Its consummate blandness is the last thing you might associate with Indian food, yet in Nepal it’s a ubiquitous snack. At Hamro Aangan, chiura is served as a side dish, its snowy simplicity complementing complex stick-to-the-ribs entrees such as garlicky khashi ko masu goat curry and velvety, tomatoey, traffic-cone-orange, buttery, bisque-rich paneer tikka masala with cheese cubes the size of casino dice, and appetizers — chaat — ranging from fish pakoras to puffy, pop-between-the-teeth, potato-stuffed puri.

“Nepal is one of the poorest countries in the world, so chiura is popular because it’s a dried food that you can transport easily and eat year in and year out,” said Bishnu Bhandari, who grew up in Kathmandu and opened Hamro Aangan in Albany three months ago, after years spent managing the popular Vik’s Chaat Corner in Berkeley. The restaurant’s name translates to “our courtyard,” because “when people gather in Nepal, the party will be held in a courtyard,” Bhandari beamed.

Sure enough, this homey restaurant, with its colorfully patterned cotton tablecloths and wall-size oil painting depicting Nepal’s lofty peaks, sports a palm-fringed, umbrella-tabled open-air courtyard out back. For the homesick Himalayans and stranded-at-sea-level trekkers among Hamro Aangan’s already loyal league of regulars, the documentaries that Bhandari sometimes screens on one wall stoke high-altitude memories fed by what the menu calls “Indo-Nepalese cuisine.” This includes Indian standards such as vegetable biryani, tandoori chicken, and rosewater-perfumed galub jamun along with hearty, humble, and less capsicum-packingly hot Nepalese favorites.

A tiny pincushion of a country nestled between China and India, Nepal has absorbed culinary influences from two of the world’s most populous nations, oldest civilizations, and justly celebrated cuisines, each of which has spent thousands of years taste-testing and perfecting itself.

This fusion, along with an unforgiving climate and landscape and a Hindu majority, produces a range of dishes that, even when meatless, were clearly devised with survival in mind. Household staple kukhura ko ledo finds huge hanks of firm white chicken stewed in what the menu calls “gravy,” but which is a thick ginger-tomato version of Grandma’s get-well chicken soup.

Looking like twin hackysack balls but revealing themselves to be paradisiacal, pea-punctuated ultra-tater tots, aloo tikki chaat come drenched in a sweetish chickpea sauce that matches their homely magnificence bite by energy-boosting bite. Listed as an appetizer on the menu, it could pretty much serve as a whole meal.

That’s not quite true of the uttappam, a chewy, salty, spotty, sunny-yellow, fermented rice-flour pancake that’s listed as an entrée. Compensating in prettiness and startlingly tangy, lentil-tinged flavor for what it lacks in substance — two might do the trick — it sports a fried-in onion-strip floral design. Two dips augment the uttappam: a scarlet sambar whose capsicum bang sneaks up slowly from behind and a coconut chutney that embodies Indian food’s ancient wisdom: that wildest and outrageously richest of fruits, tamed just enough to become a creamy condiment fit for a god.

Exciting flavors also grace a spicy stewed okra dish whose melty softness invokes further Indian-food wisdom: produce need not be crunchy to be tasty, and long cooking can make it lustrous. That said, some of the okra was overly fibrous — but okra is, after all, a summer crop.

Both vegetarian and chicken momos, Nepal’s satisfyingly thick-skinned version of potstickers, are served here with a generous helping of stewy, mustard-seed-speckled “Aangan sauce.”

Sides include naan bread — surprisingly light and fluffy, given the sturdiness of most other dishes here — and aloo ko acchar, which Bhandari calls “Nepalese potato salad.” Its rough-cut spuds and long, soft, hot peppers loll in a malachite-green pickly mixture thickened with sesame seeds, made spunky-sour with mustard oil.

As is true of so many dishes here, its flavors play tag on the tongue, as if to tease: You recognize me! No, you don’t! The result is refreshing, bracing, remarkably filling — as if Grandma was readying you for a trek.