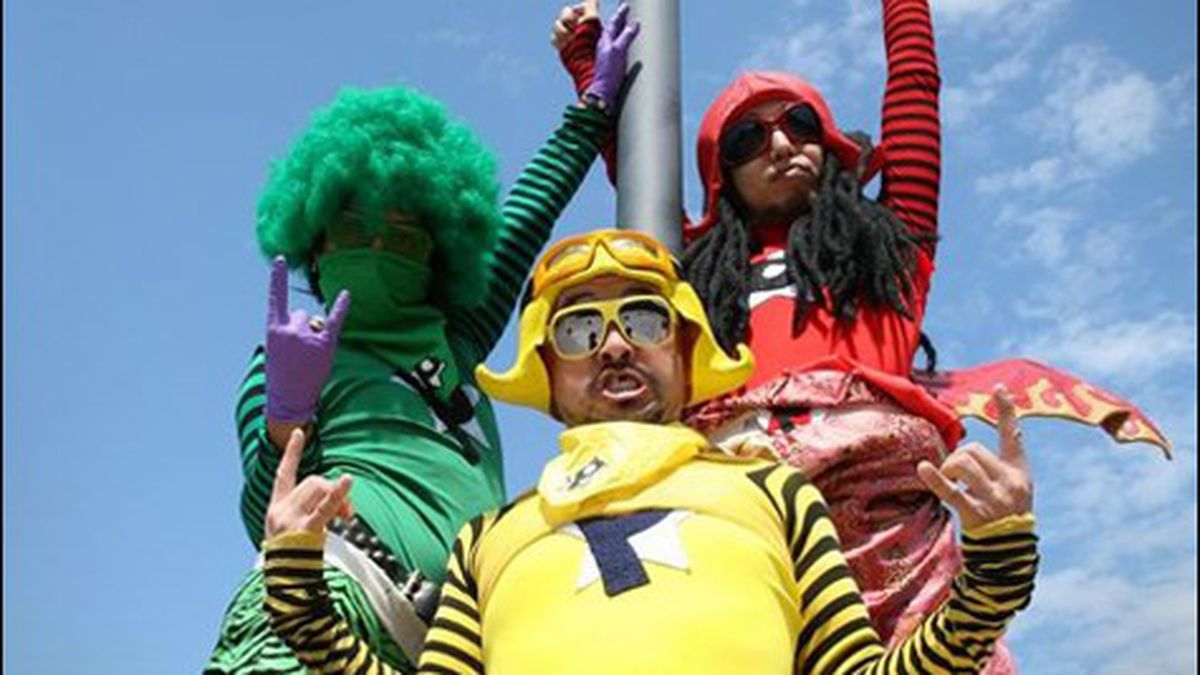 Peelander-Z Touches Down in SF

Never mind the $7 airline cup-size drink. Never mind the crushing electro-pop remix of Nirvana’s “All Apologies” being piped through the DNA Lounge speakers. Never mind, even, Graffiti Monsters, the hardcore opener that ended its set with the frontman putting away his guitar and producing two old Nintendo systems, saying, “this is the dance party” and thrashing along as the drummer accompanied a blood-sport eight-bit symphony. No, because what came next made all the mediocrities and weird one-offs of a Sunday night in SoMa fade completely.

Peelander-Z: maybe the greatest live music spectacle touring the country right now. It’s tempting to think of counterarguments to this claim, but it doesn’t seem likely that even the biggest stadium show could encapsulate the feeling you get from having a guitar player in a Power Rangers suit stand on your outstretched palms while the whole crowd does the limbo.

In real life, they’re Japanese-American musicians who live in Brooklyn, but that’s only obvious if you read the band’s biography. Peelander’s stage show and concept are rooted in fantasy. The band moniker is a goofy action-figure derivation, and the “Z,” it seems, was added on just so the crowd would have something to yell back at them. (Supposedly, they’re from outer space, and they came down in a big intergalactic bowling pin — at least, that’s what they told us during the show.) Really, the whole show is about call and response. Peelander Yellow leads a list of repeat-after-mes that mostly pertain to food and bowling — things that everyone can unequivocally champion. In fact, maybe the term “Power Rangers” is too austere. This band is much weirder than that. They’re more like something in between a Teletubby and the Slim Jim guy.

For the most part, every audience member seemed on the exact same page. If you had never seen Peelander before, it was pretty easy to learn the parts, but most people seemed familiar with the band’s routine already. A crowd so unified under one set of crazy pastel-suited freaks recalls only a few predecessors, The Flaming Lips being one of them.

Indeed, all the fans knew exactly what they were doing, almost at a cult level. The amount of rehearsed audience participation was on par with a screening of Rocky Horror Picture Show or an AC/DC reunion tour, with all the self-reflexive silliness and tradition of a midnight showing of The Room. Except, the crowd wasn’t just buying into ironic in-jokes; it was a straight-up celebration of, well, you know, tacos, glasses, vowels, pizza, and zany indoor sports.

Peelander’s most avid fans were almost as arresting as the group itself. Take, for example, the guy in the neon tank top, who, several times throughout the evening, would release a can of Axe body spray into the crowd and then begin wildly moshing. Then there was the girl in the yellow chicken head-patterned jumpsuit. In an epic climax, these people and others were all invited onto the stage to play any and all of the Peelanders’ instruments, while the group donned giant, full-body bowling-pin suits and “went bowling” in sort of a psychedelic soul-train dance through the middle of the club.

To attempt, perhaps in vain, to explain the actual musical impact of this event: Imagine Andrew W.K. composing for a Japanese children’s show, given a vast amount of time and very little budget. That gets you at least in the ballpark. Peelander Yellow, obviously the band leader, was the opposite of an archetypal aloof rock star. He remained in constant (sometimes indiscernible) dialogue with the audience — with a thick Japanese accent that couldn’t not be at least a little put on. His enthusiasm, though, must be some sort of disease, because he obviously had no control over it.

Then there was Peelander Red, who absolutely shredded on guitar, and the silver one who managed a variety of stage antics — like standing on the hands of the audience while playing, and jumping off the DNA’s balcony onto the stage. Then there was Peelander Pink, who bided her time playing imaginary lines on a Korg and wandering around the crowd, until the end when she closed the show with a Cyndi Lauper cover. Peelander Green was the unsung hero, a machine of a rock drummer, propelling the group through decades of punk, ska, blues, metal, and pop, all with a happy-go-lucky pop veneer. He hit start-stop posts for emphasis nearly every thirty seconds for an hour straight.

It’s a little difficult to tell someone, “Hey, this is probably the best show you’ll see this year, or maybe ever” and not immediately be second-guessed. It’s also baffling that any band with a stage show as extravagant as Peelander-Z could still keep such a low profile. But sometimes you just have to believe in the unbelievable. This is the kind of band you should re-arrange travel plans to see. Drive six hours in the rain and go alone, if you must.