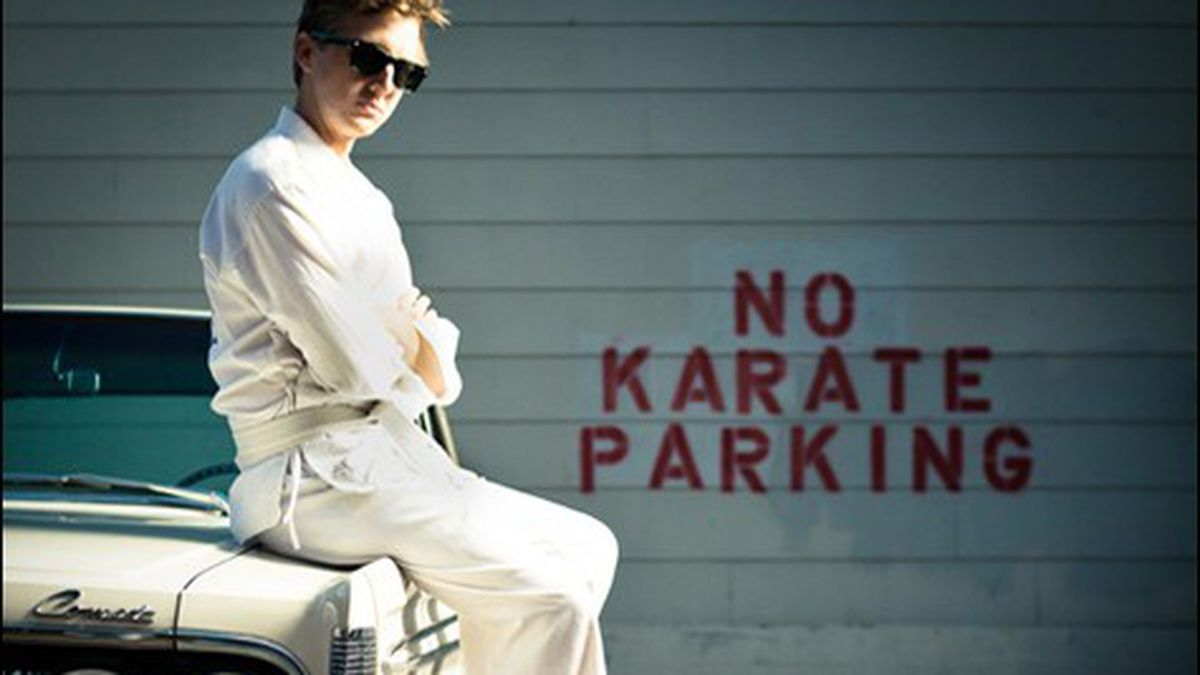 Presented without comment, here are three things Jeremy Sullivan of Parentz actually said within fifteen minutes of sitting down for an interview a couple weeks ago: 1) “When I write music, it’s kind of like organic farming”; 2) “I was really inspired by that 90120 spinoff, The Heights“; and 3) “These bocce balls are all up in my sauce.”

Sullivan is goofy and incessantly talkative and slightly ADD, with a penchant for neon colors, an obsession with pop culture, and a slightly oddball approach to music (not to mention the world at large). It’s often almost impossible to tell whether he’s joking — or, more accurately, he’s always kidding, but it’s a silliness that comes from a deeply earnest place. After all: Organic farming is dependent on a complex set of environmental factors, much like songwriting; The Heights featured the actually-kinda-great theme song “How Do You Talk to an Angel”; and those bocce balls, were, indeed, all up in his sauce, seeing as the interview took place at Make Westing.

Sullivan is funny that way. Look no further than his biggest project to date, a Tom Hanks concept album called Big. At first, it looks like it has to be a joke, or at the very least a terribly literalistic novelty piece. But in actuality, it’s neither — just a surprisingly addictive set of drums-n-synths electro-pop that happens to be centered, mostly abstractly, around Hanks’ illustrious career, and that was founded in a genuine desire to create something new and unique. “A lot of times in my life, when I try to make a really strong artistic statement, someone else has already done it. And then I get discouraged and lose energy and don’t feel that engaged with it,” Sullivan explained. “So with this, I was like, ‘I just want to choose something that’s so specific and weird that there’s no possibility anyone else is doing it.'”

Or take the band’s name itself: According to Sullivan, it’s less a meaningless artifact of hipster irony than a tongue-in-cheek comment on the hypocrisy of pop culture. Seriously: “I feel like there’s this big youth obsession in music, with all these bands singing about the kids, all these bands with kids in their name,” he said. “And nostalgia’s great, nostalgia’s powerful, a lot of the stuff I do is nostalgia-driven — but I also really value the experiences I have as an adult.” In calling the band Parentz, Sullivan was consciously trying to make a contrarian point by employing the most uncool noun he could think of. The “z” at the end was added to make fun of the way marketers purposefully misspell words in an attempt to market to kids.

In both cases, there’s an odd backwardness to it, and that’s something that pervades the whole project. When you think about it, it’s because of an almost-obsessive impulse for originality that Sullivan came up with, well, a Tom Hanks concept album; because of an incisive opinion about contemporary culture that he gave his act one of the most manifestly silly band names to come around in a while; and because of a fierce commitment to artistic integrity that Sullivan ends up coming up with some of his silliest stuff. He’s a serious musician trapped in the body of a total goofball.

And besides, Sullivan’s got the talent to back it up. A UC Berkeley graduate, he started Parentz in July 2011, after quitting his job and amicably breaking away from two earlier musical projects, MakeMe and Chambers. Parentz’ first show, at the Uptown, was about a year ago; this summer, he added Kia Smith as a vocalist. (Though Big was written before she came aboard, the two of them have rearranged several songs to be played live with two sets of vocals.)

By all accounts, Smith was a great addition. Having grown up singing in church choirs and contributing vocals to friends’ projects across the musical spectrum, she’s got the vocal range to keep up with machine-generated melodies, and the strength to keep up with Sullivan’s ambitious arrangements. Seen live, she’s goosebump-inducing.

But even on the album, without Smith, the project’s fairly brilliant — evocative of both contemporary-era chillwave and cheesy Eighties pop, eminently danceable without being unchallenging musically. The title track, “Big,” begins with an earwormy xylophone and spare beat before building up with a rainstorm of bright synths and Sullivan’s mid-range vocals for what he calls, aptly and apparently with complete sincerity, “a case-of-the-Mondays” song. “Back It Up,” meanwhile, is a stream-of-consciousness rap song with a soaring melody, deep bassline, and bouncy rhythm; perhaps unsurprisingly, it’s already spawned its own dance.

Sometime in the future, Sullivan would like to a do a musical retelling of Twin Peaks, complete with a theater-like stage set, so the live show would be something between a concert and a play. But what’s up first is a full-length album incorporating Hanks’ entire filmography. To prepare, Sullivan watched every single Hanks movie and TV show appearance, all the way down to a little-known Happy Days guest spot. (“He went deep,” Smith said. “Not just Bosom Buddies deep, but way deep.”) And as it turns out, Tom Hanks’ oeuvre is a pretty good stand-in for life in general: “It’s Tom Hanks, it’s music, it’s life, it’s growing up and dying, it’s a vehicle for communicating, ” Sullivan said. “But instead of using a guitar, I’m using this guy’s life.”

Which is all part of the idea — like most musicians, all he’s really doing is trying to communicate emotion. It’s just that in his case, he’s not so self-serious that he’s not willing to do it in a weird way. “To me, it’s not important that the music communicate something to pass the time, or something to put on at the club,” he said — though his music would probably feel pretty damn great at a dance party.

“I feel like it’s possible to communicate so much more — music can be a lot more narrative, and when it is, it makes you more thoughtful and engaged and it’s more powerful as an art piece.”

Before He Was Tennessee

A Year to Remember