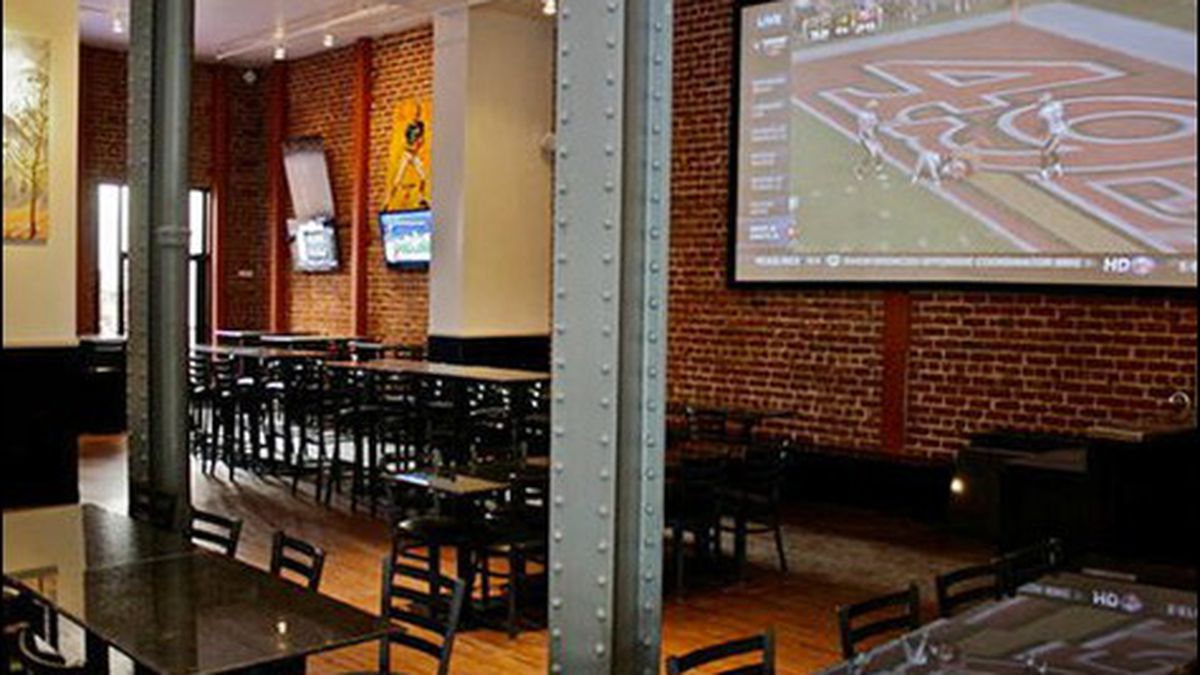 Pappy’s: A Sports Bar with Salads

The first thing you should know about Pappy’s is that it does not carry Buffalo wings. I repeat for emphasis: Pappy’s, a purported sports bar, does not have Buffalo wings. It has something it calls chicken wings ($3.99) — marinated for 48 hours and then smoked over cherrywood, served with either ranch or barbecue sauce, and certainly pretty good for wings of the non-Buffalo variety — but STILL: Pappy’s has no Buffalo wings. (It doesn’t have nachos, either.) What Pappy’s does have: fifteen different sandwiches, including a basil chicken burger ($4.29) and a grilled tofu and avocado sandwich ($5.99); Racer 5 and Lagunitas on tap in addition to Bud and Bud Light; a wide selection of “garden-fresh salads”; a truly lovely little back patio, with picnic tables and fresh herbs growing in planter boxes along the side. But also: lots and lots and lots of televisions, one of which measures a full 205 inches diagonally and takes up the better part of the south wall; the verifiably happiest happy hour in all of Berkeley, with $1 shots and $1.75 Rolling Rock pitchers between 4 and 7 p.m. daily; a nighttime scene that errs on the, ah, convivial side.

Pappy’s is either a college bar that gives an extra fuck or two about its food and beer, or it’s a niceish campus-area casual dining place that has, by virtue of the aforementioned $1.75 pitchers and big televisions, been colonized by college students. As is, it feels like a slightly high-end sports bar, if that’s not a contradiction in terms (spoiler alert: it sort of is). The place is owned by the same people who own Smart Alec’s, next door, which makes a lot of sense, food-wise, and before it opened as Pappy’s earlier this year, it was the beloved, also convivial, Blakes on Telegraph. But Cal inarguably needed a bona-fide sports bar of its own, and Pappy’s is trying — gamely, for better or for worse — to fill that niche: In addition to the televisions, there are Cal jerseys both framed on the walls and un-framed on the staff and tasteful blue and gold accents, and, on game days, lots of yelling people, also in jerseys. (The Cal vs. UCLA game was the bar’s biggest yet, according to its owner, and the staff is expecting an absolute blowout on Saturday for The Big Game.) Even the name is an homage to Cal Athletics — specifically, Pappy Waldorf, head football coach from 1947 to 1956, and, until Jeff Tedford recently surpassed him, proud owner of the most career wins for the Bears. (His picture is up in the bar; he looks like a guy who would be fun to drink with.)

Pappy’s is the kind of place you want to feel like it’s been there forever — wood-paneled, actually-not-euphemistically convivial, steeped in history and decades’ worth of spilled beer. But there’s a creeping sense of equivocation, of existential newness here, one that can’t be overcome by good intentions: Downstairs, in the basement, a highly futuristic-looking digital jukebox advertises its vast selection of “1-hit-wonders!!”; a massive fan about three feet in diameter rests in the corner, blocking the dartboard and presumably gearing up for all the conviviality to come later on. Upstairs, the place is cavernous and light-filled in that generic new-bar/restaurant way, which gives it an unfortunate feeling of emptiness even when there are lots of people around; there are modern touches and brand-new televisions and big windows and salads, for god’s sake. Pappy’s has not been here forever, not even close. Maybe someday it’ll feel that way — time moves quickly at college bars, after all, and besides, you could do a lot worse around here than Racers 5s and new TVs. In the meantime, though, if it’s Buffalo wings you’re looking for, you can find them at Kip’s, just down Durant.