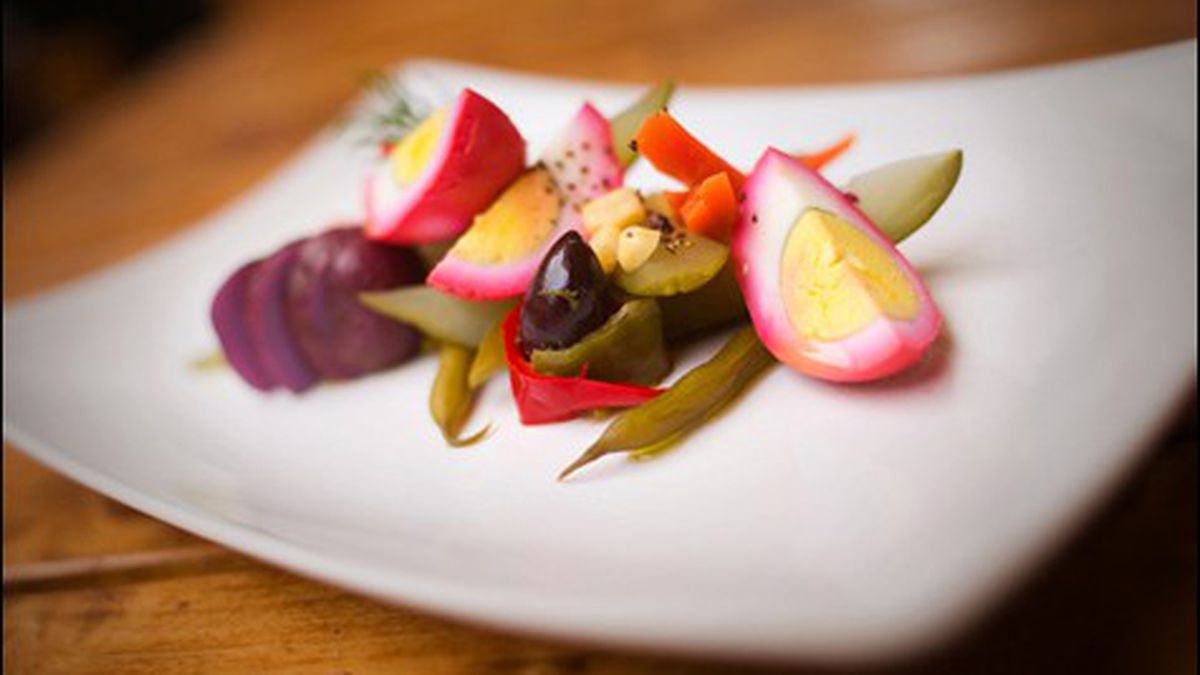 Taking It Slow at Portal

The best thing about Portal, the new restaurant and beer garden a stone’s throw from Oakland’s Lake Merritt, is how casual it is — how it evokes lazy summer evenings spent hanging out on a friend’s backyard deck, nursing cold beers while you snack on plates of munchies. The music is lively (even live on occasion); the abundance of tendrilly, planter-boxed greenery embraces the “garden” element of the beer garden; and the backdrop (with both the lake and a slice of Oakland’s skyline visible in the middle distance) is picturesque.

The worst thing about Portal is how casual it is, such that sometimes the basic niceties of restaurant service get overlooked: On a busy night on the outdoor patio, our (perfectly friendly) server lost track of our party, which meant we didn’t see him again for twenty minutes after he dropped off our menus, and flagging someone down to settle our bill felt like a Herculean task. Meanwhile, we were packed in tight at one of the many big communal picnic tables with heavy benches arranged in such a way that getting in and out of my seat demanded a certain nimbleness — a straddling maneuver that led to clumsily intimate contact with a stranger.

But don’t get me wrong: As long as you’re not in a rush — and enjoy your bar bites light, mostly wholesome, and veggie-centric — there’s a decent chance you’ll like this place.

Portal is a collaboration between Jennifer Tucci (of the Rosamunde Sausage mini-empire) and first-time restaurateur Warren Rector, a construction manager who did the design and build-out himself, together with two of his bartenders and another friend. It’s an impressive space: The dinky black facade is intentionally deceptive, Rector said — meant to make you think the place is some tiny dive. Walk in (through a door with an actual porthole), and there’s a bar with backlit shelves illuminating rows of house-made pickled things — glowing purples and oranges and greens, the overall effect like something you’d find in some hip DIY enthusiast’s man cave. Farther inside, the space opens up onto the aforementioned patio, which is vast and lovely.

Rector said he had intended to open a vegetarian restaurant but eventually decided to include a few meat options as a nod to the time-honored tradition of pairing beer with meat. Those two elements alone — the vegetable-heavy menu and the dozen or so (mostly local) beers on tap at any given time — make Portal worth seeking out, especially if you’re a vegetarian tired of going to bars where, amid the sundry burgers and chicken wings, the only thing you can eat is (maybe) the French fries.

Heading up the food program is chef Eric Evert, who sprinkles the restaurant’s various small-plate and bar-bite offerings with a hodgepodge of international influences. The emphasis is on using locally-sourced and (mostly) organic vegetables, so even when Evert riffs on pub-grub standards, the resulting dishes feel unusually wholesome: There was a homemade fresh pasta dish that varies slightly each day depending on what vegetables are available — ours featured a satisfying combination of sweet butternut squash, red bell pepper, and Grana Padano cheese. There were exemplary Kennebec potato French fries, cut just thickly enough to keep their textural integrity, that were fried in rice bran oil (clean-tasting and healthy) and topped with smoked chili powder and fresh-squeezed lime juice.

Portal’s most popular dish is probably the “garbage bread,” which is basically a stromboli: pizza dough that’s topped with tomato sauce, cheese, and other ingredients, rolled up into a log, and then grilled. Instead of pepperoni or Italian sausages, Portal’s version is filled with fresh vegetables: mushrooms, spinach, and corn the day we ordered it. Served with two dipping sauces (pesto and marinara), it satisfied our cheesy-doughy itch without weighing us down.

Though the food was tasty overall, there were nearly as many misses as hits, even among components of a single dish. As beautiful as Evert’s house-made pickles looked on the wall, the pickle plate felt oddly uninspired — the exception was the crunchy pickled garlic, a revelation both in terms of taste and texture. Mushy, vinegary cauliflower? Not so much. Of the two mini burgers we sampled, the portabella mushroom version (smoky, meaty, surprisingly juicy) was great; the standard beef burger (grilled until dry and gray all the way through) was not. And in an entrée of “dueling salmon,” there was a clear winner and loser: A beautifully seared (if miniscule) fillet served on a sweet corn purée dotted with crispy potato and garlic bits was something I wanted an entire plate of. The raw “kimchi crudo,” on the other hand, lacked the spicy punch and funky depth of flavor I expect from kimchi — it just tasted kind of sour.

Worst of all, an order of sweet potato fries was covered in an unconscionable amount of salt and served with an odd (and also salty) ginger aioli — another example of a vaguely “ethnic” twist that didn’t work.

Like many restaurants that serve small plates, Portal’s pricing is somewhat inconsistent: The pasta, at seven bucks, was a steal. The salads, all priced at $8 for a smallish portion, not so much. If you order carefully, you can cobble together a decently priced dinner, but Portal is mostly a place for grabbing a few snacks to munch on with your beer.

And in spite of the service snafus, there’s no denying that Portal is one of the more pleasant new spots to while away a couple hours. As the sun went down, the little lanterns set up around the beer garden’s perimeter offered a dim yellow glow. With the buzz of comfortable conversation all around, it reminded me again of long nights spent with good friends — around a campfire, say, an intimacy born of one beer too many and the half-darkness through which we could barely make out each other’s faces and the food we were eating.