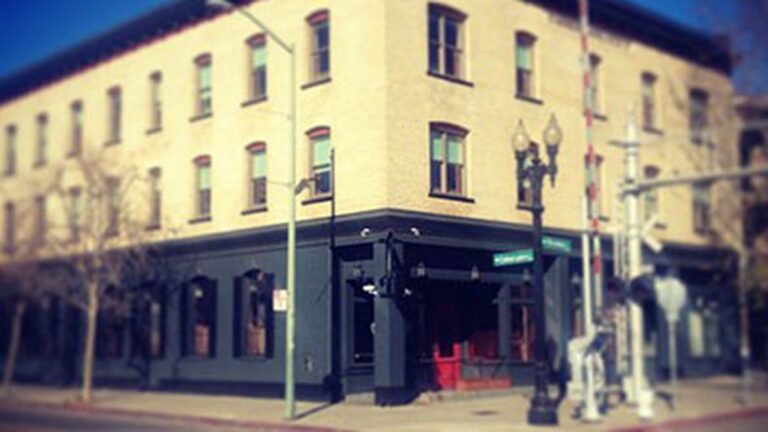 A new bar and restaurant in Oakland’s Jack London district is aiming to become the new home for Bay Area country music fans — and to serve a lot of massive stuffed burgers in the process. Overland (101 Broadway), a 4,000-square-foot restaurant located in the space formerly occupied by Centouno, will feature live music three or four nights a week, no cover charges, and regular country line dancing lessons.

Owner Paul Hayward, a self-described “country boy” from rural Pennsylvania who grew up listening to bluegrass and country music, is no newcomer to this kind of venture. For the past four years, he has organized Twang Honky Tonk, a weekly country music and line dancing event, most recently held at McTeague’s Saloon in San Francisco. When he decided to turn the pop-up into a full-time endeavor, he looked to Oakland and quickly fell in love with the historic building at 101 Broadway, which had once been a saloon called the Overland House — one of Jack London’s favorite hangouts — during the late nineteenth century. The space just looked like a country bar, Hayward said.

Hayward stresses that his desire is to create an authentic country bar, not a prettified, watered-down Bay Area take on country music. “This is not some Coyote Ugly thing,” he said. According to Hayward, there’s a real demand for something like Overland in the Bay Area, where there might not be an established country music “scene,” per se, but where there are a tremendous number of country music fans.

As far as the food is concerned, Overland will specialize in three things. First, and most prominently, there will be outlandish “stuffed” burgers — the patties made from beef ground in-house daily and filled, variously, with mashed potatoes, spinach artichoke dip, and mac ‘n’ cheese.

Other menu items point to Overland’s Southern leanings. The restaurant will serve St. Louis-style pizza, which Hayward describes as having a very crispy, cracker-thin crust. Like any good bar pizza, each pie will be sliced up into little squares for ease of sharing. And Overland will also dabble in barbecue — in pulled pork, mainly, in part because that particular item isn’t on the menu at Everett & Jones around the corner.

On weekends, the menu will focus on Tex-Mex style brunch — breakfast tacos, migas, and such. On Saturdays, the soundtrack for brunch will be live bluegrass music. On Sundays, whatever big sports game is on will likely take center stage.

The restaurant will have a full bar and an emphasis on Bay Area craft beers, with about 24 brews on tap. According to Hayward, the idea is to offer a lot of craft beer without being a craft beer bar, to make great cocktails without being a cocktail bar, and to show a lot of sports without necessarily being seen as a sports bar.

“We’re a country bar,” Hayward said. “And that’s about hospitality and having fun.”

Overland is tentatively slated to open in April.

Every so often I come across a restaurant that I like, but for whatever reason it isn’t a good fit for a full review — maybe the menu is too limited, or the cuisine isn’t distinctive enough to set it apart from other restaurants in the same general category. Still, several of these places wind up in my semi-regular takeout rotation, and, truth be told, they deserve a little more attention.

Here are three newish spots in Oakland that I’ve been frequenting lately:

1) Located in the old Mikado spot, Shogun Japanese Sushi and Grill (3417 Grand Ave.) is your standard all-purpose sushi restaurant — a little heavier on the “crazy rolls” than is my usual preference, but the quality of the fish is pretty good. Of particular note is the $20 chirashi (or “scattered” rice bowl), which is much more generous than other versions that might be priced a few bucks cheaper. Its fish is almost exclusively raw (no skimping out by loading the bowl with cooked items), and it’s one of the only moderately priced chirashi bowls I’ve found in the area that includes such delicacies as raw shrimp, raw scallop, and, for good measure, a huge deep-fried shrimp head.

2) The Uptown Oakland location of Suya African-Caribbean Grill (408 22nd St.) has been open for a little over a year now, and if you haven’t had Afro-Caribbean skewers before, you should check it out — especially if you’re a fan of spicy food. When the place gets busy, the service can be a bit brusque, but I love both the tilapia and chicken skewers with either the suya (West African pepper rub) or jerk seasoning, with the heat dialed up at least to “medium.” Suya also makes a decent Jamaican patty (the Caribbean’s answer to an empanada).

3) PieTisserie (1605 2nd Ave.) is a pie shop, not a restaurant, but a lot of folks still aren’t aware that the former pop-up’s new brick-and-mortar location near Lake Merritt has been open for about a month now. The individual-portion “mini pies” are probably my favorite thing — especially the filled-to-order coconut cream pie — but it’s also worth noting that, on the weekends, PieTisserie serves a mean savory breakfast pie.