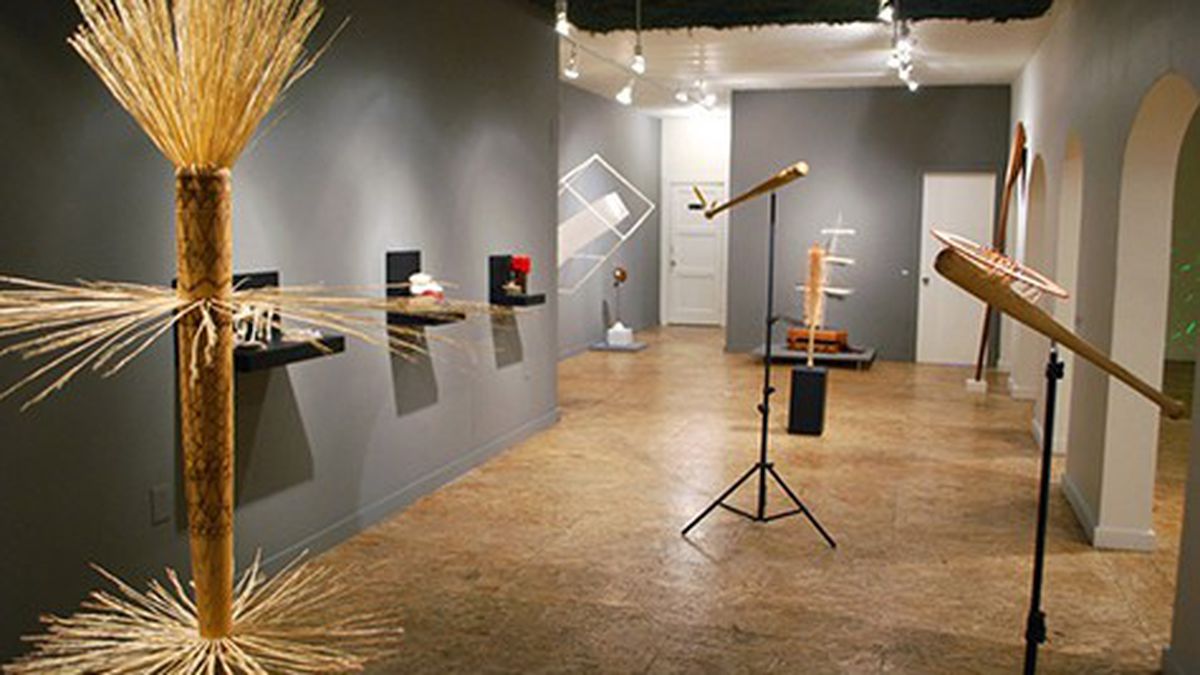 In his current solo show at Johansson Projects, Michael Arcega turns anthropology on its head, and pokes fun at American culture.

In Horace Miner’s 1956 short essay, “Body Ritual Among the Nacirema,” the author details the daily rituals of a mysterious tribe of people named the Nacirema who go through a painstaking, solitary process every day inside of a private “shrine” to prepare their bodies to be presented to the rest of the tribe. Upon reading the first page of the piece, it quickly becomes clear that the “tribe” being described by Miner is actually the population of the United States — if that wasn’t already made obvious by the fact that “Nacirema” is merely “American” spelled backwards.

Rather than a typical anthropological study, Miner’s essay is actually a playful critique of the exoticization embedded in traditional modes of anthropological observation and description, and the extent to which such studies rely on presumptuous leaps. Since Miner’s essay was published, an extensive series of other authors have continued his satirical work with follow-up essays that employ a similarly “othering” lens to describe various aspects of American culture.

Since 2010, San Francisco-based artist Michael Arcega has been contributing to that ongoing study, but through sculpture. His third and latest exhibition on the topic is ESPYLACOPA: a place, currently on view at Johansson Projects (2300 Telegraph Ave., Oakland). In this show, Arcega takes on the role of the anthropologist to present an exhibition of sculptures made up of objects that are meant to exemplify the “Nacireman” obsession with the apocalypse. The show looks like a hybrid between an historical museum exhibition and a typical sculpture show, in which each sculpture is made up of repurposed found objects.

In the cleanly executed piece “Tsaeb Dneirf,” a framed portrait of a little white dog is placed on top of a sheepskin rug, which is then pinned on top of a wooden pallet mounted to the wall. An odd polygon made up of plastic rods protrudes off the palette, with a large blow-up phallus sewn out of a transparent shower curtain poking out from inside it, continuously receiving air from a plugged-in hair dryer. Next to it, four bathroom scales create a platform for a toilet paper stand with brown faux fur wrapped around it.

Arcega first became interested in critiquing constructed notions of culture when he read Miner’s essay in an introductory anthropology class. As a naturalized American citizen who lived in the Philippines until he was ten, Miner’s distanced look at American culture aligned with his experiences assimilating as a child.

But Arcega’s sculptures are not pointed critiques of traditional anthropological methods. They relay an obvious underlying take-away that not everything you read in a textbook should be accepted at face value, and that although customs that seem odd or “primitive” to some may seem normal to others, no one culture may claim that its perspective trumps the rest. That’s a critique that’s been made many times over.

Rather than assembling calculated commentary on aspects of American culture that deserve to be criticized, Arcega’s sculptures are more poetic — more gestural — in the way that they playfully combine seemingly arbitrary American symbols with “Pacific sensibilities,” as Arcega put it. For example, in transforming a number of baseball bats into Nacireman artifacts, Arcega uses brightly colored feathers, traditional Filipino tattoo design, and straw that’s typically used to make distinctly Filipino brooms.

The collection of works will likely disappoint someone expecting to draw a convincing political statement out of the show. And it does feel slightly like the waste of an opportunity to stage a serious discussion about the ways in which notions of cultural identity come to be authored by outsiders when a country is colonized — as was the case in the Philippines when it was taken over by both Spanish and US governments. But the merit of the work lies in its effectiveness in abstracting familiar American symbols and repurposing them for use in an unfamiliar language. In the end, the ways in which Arcega employs that new semiotic toolbox takes on a campy tone. What he’s writing is more of a joke than a critique — and that’s his intention. Miner’s essay comes off the same way, and Arcega said that one of the reasons it spoke to him was because it used “corny” wordplay, which is an appreciated and oft-employed form of humor in contemporary Filipino culture. ESPYLACOPA: a place, overall, is like aesthetic wordplay, and its playfulness is what it should be appreciated for.