Records reveal that the department put officers with histories of using deadly force on the frontlines during Occupy Oakland protests. 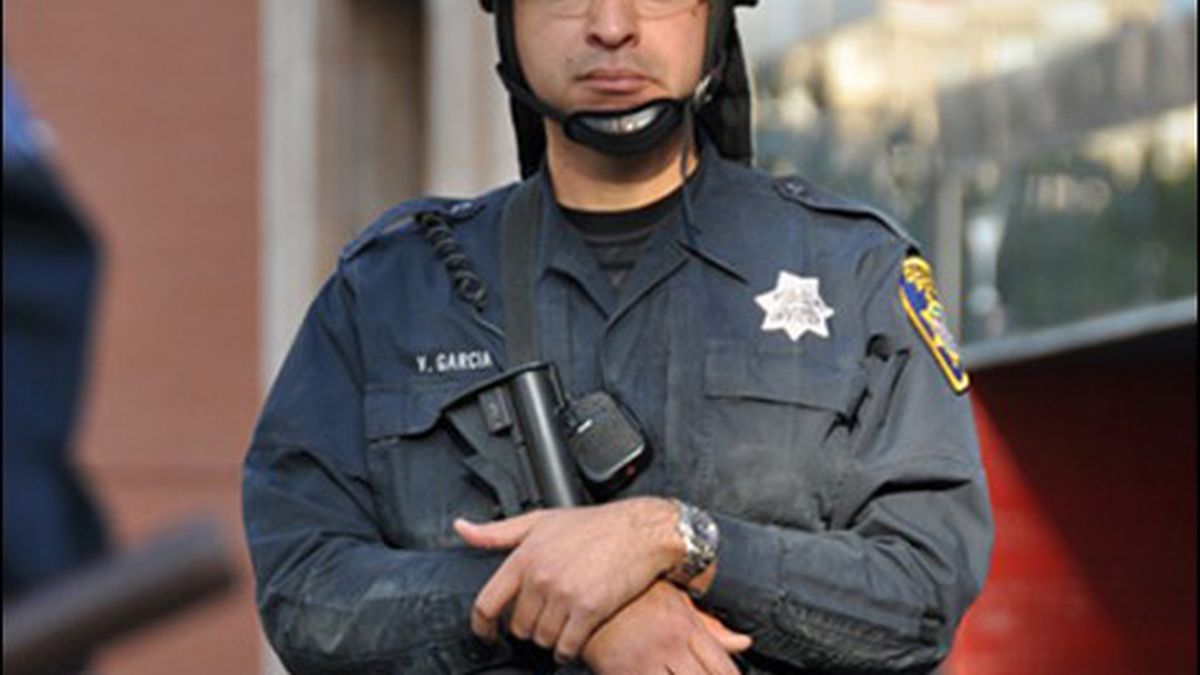 On the morning of November 3, following the massive general strike in Oakland, police shot Occupy protester Scott Campbell with a beanbag round that left an ugly welt on his thigh. Campbell’s only apparent offense was that he had decided to video-record a line of riot police at the north entrance of Frank Ogawa Plaza. Last week, news reports revealed that Oakland police had put two cops on administrative leave and were investigating their roles in the apparent unjustified shooting of Campbell. But the Campbell incident was by no means isolated.

Documents recently released by OPD, coupled with news reports of the Campbell shooting, indicate that the department appears to have systematically assigned cops with histories of using deadly force to deal with Occupy Oakland protests.

Last week, Oakland Tribune reporter Thomas Peele identified Victor Garcia as the officer who fired a less-than-lethal beanbag round at Campbell. And both the Tribune and San Francisco Chronicle reported that the other cop under investigation is Captain Ersie Joyner III, who was Garcia’s commander on the day of the Campbell shooting.

Between them, Garcia and Joyner have been involved in at least seven police shootings, records show. In April 2010, Garcia shot and wounded 32-year-old Bruce Rhodes after the officer said he mistakenly thought Rhodes was reaching into his jacket for a gun. Joyner and another officer are still under investigation for fatally shooting two men in May on Curran Avenue.

Personnel rosters for the deployments on the two most violent confrontations between police and Occupy protesters — October 25 and on the evening of November 2 and the early morning of November 3 — show that Garcia was assigned to one of five so-called “Tango Teams,” the radio code for OPD’s tactical squads of five officers and one sergeant each, which were armed with shotgun-fired less-than-lethal rounds, tear gas, and flash-bang grenades. Among the officers assigned to those squads were five cops named as defendants in the 2003 civil suit filed after OPD fired wooden dowels and birdshot-filled beanbags at anti-war demonstrators during a protest at the Port of Oakland.

According to computerized dispatch logs released by OPD, the Tango squads armed with less-than-lethal projectiles and chemical munitions were posted at 14th and Broadway in front of City Hall on the evening of October 25 and were led by Sergeants Patrick Gonzales and Ronald Holmgren. Gonzales, who has an extensive history of uses of deadly force (see “Deadly Secrets,” 10/12/11), also fired beanbag projectiles from his shotgun during a clash with marchers earlier on the afternoon of the 25th. Holmgren, a former department spokesman under then-chief Wayne Tucker, was named in the original civil suit brought against the group of rogue West Oakland cops known as the Riders, was part of an undercover narcotics bust that resulted in Jerry Amaro dying from wounds caused by a beating from officers, and allegedly instigated a brawl at a 2010 charity boxing event between OPD and prison guards in Sacramento.

Chris Saunders, another officer assigned to a Tango Team run by Sergeant Gonzales’ old partner, Sergeant Chris Sansone, was accused of severely burning two East Oakland women with a flash-bang grenade thrown during a 2008 narcotics raid at a Douglas Avenue residence. The city paid $1.2 million to Nicole White and Patricia Wilson to settle the suit — White suffered burns on 11 percent of her body, spent nearly a month in the hospital, and is permanently disfigured from the grenade.

Eriberto Perez-Angeles, another Tango Team officer who was on Gonzales’ squad on November 3, is a SWAT team member who fatally shot an unarmed Derrick Jones last November with Omar Daza-Quiroz. Perez-Angeles and Daza-Quiroz were also involved in the 2008 fatal shooting of Leslie Allen during a vehicle pursuit.

Garcia’s prior shooting occurred on May 22, 2001, when he shot and wounded Lanare Wise on 88th Avenue after the eighteen-year-old ignored commands to drop a rifle he was carrying. Garcia and another officer came across Wise while responding to reports of a man carrying a weapon; Wise ignored their commands to drop his weapon and Garcia fired when the teenager turned toward the two officers with the long gun in hand.

Less detail is available about Joyner’s previous shootings; the May 2011 shooting on Curran Avenue was his first fatal encounter. Records of OPD shooting incidents from 2000 through 2011 indicate that Joyner fired at Julius Bell in 2001; at Wayne Gordon and Rashad Robinson during separate incidents in 2002; and at Moses Barnett in 2005. All four men survived.

The Curran Avenue incident, which is still under investigation by the Alameda County District Attorney’s Office and OPD’s Internal Affairs Division, occurred after OPD got a tip that a violent crime was about to be committed. Joyner and Officer Caesar Garcia attempted to stop 30-year-old Antoine Jackson, 23-year-old John Sloan, and a third man in the 3000 block of Curran. OPD claims that Jackson and Sloan were fatally shot by Joyner and Caesar Garcia after they stepped out of the car armed. The third man, who remains unidentified, fled into a nearby yard, was wounded by gunfire, and taken into custody. But there are doubts about whether the men were armed when they encountered Joyner and Caesar Garcia. Attorney John Burris, who represents Antoine Jackson’s family, claimed two guns were recovered on a nearby roof but there was no evidence either man was armed.

Both Victor Garcia and Joyner are reportedly being investigated by Internal Affairs in the Campbell shooting for allegedly violating OPD’s crowd-control policy, which states that officers cannot fire less-than-lethal rounds or chemical munitions at a crowd, but “only against a specific individual who is engaging in conduct that poses an immediate threat of loss of life or serious bodily injury.” In Campbell’s video footage of the incident, he can be heard asking police if he is a safe distance from their line, and was not approaching them before being shot by Garcia. In other words, he appeared to pose no immediate threat. Moreover, there is no indication to date that OPD is examining its practice of assigning cops with troubling histories of using force to police mass protests.

According to University of Nebraska-Omaha professor Samuel Walker, a national expert on police accountability, the assignment of officers with documented histories of excessive force to tactical units during mass protests indicates a lack of accountability and oversight in OPD.

“If officers engage in questionable activity, you transfer them out of there,” said Walker. Even though OPD has a computerized system for monitoring officer conduct and policies on how to deal with out-of-line behavior (both a result of court reforms), Walker does not believe they are being used appropriately. “It looked like the court reforms didn’t take,” he said.

Civil rights attorney Jim Chanin, who is litigating Oakland’s federal oversight stemming from the Riders case, believes there needs to be more of a focus on the command staff’s decisions to order uses of force. “In Oakland, the supervisors are never held accountable,” Chanin said. The outcome of Joyner’s disciplinary case, Chanin believes, could send a strong message to the rest of the department.

What is certain is that the crowd control policing will have an impact on whether US District Court Judge Thelton Henderson decides to place OPD under federal control next month for almost nine years of stalled reform efforts. For his part, Walker believes court oversight has not proved sufficient.

“The evidence may be in order for a federal master, for Judge Henderson to break new ground,” Walker said.