.One of the Best Greasy-Spoon Breakfasts Is Served Under an Overpass in Albany

At Jodie's, the hash browns are crispy, the grits are creamy, and the banter is thick and plentiful. 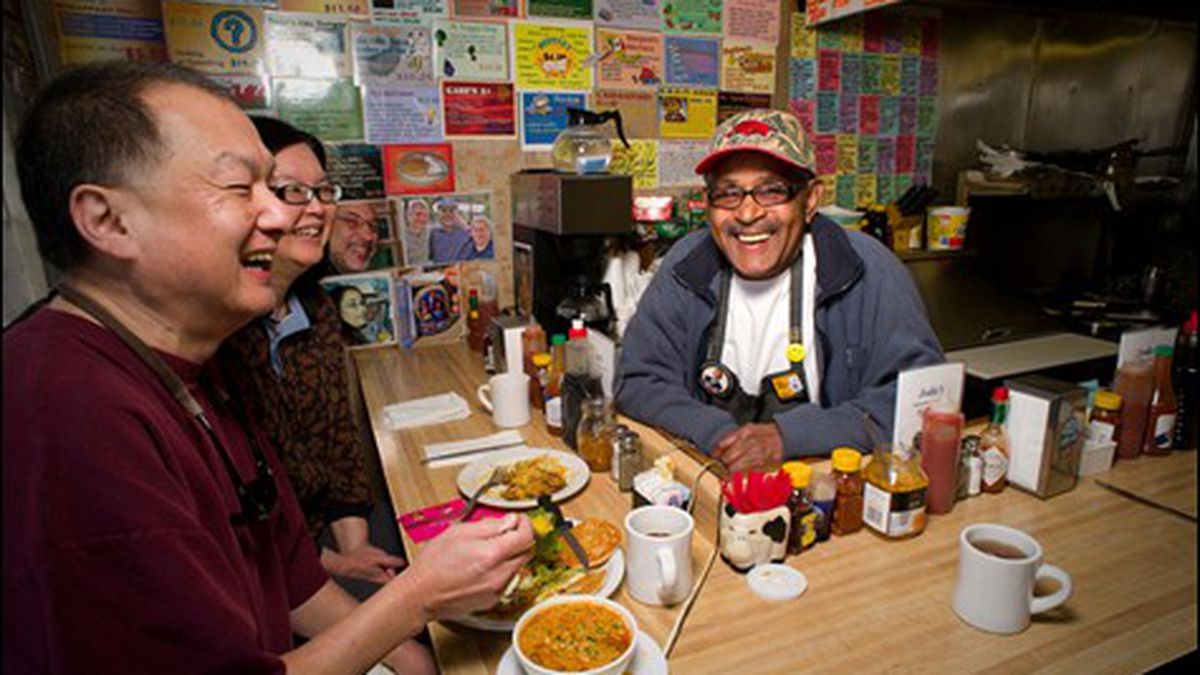 At Jodie’s, a tiny cubbyhole of a breakfast-and-lunch spot, you can count on these truths: The hash browns will be crispy, the grits creamy, and the banter — as dished out by owner Jodie Royston and his crew of faithful regulars — thick and plentiful.

Tucked under a BART overpass on a quiet side street in Albany, the restaurant is so small it’s easy to miss — just a six-stool counter and a plastic table or two outside if the weather’s nice. But despite its unassuming appearance, Jodie’s serves one of the best greasy-spoon-style American breakfasts you’ll ever have the pleasure of eating.

Royston (grin-prone, bespectacled, still spry in his seventies) has been manning the griddle for 24 years. Though his grandson, Charles Garrison, now does much of the cooking, it’s Royston’s place through and through.

The interior is all kitschy clutter — an ancient-looking cash register, cutout photos of regular customers, postcards, and faded newspaper clippings. On a whiteboard behind the counter, Royston has written one of his countless mottoes and catchphrases: “It’s Better to Serve One Person Ten Times Than to Serve Ten Persons Once.” Another one Royston says to every first-time customer: “You crossed the threshold. You belong here now.” Then he’ll hand you a menu, nod toward the vast specials board, and say, like he always does, “What’s in here isn’t up there, and what’s up there isn’t in here. But just tell me what you want.”

If that sounds like a lot of shtick, well, I suspect Royston goes through the whole routine a thousand times a year. But the sentiment is sincere: Jodie’s really is the kind of friendly neighborhood diner you see in every family drama that’s ever aired on The WB — a place where the local color (mostly, but not exclusively, older folks) can hang around for several hours on a Saturday morning, just shooting the breeze. If you sit outside, it’s likely Royston will send another customer out at least once or twice, to refill your coffee or pass you some napkins. It’s just that kind of place.

As far as those specials are concerned, the list is a thing to behold: an entire wall of the restaurant covered with colorful laminated placards, each with a description of a dish and maybe a funny little cartoon. Some of the dishes have goofy names (e.g., the “I Don’t Know,” which is a big sampler platter); many of them started out as special requests made by specific customers — so there’s the “Gabe’s A+,” “Hal’s Bar-B-Que Omelet,” and so forth. All told, there are at least sixty named specials, but Royston said he has more than a hundred different dishes in his repertoire, all riffs on traditional American breakfast fare.

The pleasures of the American breakfast are simple but profound, and at Jodie’s you can check them off one by one — eggs poached or scrambled just so, crisp potatoes, coffee that’s hot and brewed strong, and the most perfectly toasted English muffins I’ve ever encountered: grilled until crunchy and golden-brown. (These were a great vehicle for homemade marmalade, which came in a suspiciously old-looking plastic tub but was well worth the risk.)

I couldn’t resist ordering the punnily named “Nothing,” which you can get with an optional side of “Something” (scrambled eggs, natch). The “Nothing” turned out to be a Cajun-inspired vegetable sauté with Andouille-like chicken sausage. All this came over a bed of hash browns, made from the same frozen potatoes you’d buy at the supermarket, but fried crispy — unlike the soggy specimens you find at so many greasy-spoon wannabes. This is hearty, intensely savory breakfast fare; leftovers are almost inevitable.

During a subsequent visit I ordered the Eggs Royston, a variation on Eggs Benedict: runny poached eggs, grilled tomatoes, your choice of bacon or ham, the aforementioned English muffins, and — the best part — an extra-tangy, lemon-spiked herb sauce that Royston uses instead of a traditional Hollandaise. A generous dusting of a custom red pepper blend, which Royston grinds in house, added a welcome bit of heat.

Because Royston hails from Arkansas, there are plenty of nods to the South on the menu. Grits are available Friday through Sunday, and they alone are worth the price of admission: thick and creamy, served with a slice of plain-old American cheese that you blend in yourself. I wondered about that choice of cheese until I tasted the combination — savory, oozy, and delicious. It’s a knack Royston has, taking the humblest ingredients and preparing them in a way that makes them great.

A side of grits comes with the huge Weekend Special Omelet — packed with broccoli spears and tender pulled pork, the whole thing is griddled (so the juices are sealed inside) and topped with an oniony slurry of a tomato salsa. All in all, a welcome departure from your standard diner omelet.

If you have kids, the Meanie Weenie (two pancakes with a side of bacon or sausage) is worth ordering, especially if your lil’ one is willing to share her pancakes, which are as fluffy and buttery a version as you’d ever want. Royston says they’re made with “buttermilk and tender loving care,” and, well, Jodie’s is the kind of place where you take him at his word.

As wonderful as all the breakfast specials were, longtime customers still mourn the loss of Royston’s most legendary dish of all: his fried chicken, which was put on hiatus a little over a year ago after a health department official discovered he was prepping the meat at home — there just isn’t any room to do it at the restaurant. Royston says he’s on the lookout for a new location — one with space for a prep kitchen, but not so big that the restaurant will lose the homey charm that has won over so many repeat customers.

“You belong here now,” Royston insisted as I headed out after my own first glorious visit. “Don’t say ‘bye.’ Say ‘see ya.'”

And so I did. Anyway, what Royston said was true: As I walked back to my car, I was already thinking ahead to what I would order for breakfast next week, and then the week after that.