.A Bit of Vegas in Uptown

Neon hues, LED lights, and electronica make Camber a bit of a novelty. The drinks and food, however, fit right in. 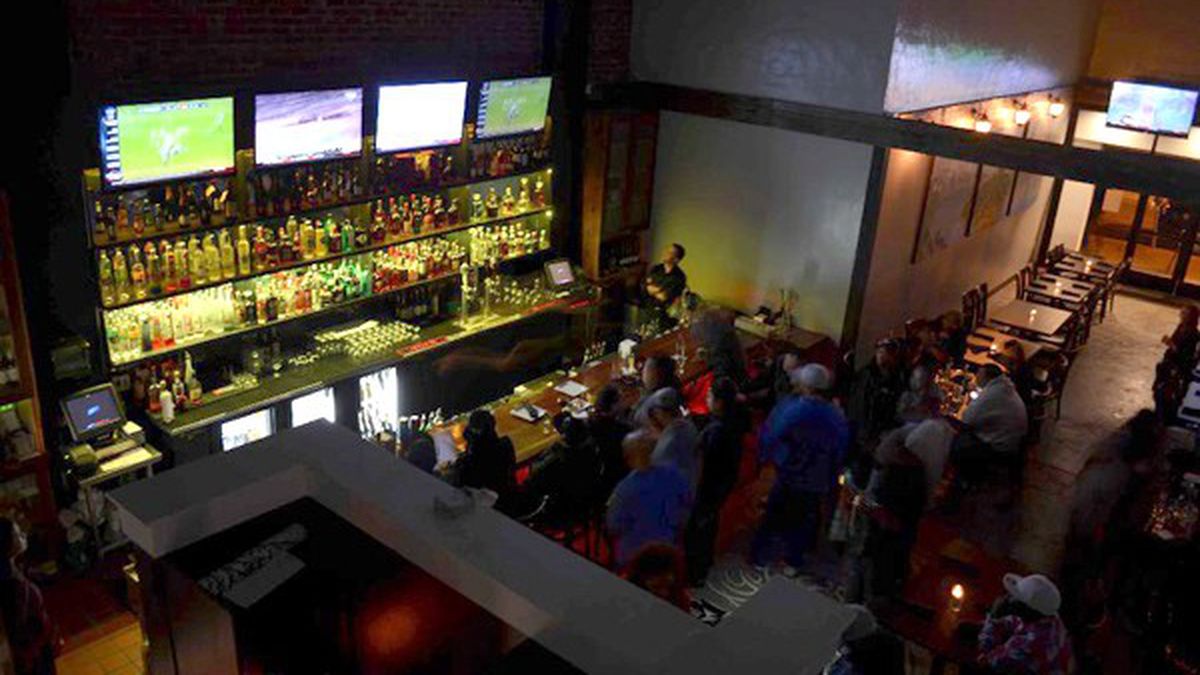 The Red Bull is a curiosity. It is — or rather they, a dozen or two slender, shiny cans are — lined up inside a glowing box on Camber’s bar, right under an equally orderly collection of identically frosted vodka bottles and a set of neon twinkling lights; the effect is somewhere between that of a beacon and an especially futuristic-looking toaster. The effect, in case it is not yet patently clear, is weird — especially here, in the far end of a well-appointed tapas restaurant on 17th Street and Broadway in Uptown Oakland.

This is the owner’s first bar and, according to him, Camber — which opened a bit more than a month ago — is, simultaneously, a sports bar, an “Asian tapas” restaurant, and a lounge. (Its name, by the way, is another hybrid, a portmanteau of his kids’ names, Cameron and Amber).

If you’ve ever been to BEC’s, in downtown Berkeley, it’s sort of like that, but more pleasant: Part niceish restaurant, part neon-hued lounge, and little in between. When you first walk in, it’s all cool blues, candle-topped tables, and large-scale paintings of Oakland. Depending on the time of day, you might see a business-y-looking group of guys or an older couple sharing big plates of egg rolls or pad se ew. But back near the bar, you will be greeted by a floor painting in the style of what can only be described as “stoner art”; to the right, against the wall, the aforementioned centipede of twinkling LED lights changes colors, turning the display of bottles lime, cobalt, lavender, fuchsia. The bar itself is adorned with a pile of what appears to be balls of yarn, except they are hollow and made of straw. They’ve hired DJs for the weekends — mostly house and electronica, the owner said. Last Thursday, the DJ in question had a business card that he distributed unbidden and on which he declared among his musical inspirations “beautiful women.” There’s a lofted little space above the rest of the bar with faux-leather couches and, on both levels, lots of televisions. “I feel a little bit like I’m in Vegas,” my drinking companion told me, the implication being: not Uptown.

But then again: A mango mojito (rum, mango purée, mint, syrup, soda, $10) that could have gone truly, terribly wrong emerges from behind the bar spicy and surprisingly light and not at all too sweet; the jalapeño-basil gimlet (vodka, basil, lime, syrup, jalapeño, also $10) is grassily delicious; an order of could-be-microwaved Indian flatbread and curry dip comes out of the kitchen looking and tasting like not only real food, but good real food; a pair of ah, unnamed, patrons who order a plate of beef larb dumbly, hubristically hot and find themselves tearing up and gasping for breath and generally making a bit of a scene on a Thursday night are met with plenty of no-questions-asked water refills, a plate of free cucumbers and lettuce, and much, much less derision than deserved. The Red Bull toaster, however, remains weird.