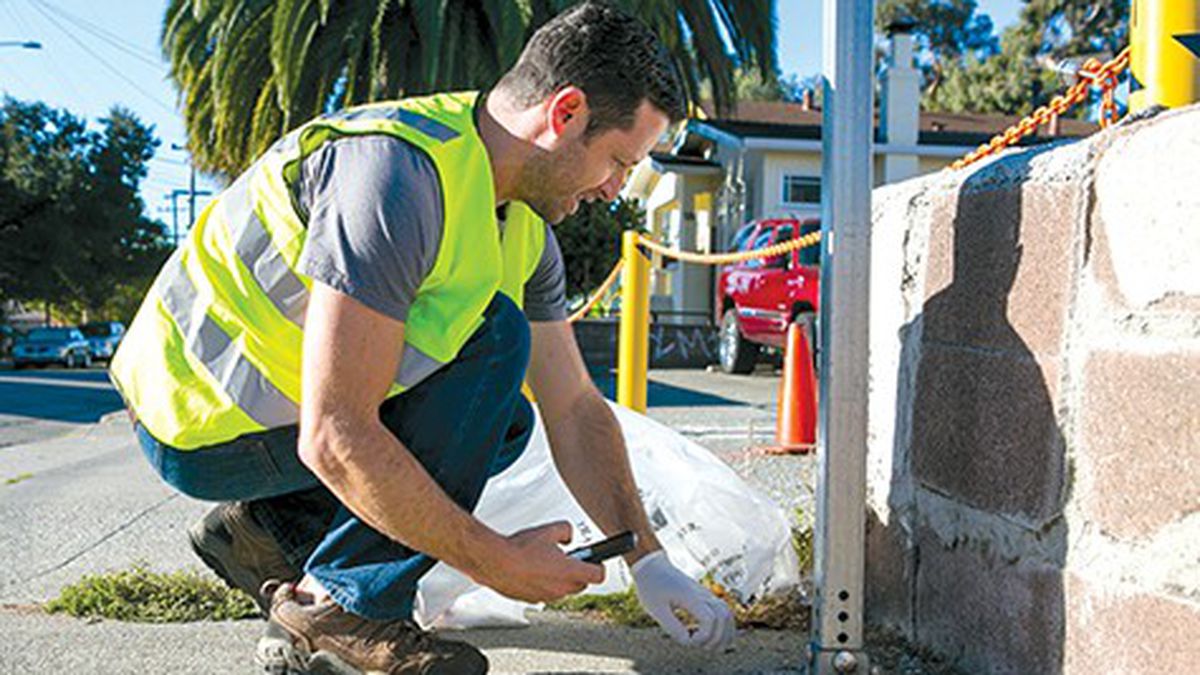 Jeff Kirschner of Litterati is harnessing the power of social media and helping to clean up our environment, one piece of litter at a time.

Oaklander Jeff Kirschner was walking with his two children in the Oakland Hills not too long ago when his daughter noticed that someone had thrown a tub of cat litter into a creek, and said, “Daddy, that doesn’t go there.” For Kirschner, it was an eye-opening moment, and led him to create Litterati, a grassroots movement that harnesses social media and civic engagement to tackle the ever-increasing trash problems that plague our cities and natural spaces.

The idea behind Litterati is a simple yet powerful one. Find a piece of litter, take a photo of it, and post it to Instagram with the hashtag #litterati. Then throw away, recycle, or compost the litter.

The result is a digital, quantifiable archive that, as of now, houses almost 100,000 photographs of trash. A banana peel on a sidewalk in Boston, a pizza wrapper on a street in São Paulo, Brazil, and lots and lots of cigarette butts all over the world (See the Express’ feature, “A New War on Smoking,” 11/12/14 for more on that problem).

Not only does Litterati keep a record of what trash items are prevalent — plastic and cigarette butts are the most egregious offenders, with Marlboro, Starbucks, and McDonalds being the most-tossed brands — but it also documents where that trash was thrown, creating an easy-to-track map that can be used to help correct the problem, such as by using that date to alert city officials to put more trashcans or recycling bins in those areas.

Kirschner’s aim is not to place blame on any person, community, or business, but rather, he hopes to enact real change by approaching trash in a quantifiable, mappable, and shareable way. With Litterati, Kirschner hopes to raise awareness of the immensity of the problem, and work with municipalities and businesses whose products find their way onto our streets, playgrounds, and streams. As the website puts it, “With geo-tagging, we’re able to provide insight into problem areas and highlight the most active Litterati communities. Keyword tags on the photos help identify those brands and products that generate the most litter. We’ll use this to work with companies and organizations to find environmentally friendly and sustainable solutions.”

Kirschner said he has already partnered with many cities, organizations, and brands, including Whole Foods, which “ran an Earth Day campaign that offered a free cup of coffee for a Litterati post,” he said. Other partnerships have come by way of the Natural Resources Defense Council, which “has run Litterati campaigns to create awareness around plastic bags.”

On an even more basic level, Litterati aims to connect like-minded individuals who care about the environment, but also find the idea of cleaning up the entire planet to be a behemoth of a task. Using the image-based social media site Instagram — with its three hundred million users — has helped to establish a global, digital community that’s working together to affect that change. Kirschner said that when he first started, “the only thing I knew was that Litterati was changing my own perspective about the environment. … I had no idea that a single photograph would transform into a worldwide community of people all contributing towards the same greater good.”

According to Litterati’s data, Kirschner said the “trashiest” East bay locales, or at least the areas that have received the most input from Litterati users, are in downtown Oakland, Lake Merritt, and the Dimond District.

It’s amazing that something as small as a gum wrapper has had such a big impact: Litterati now boasts thousands of users in more than forty countries, and continues to grow. Perhaps unsurprisingly, because Litterati started in the East Bay, a lot of trash has been documented here — about 27,000 pieces, according to my calculations, based on the Litterati map. California on the whole boasts 51,000 pieces of litter, the highest of the participating states in the US, which runs somewhat counterintuitively to the notion of the Bay Area, and California in general, as an eco-conscious, environmentally friendly place.

“Undoubtedly, there are many people in the Bay Area who are conscious about the environment. Our actions speak for themselves,” said Kirschner. “Whether it’s creating an infrastructure to support residential composting, leading the way on plastic bag bans, or encouraging environmental education within our schools, the Bay Area consistently leads by example.”

“That said,” he continued, “big challenges stand in our way, and clearly, litter is one of the most problematic.”

The Rise in Tattoo Removal

The Port of Oakland’s Fight For Living Wages