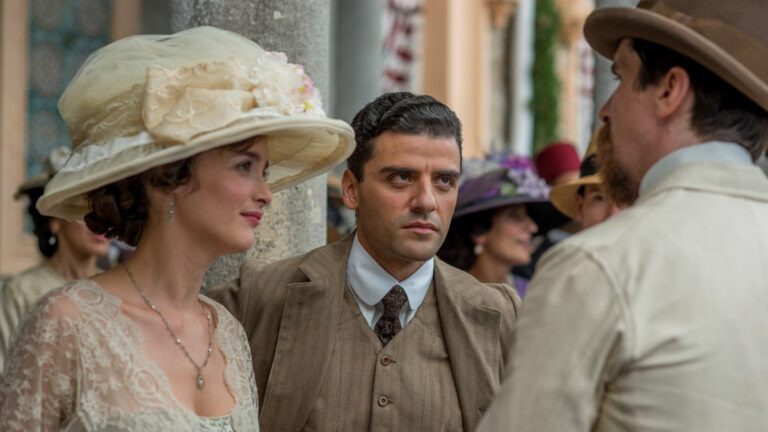 Charlotte Le Bon, Oscar Isaac, and Christian Bale have no time for romance in The Promise.

In its chronicle of three people caught up in Turkey’s 1914 genocidal persecution of its Armenian residents, The Promise makes up for in straightforwardness what it lacks in mystery and irony. Nothing very mysterious about what happens to Armenian-Turkish student Mikael Boghosian (Oscar Isaac) when he reports to medical school in Istanbul just as World War I is breaking out – he and his entire community are scapegoated by the Ottoman government for alleged espionage, and soon all Armenians in Turkey are brutally rounded up for slavery or outright annihilation. Before it’s over, more than 1.5 million men, women, and children are systematically slaughtered.

Needless to say, this impacts the idealistic Mikael’s relationship with his best friends, Armenian-French nurse Ana Khesarian (Charlotte Le Bon) and American newspaper reporter Chris Myers (Christian Bale). As laid out by its writer-director — Northern Ireland native Terry George (In the Name of the Father; The Boxer; Hotel Rwanda), working with Robin Swicord — the movie falls into most of the traps inherent in portraying, say, a love triangle “against the background of” something as horrendous as the Armenian Genocide. But that background is so overwhelming that everything else onscreen automatically takes second place. Scenes of the massacres are appropriately grisly and disheartening.

Actors Isaac and Le Bon aren’t given much room to do anything but be unfairly victimized amid the general savagery. Bale’s character Chris Myers, however, appears to be the Middle Eastern Front equivalent of reporter John Reed, of Ten Days that Shook the World fame – he’s everywhere at once, bearing witness. Audiences searching for ambiguity are in for a disappointment. The Promise hits hard and never lets up.