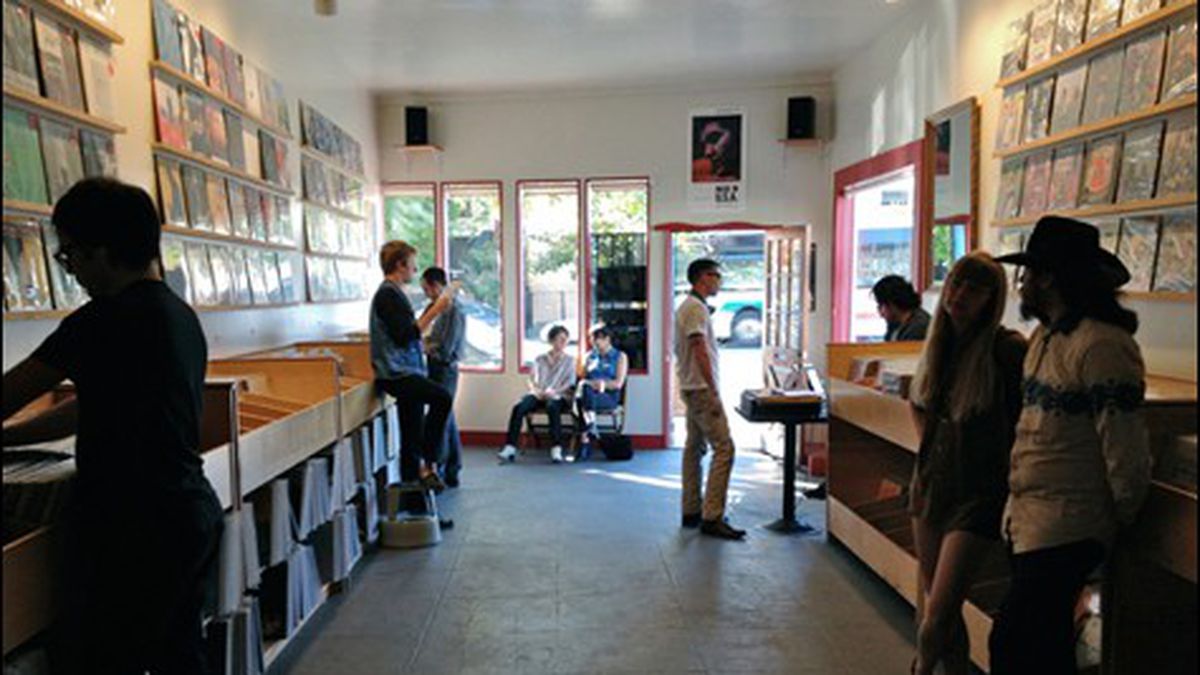 Steve Viaduct opened Stranded with the curatorial discretion of an art gallery. The walls of Oakland’s newest record store are adorned with black and white photographs of Bay Area bands mounted beneath effective lighting, the floor plan is spacious and intuitive, and the cover of the album currently playing rests on its own display. It reflects the attention to detail that Viaduct has honed for the last year with his record label, Superior Viaduct, which finds its first physical headquarters in Stranded. From behind the counter, Viaduct gestured to a display of LPs from his label’s reissues and archival compilations — all early Bay Area punk bands such as Black Humor, Noh Mercy, Factrix, and Monte Cazzazza — but then he brandished his label’s most recent reissue, the Sleepers’ Painless Nights, out December 11.

“[The Sleepers’] sound separates them from everyone else,” said Viaduct. As he elaborated on the Sleepers’ role in San Francisco’s early punk scene, he explained that while the band was pivotal in the scene revolving around the legendary nightclub Mabuhay Gardens, it hasn’t retained the notoriety of its contemporaries, such as The Dead Kennedys or Flipper. Despite being unique for producing a full-length when singles were far more common, the Sleepers fell into obscurity for a number of reasons that Superior Viaduct seeks to rectify with its reissue. Like most artists championed by Superior Viaduct, the Sleepers defy rigid stylistic categorization. “I think they are authentically punk but to put them in that category is misleading,” Viaduct continued.

The new year also will bring Superior Viaduct’s first non-Bay Area reissues with Eighties LA-based post-punk band 100 Flowers slated for a January release and NYC’s Suicide founder Martin Rev’s first solo album, making its vinyl debut. All previous releases revolved around the Bay Area’s early punk period of 1978-1984, in which Viaduct has made himself a bit of an expert, having not lived here at that time. He began compiling information and seeking recordings of Bay Area punk as a hobby, with a casual plan to produce a documentary or book. “For years I had been doing this research on Bay Area bands, even terrible ones,” said Viaduct. “I didn’t care. I would still try to learn everything about them.”

Viaduct would often discover unknown band names in the yellowing pages of old fanzines and seek out recordings. With an enormous cache of information and records amassed, Viaduct realized that a single book or film wouldn’t be comprehensive enough and that most of the music wasn’t readily available, and there came the impetus to start an archival record label to serve lost Bay Area bands.

Superior Viaduct’s first release, Love God-Love One Another, is a reissue of the sole album from a little-known duo of San Francisco experimentalists, Black Humor, originally put out in 1982. With astoundingly esoteric instrumentation, twisted lyrics, and album art that involves swastikas, the nearly forgotten outfit might not seem like a sound investment. Yet, despite being banned in Germany, the initial pressing of 500 LPs quickly sold out and subsequent pressings remain in print. That controversial record set the tone for Superior Viaduct’s commitment to even the most challenging subjects within its historical scope.

Following Love God, Superior Viaduct released an archival collection from Noh Mercy, a female drum and vocal duo that hardly played outside of its San Francisco neighborhood during its short incarnation in the late Seventies. Prior to the Superior Viaduct release, only two songs appeared on a now-collectible European compilation, but Viaduct located enough unreleased recordings to create a compelling full-length. To celebrate the release, Viaduct even cajoled Noh Mercy into re-forming for a sole performance.

Superior Viaduct primarily releases on vinyl, and while the financial prospects of releasing the work of painfully obscure artists on a format considered by most to be outdated might seem grim, but the record label’s swift ascent suggests the contrary. “There’s a demand for some kind of physical artifact,” said Viaduct. “With the death of CDs that’s happening, consumers are looking for a good format to appreciate music. The superior sound, artwork and packaging — people are willing to pay a premium for that.”

Initial pressings of Black Humor’s album and singles by The Avengers quickly sold out, while other releases enjoy consistent sales abroad and domestically. Viaduct recalled recently discovering his Noh Mercy release displayed on a wall in a Parisian record store. To his amazement, the shop’s employee was already familiar with and fond of the album. Revolver, an independent distribution company based in San Francisco, recently invited Superior Viaduct to become one of few labels distributed exclusively through it, and local independent record store chain Amoeba Music will carry the Sleepers’ Painless Nights.

Dealing primarily in new and used vinyl, Stranded is a brick- and-mortar representation of the niche market that allows labels like Superior Viaduct to thrive. The label’s reissue-based business model might seem counter-intuitive, but Viaduct points out that Stranded’s selection reveals that there are countless other labels with a similar aesthetic. Even labels that typically focus on releasing the work of new artists are beginning to incorporate reissues into their catalogues. For example, local punk label Alternative Tentacles recently reissued albums from The Dicks, Voivod, and Kylesa, which have been some of its best-selling releases of 2012.

Besides financial prosperity and the practicality of a remote label headquarters, opening Stranded has facilitated the kind of human interaction that make so many of Superior Viaduct’s releases possible. Viaduct resolutely proclaims that releases like the Sleepers’ Painless Nights wouldn’t be possible without face-to-face interaction with those who remember the band.

The Sleepers’ guitarist Michael Belfer said he was excited to learn about the Painless Nights reissue and Viaduct making an effort to the renew interest in his former group. “[Our story] has all of the good elements of a tale of rock ‘n’ roll debauchery: sex with suicidal strippers, biker gang wars, meth labs [and] incursions with Brian Eno. … We will see if it ever gets written,” said Belfer. “In the meantime, I’m very grateful that people are still interested in our recordings.” &#8;

Rapper Elujay Is Making Protest Songs for a New Generation

Adding Chiles to the Melting Pot