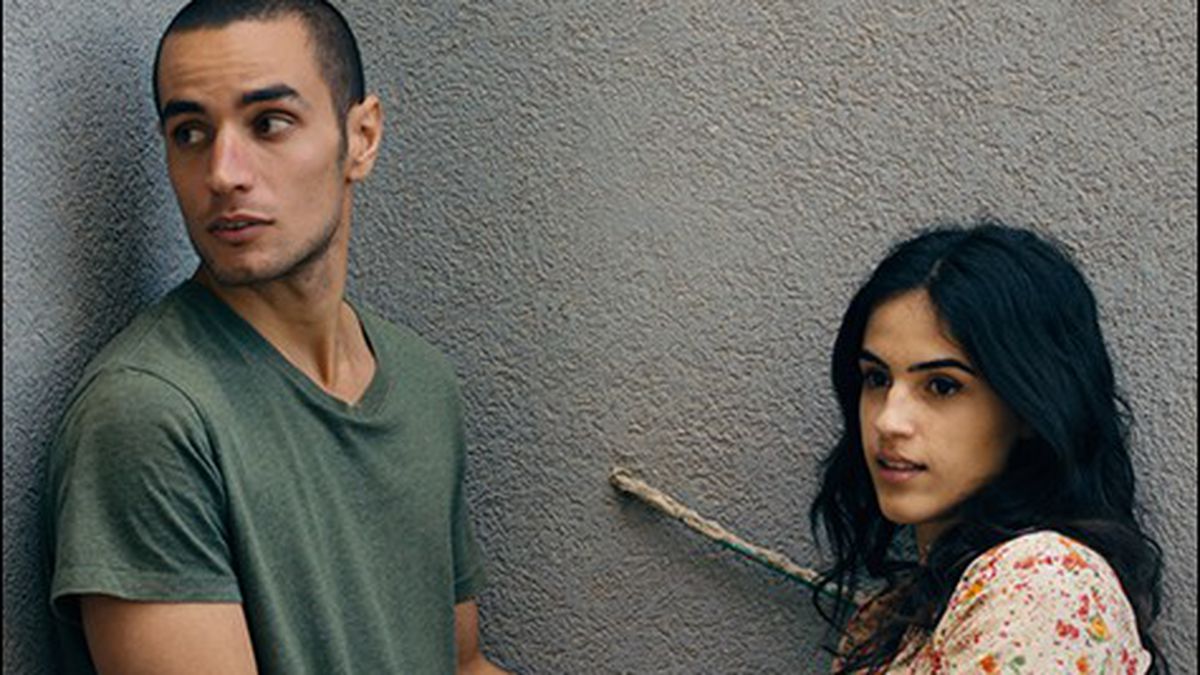 To be young, conflicted, and Palestinian.

So this is what it’s like to be a young Palestinian in the occupied West Bank. Omar (played by actor Adam Bakri), the protagonist of Hany Abu-Assad’s remarkable drama of the same name, flirts with death and humiliation every time he leaves his house. In the opening scene, he scales the Isolation Wall — aka the Israeli West Bank Barrier, aka the Anti-Terrorist Fence, aka the Racial Segregation Wall, depending on whom you ask — to visit his girlfriend Nadia (Leem Lubany) at the factory where she works. As he reaches the top someone takes a potshot at him. Nevertheless, he continues to go over the wall every day. He spends a lot of time skittering across rooftops and shinnying down drainpipes. It’s an ordinary part of his life.

Omar makes his living baking bread, but has an extra-curricular thing going on with his two buddies Tarek (Eyad Hourani), who happens to be Nadia’s brother, and Amjad (Samer Bisharat). They want to shoot an Israeli soldier. Exactly why they want to kill the Israeli is left to us to figure out, but anyone who has been paying attention to news coming out of the occupied territories in the past few years might have a clue.

Maybe it’s the way Omar can be rousted walking down the street anytime, anywhere, and forced, for instance, to stand on a rock with his hands on his head while the stop-and-frisk soldiers take their time “checking” on him, as if he’s their plaything. As a matter of thematic movie business, Omar’s encounter reminds us of similar exchanges between Jews and invading Nazis in films like The Pianist, or, more recently, between Solomon Northup and his tormentors in 12 Years a Slave. In this case, the hurt and shame are so unbearable that Omar and his friends must take action. This is presented as a given.

Events unfold. Omar comes under the influence of an Israeli intelligence op named Rami (Waleed Zuaiter) and is forced to make difficult decisions in which he’ll be the loser no matter what. Now his fence-top walking takes on metaphorical weight. He’s trapped forever between the “brigades” and the occupiers. Suddenly Nadia becomes a distant dream — terrible news, because they make a wonderfully appealing couple, with their glorious smiles and plans for the future. But all that comes crashing down.

Filmmaker Abu-Assad, a native of Nazareth, Palestine, has written and directed other films set in the Palestinian-Israeli cauldron. The allegorical drama Rana’s Wedding (2002) tells the story of a young Arab woman forced by her family to find a husband and marry him immediately or else be sent away to Egypt. In Paradise Now (2005), two young Palestinian men are sent on a suicide-bombing mission that gets postponed, nerve-wrackingly. Compared to those, Omar is more of an inwardly directed moral discourse set to the tune of having a cigarette lighter held to your testicles.

Everything that happens to everyman Omar has a queasy randomness to it, and his response is always perfectly justified but always tragically wrong. For Omar, life is a series of random absurdities proceeding to a triumph of injustice. Hostile people pop up out of nowhere, without warning, silently, like restless spirits, to drag him down. The twists and turns he takes running from the police lead him inevitably to the same pre-arranged end.

All this would be unbearable to watch, like the most tension-filled film-noir nightmare, if it weren’t for the strength reflected in the face of actor Bakri — performing in his debut film role, like the rest of the cast. His expression, body language, and impassivity sum up the Palestinian experience. According to Abu-Assad, Omar’s story is as close to the reality of life in occupied Palestine as any fiction could be. Something to think about.

Will Burger and Burrito Eaters Embrace a Fast Food Restaurant That...

Six East Bay Restaurants Where You Can Score Killer Fish and...