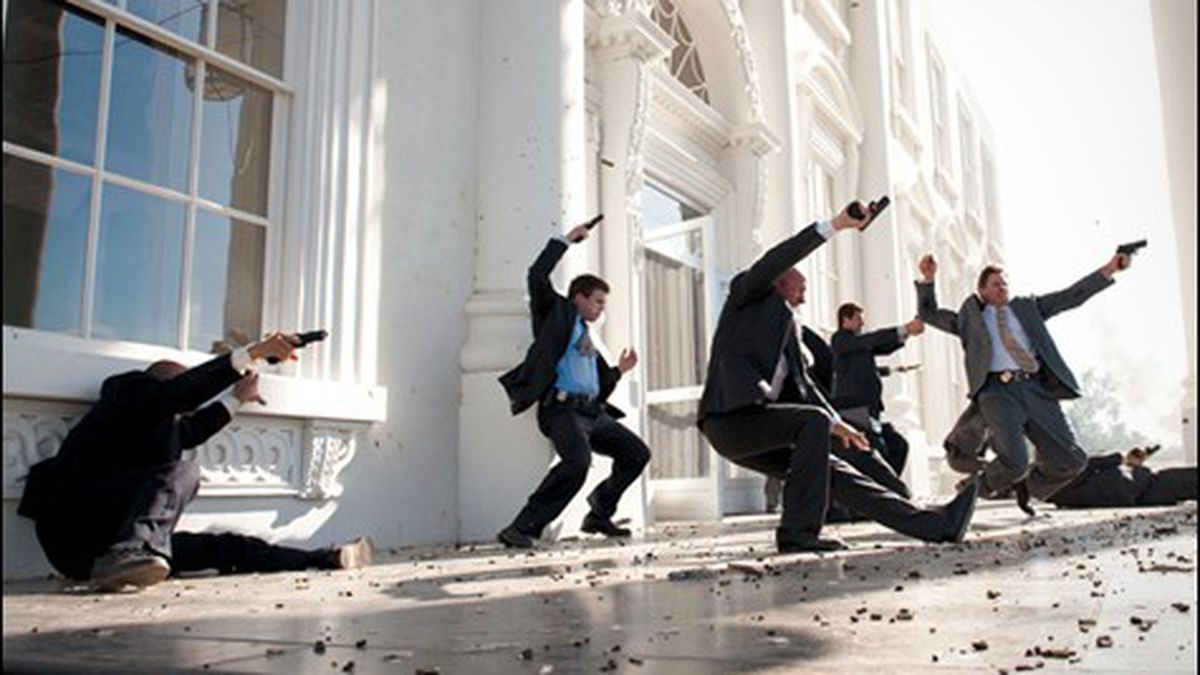 Phantom of the White House.

Olympus Has Fallen is a Secret Service action flick, a genre that usually has a topical political angle — after all, it’s part of the territory when guarding the US President. So we shouldn’t be completely flabbergasted when an organized, heavily armed group of North Korean terrorists — masquerading as South Korean diplomats on a state visit (don’t ask) — invade the White House, shoot all bodyguards, and take the President (Aaron Eckhart), the Secretary of State (Melissa Leo), and a roomful of other bigwigs hostage in the secret War Room in the basement (don’t ask), after first strafing DC civilians and knocking the top off the Washington Monument (don’t ask).

Luckily for the nation, Secret Service man Mike Banning (Gerard Butler) is waiting in the wings. When the invasion takes place, Banning, who has been demoted to a desk job in the Treasury Department (don’t ask, just suffice to say that if you come to this movie to see Ashley Judd play the First Lady, you’d better look fast), immediately sizes up the situation and sneaks into the smoking, corpse-strewn White House and establishes himself as the resident phantom. His mission: save the Prez, kill the foreign devils, stop them from detonating all of America’s nuclear missiles in their silos (don’t ask), and thwart the dastardly North Korean plans to force the withdrawal of all US forces from the Nor-Kor/So-Kor border. And then, after lunch ….

The chief villain is a smooth model type named Kang (K-Am actor Rick Yune). Naturally, we have to wait until Banning has slaughtered every other terrorist for their final confrontation. Butler and Yune get most of the meaningful screen time in Olympus Has Fallen. So Eckhart, Leo, Morgan Freeman (Speaker of the House — can we please make this reality?), and Angela Bassett (Banning’s SS boss) have little to do except look mortified. Director Antoine Fuqua just winds it up and sets it loose. They even trash the Lincoln Bedroom. Butler looks as comfortable throttling goons as he did coaching kids’ soccer in Playing for Keeps. Look at it this way — rebuilding the White House will provide hundreds of jobs for Americans. Just be sure to never let in any more foreign security guards with shoulder-length hair. Any kid could spot him as a baddie.