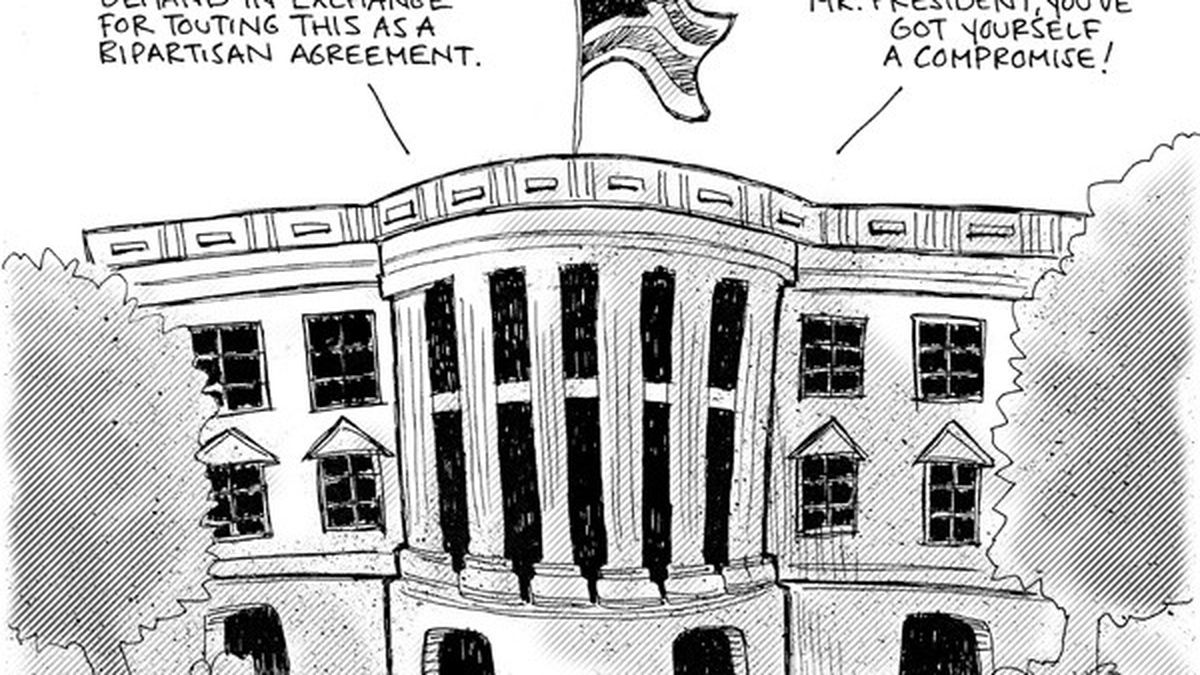 The president capitulates to the GOP once again and agrees to an all-cuts budget deal.

Rarely has a presidential candidate produced as much excitement in the liberal East Bay as did Barack Obama in 2008. Thousands of young progressives back then gleefully embraced politics like never before, volunteering for his campaign and clinging rapturously to his message of Hope and Change. But now three years later, deep disappointment seems to have settled in, as Obama continues his long, slow march toward the political right, repeatedly abandoning the progressive ideals that once endeared him to voters here.

The latest capitulation came in the deal over the federal debt ceiling. The president had vowed for months that he would not agree to a compromise unless it included new revenues, such as the closure of corporate tax loopholes like the ones that allow oil company execs to write off their luxury jets. But over the weekend, Obama abandoned that promise — much as he has done throughout his presidency — when faced with nihilist Republican legislators who were willing to allow the country to default on its debts and risk a worldwide depression if any deal included more taxes. And so the White House agreed to a debt-ceiling “compromise” in which Republicans got almost everything they wanted, including massive cuts to government spending.

Nobel Prize-winning economist Paul Krugman quickly labeled the deal a “disaster.” In a column for The New York Times, Krugman noted that cutting government spending is the worst possible move during an economic downturn. The cuts likely will further depress the economy, and thus result in even fewer tax revenues, throwing the nation deeper into debt. Indeed, the deal represented Obama’s complete break with Keynesian economics, the progressive economic theory that lifted the country out of the Great Depression seventy years ago. “Make no mistake about it, what we’re witnessing here is a catastrophe on multiple levels,” Krugman wrote.

The debt-ceiling deal also displayed yet another wide chasm between the Washington Beltway elite and the American people. Polls have repeatedly shown that most voters could care less about the federal government’s budget deficit. They care about jobs and the economy — two troubling issues that the debt-ceiling deal not only failed to address but likely will only worsen.

Politico reported on Monday that Vice President Joe Biden told fellow Democrats in a closed-door meeting that the White House had no choice but to agree to what Nancy Pelosi called the “Satan Sandwich” because they were negotiating with political “terrorists.” Biden had a point: The Tea Party diehards who were willing to destroy the economy in order to get what they wanted are terrorists. The other apt metaphor advanced by the administration was that they had to act like “adults” because they were dealing with “children.”

But the past three years also provides ample evidence that the latest Obama surrender was part of a much larger pattern. The president has repeatedly given up on what he said were his core principles in an attempt to appear to be a pragmatic, trans-partisan leader who’s fiscally responsible. In truth, Obama’s only principles seem to be that of getting reelected in 2012, about endearing himself to the fickle independent voter by portraying himself as the only “serious” politician on the national stage.

But the Big Sell Out also likely will come with a steep price. Many of those enthusiastic young supporters, especially from places like the East Bay, who propelled him to victory in 2008 aren’t going to be working 24-7 to get him elected again. Instead, Obama appears to have made the political calculation that he won’t need them.

He might be right, considering the pathetic Republican presidential field now assembling for next year’s campaign. The idea that current GOP frontrunner Mitt Romney will be the next president seems pretty remote right now. But the apparent calculus that Obama has made is one that is based on fear, not hope — fear of a crazy and/or vapid Republican candidate, rather than hope for one who will stand up for change that he says he believes in.

The nonpartisan panel tasked with redrawing California’s congressional and legislative districts released final drafts of its new maps last week, and they have the potential to seriously impact state politics. Namely: The new maps would likely give Democrats a two-thirds supermajority — which is needed to pass new taxes — in the state Senate, though they’ll probably fall short of that threshold in the state Assembly. It looks like no Bay Area Democrats stand to lose a seat — though Congressman Jerry McNerney, who represents Pleasanton, doesn’t live in his newly drawn district, so he’s planning on moving. The panel will officially vote on its proposed maps this week, after which the public will have two weeks to review them before they’re finalized.

It’s official: The Metropolitan Transportation Commission will be leaving Oakland, the Oakland Tribune reported. The agency voted 12-2 to leave its current space on 8th Street and buy an old post office building at 390 Main Street in San Francisco. MTC, the Association of Bay Area Governments, and the Bay Area Air Quality Management District have been looking for a new space to share. But ABAG voted a couple weeks ago in closed session to not go along with the move to San Francisco.

Governor Jerry Brown appointed UC Berkeley law school professor Goodwin Liu to the California Supreme Court, and his nomination is expected to be confirmed soon by a three-member panel. President Obama had nominated Liu to the federal Ninth Circuit Court of Appeals, but his nomination was blocked by a Republican filibuster in the US Senate because of Liu’s liberal views. Liu, who teaches constitutional law and education policy at Cal’s Boalt Hall, and who has previously worked at the US Department of Education, is expected to be one of the state Supreme Court’s most liberal judges (as well as its fourth Asian American).