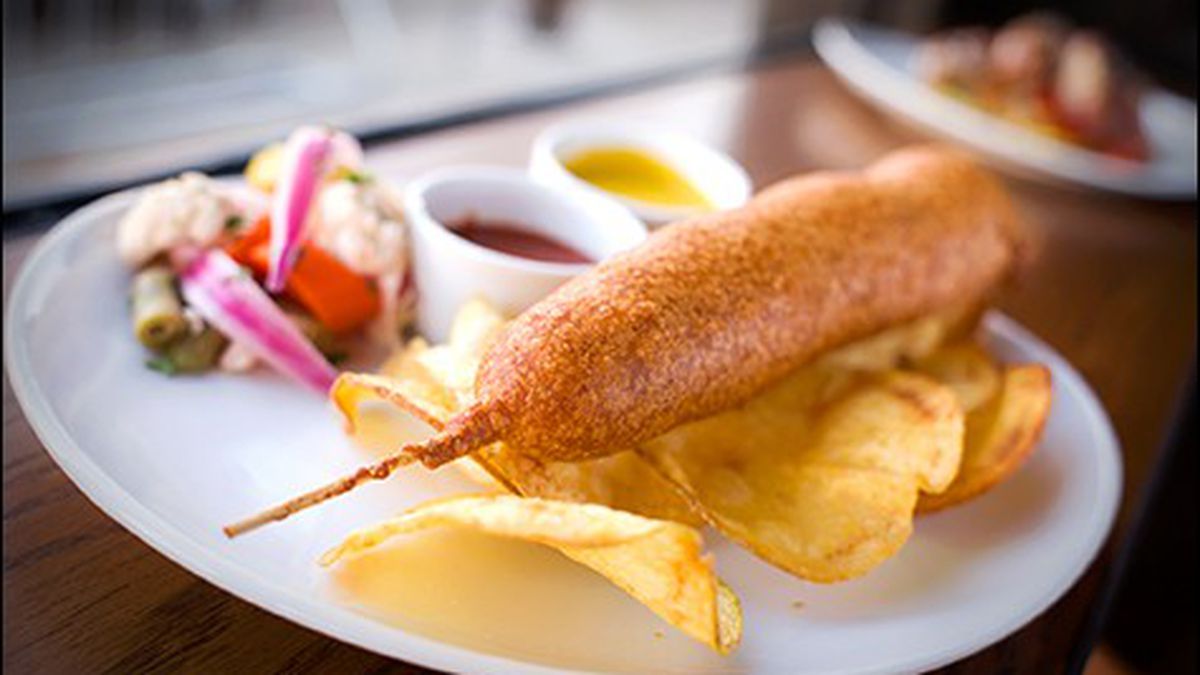 Oakland’s Hog’s Apothecary Is the Most Gourmet Beer Hall

Any conversation about Hog’s Apothecary ought to begin and end with its beer list: 33 rotating drafts (plus some obscure bottles) lovingly curated by a certified cicerone that serve as an amazingly diverse, eminently quaffable encyclopedia of California’s craft beer scene.

There’s sour beer, smoked beer, beer flavored with herbs instead of hops, beer that’s damn strong (more than 10 percent ABV), and beer — brewed with frankincense and myrrh — that would be suitable for Baby Jesus himself. During my visits, a full third of the available drafts were priced at $5 or less a pour, so even (relatively) cheap drunks have options.

You’d suspect that the food would play second fiddle at Hog’s Apothecary, which opened about two months ago in a space previously occupied by a dilapidated North Oakland laundromat. But although owners Bradford Earle and John Streit conceived the place as an American beer hall, where the beverages would be the biggest draw, they wanted the food to get equal billing. Streit (who previously cooked at Pizzaiolo, Pizzeria Delfina, and Rotten City Pizza) is the chef, and he has put together a menu that relies heavily on whole-animal butchery, heritage grains, and seasonal vegetables.

The food isn’t inexpensive relative to what you’d expect to pay at a working-class neighborhood beer bar — which, to a certain extent, is what Hog’s Apothecary purports to be. Better to accept the place for what it is: the most gourmet beer hall in Oakland.

There’s no question that sausages are having somewhat of a moment in the sun, and Streit and Earle touted their bar as mainly a sausage-and-beer joint early on, which isn’t entirely accurate: Hog’s Apothecary serves good — and, in some cases, exceedingly fancy — sausages made from animals that Streit butchers himself in-house, but there are only about four different sausage sandwiches on the menu at any given time, so if you’re looking for a wide variety of German classics, there are other restaurants that will better suit your needs.

My favorite among the sausages I tried, and the most popular option for the young and the frugal, was the corn dog ($8). Nearly a foot long and served on a stick, the pork-and-beef sausage had a smoky depth of flavor, and the fried batter shell — light, fluffy, flavorful — was particularly distinctive, reminiscent of a buckwheat crepe. (Later I learned that Streit had been experimenting with a new cornmeal at the time of my visit; he’s since switched back to one that yields a more “classic” batter.) The corn dog came with house-made mustard and ketchup, giant (and habit-forming) lard-fried potato chips, and an assortment of pickles.

During another visit I made a point of ordering the most frou-frou-sounding sandwich on the menu: a persimmon-chestnut chicken-and-pork-belly sausage served with melted leeks and a tart currant and quince jelly ($14) — the ingredient list alone made my head spin. Long story short: While tasty, this one didn’t quite add up to the sum of its parts, and, for something made with pork belly, the sausage was oddly lacking in moisture and richness.

For convincing evidence of the bar’s gourmet street cred, look beyond the sausages to the short but ever-changing selection of salads and entrées. An early October smoked eggplant and melon salad was as lovely and as seasonally appropriate a starter as anything you’ll find on the menu at Pizzaiolo or Camino — an inspired combination of cool, crisp watermelon; firm cubes of smoky eggplant; and briny olives. An entrée of chicken-fried chicken ($22) was a refined take on the Texas diner standard: a crunchy-battered deboned leg served with thick purple-hued grits (made from an heirloom corn varietal, ground in-house) and romano beans braised in a delicious smoked-tomato sauce. Finally, a Moroccan-inspired dish of herb-topped, medium-rare slices of roast leg of lamb ($24) was paired perfectly with sautéed nettles, sweet delicata squash, and soupy farro that had soaked up all the meaty juices — a dish that would have been right at home at the Bay Area’s most sacrosanct temples of California cuisine.

If you’re the kind of bar patron who only wants a few inexpensive bar bites to soak up your booze, your options are somewhat limited but uniformly excellent. Most notable: the huge, buttery German-style soft pretzel for two and any of the small charcuterie plates, which — at $5 apiece or $13 for three — are probably the best option for meat eaters who only want a light snack. The only item I didn’t care for were the Olin Browns, a somewhat dry and bland take on corn nuts.

I’d visit Hog’s Apothecary more frequently if dishes were slightly less expensive, but the truth is that the food is good enough, and the ingredients are of high enough quality, to merit the tariff. I would just love it if they added even one more option in the $10 range — even a simple, solid burger — to satisfy diners who’d like a substantive meal without having to delve into the pricier parts of the menu.

As for the atmosphere, the hipster is strong in this one, as they say — from the bar’s old-timey name to the careful cursive of a hand-painted M.F.K. Fisher quote (“a beer carried quietly three miles is better than one shot across three thousand on a fast freight”), from the shuffleboard table to Theo, the seven-foot-tall dancing pig sculpture that presides over the entire room like picture-book Olivia’s tipsy, loud-mouthed uncle.

Still, there is a comfortable, neighborhood-y feel to Hog’s Apothecary that helps mitigate its trendiness. A retractable open-air skylight gives the space the feel of a cozy outdoor courtyard. During the early evening hours, an inordinate number of small children (and their keepers) frequent the bar. And while the long communal tables mean it’s hard not to eavesdrop on your neighbor’s conversation, Streit said it also yields a sense of community that sometimes prompts strangers to share a plate of food.

Did I mention that the beer is amazing? In a single visit, I found a new favorite version of my favorite style of beer (Craftman’s Heavenly Hefe) and tried another — Moonlight’s woodsy, sweet, wholly hop-less Legal Tender — that might have been the most unusual (in a good way) I’ve ever tasted. Look, no one has ever accused me of being a booze expert (“Lightweight Extraordinaire” is more like it), but this is a draft list that’s liable to get anyone with even a modest interest in beer started down the path toward full-tilt geekery.