And city staffers appear to have known that the contractor was not telling the truth when it swore under penalty of perjury that it wasn’t involved in nuclear weapons work. 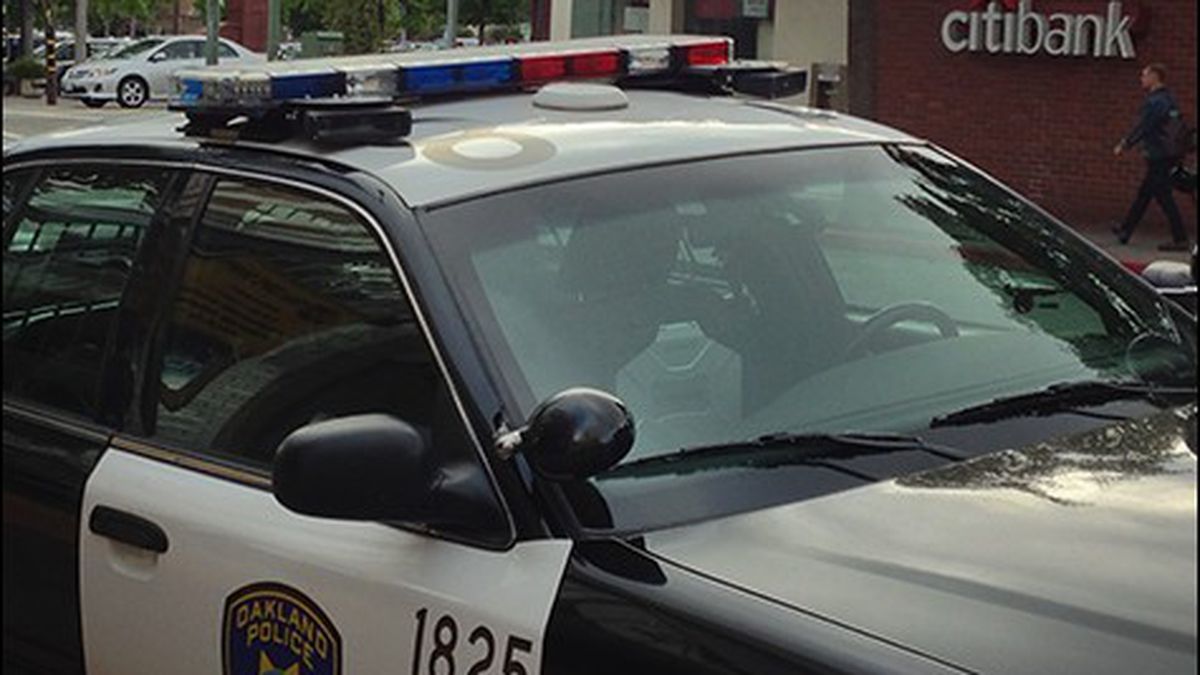 In their rush to build a controversial mass surveillance system, Oakland city officials appear to have allowed employees of the project’s prime contractor to perjure themselves by claiming that the company was in compliance with the city’s Nuclear Weapons Free Zone Ordinance. The ordinance, enacted by Oakland voters and the city council in the late 1980s, prohibits the city from doing business with private contractors that have ties to nuclear weapons. Public records show that the contractor, Science Applications International Corporation (SAIC), had been involved heavily over the years in nuclear weapons-related work.

Internal city emails obtained by the Oakland Privacy Working Group, a coalition opposed to the surveillance center, show that SAIC officials were concerned about Oakland’s nuclear-free-zone law early this year, and that they pressured the city to waive compliance with the ordinance before signing a final contract in March. City staffers, however, ruled out obtaining a waiver due to time constraints, and also because it would require approval by the full city council, making the contract subject to a public hearing. SAIC officials then signed a city document under penalty of perjury stating that the company was not involved in nuclear weapons-related work — when, in fact, it was.

Oakland officials do not appear to have specifically asked SAIC why it wanted the nuclear-free-zone waiver. Instead, staff in the city’s contracts and compliance office, the office of information technology, the fire department, and lawyers from the city attorney’s office allowed SAIC to sign Schedule P, Oakland’s “Nuclear Free Disclosure Form.”

The city does not appear to have conducted due diligence once the contract was in place to determine if SAIC’s claim of not being involved in nuclear weapons work was true or not. Only in July, after Ali Winston, a freelance journalist and contributor to the Express, appeared on a KGO radio show to discuss SAIC’s nuclear weapons contracts did city staffers revisit the issue, email records show. (Mr. Winston and I frequently collaborate on news stories, including several about the DAC and SAIC.)

Last week, the city council was forced to reopen the city’s contract for Phase 2 construction of the surveillance center, known as the Domain Awareness Center, due to a formal finding by the city’s contracts and compliance office that SAIC, in fact, does conduct “nuclear weapons work” as defined by the city’s nuclear-free ordinance.

The problem of SAIC’s nuclear weapons work first emerged at Oakland City Hall in January, before the city and SAIC signed a final contract to build the first phase of the Domain Awareness Center, called the DAC (pronounced dack) for short. On January 23, Renee Domingo, Oakland’s director of emergency services, sent an urgent email to staffers in the city’s technical and legal departments stating that “we must have a fully executed contract for the DAC project by no later than 2/1/13.” Domingo warned that if the contract wasn’t soon finalized “the Port/City is at risk to lose $2.9 mil[lion] of grant funding” from the US Department of Homeland Security.

Under pressure to finalize the deal quickly, Deputy City Attorney Celso Ortiz asked Ahsan Baig, Oakland’s technical project leader on the DAC, if he had spoken to the contracts and compliance office about “SAIC’s issues.” Ortiz’s email to Baig mentioned the Nuclear Weapons Free Zone Ordinance as one of SAIC’s issues. SAIC’s original proposal delivered to Oakland for the DAC project shows that the company “assumed that the City would grant SAIC a waiver” for the Nuclear Free Zone requirement.

Domingo then wrote to Deborah Barnes, Oakland’s director of contracts and compliance, about SAIC’s request for the city to waive the nuclear ordinance. Barnes responded on February 13 via email that it was not an option: “Renee, only the council can waive these policies.”

On February 13, Domingo broke the news to Anastasios Zografos, SAIC’s project leader for the DAC. “Hello Anastasios, we can’t obtain waivers on the following: living wage, nuclear freeze, and prompt payment without going back to the city council which is not an option. Can SAIC fulfill these requirements??”

Domingo added that “we can discuss further.” What was further discussed is not clear from the records released by the City of Oakland last week. Domingo did not return a phone call and message left with staff in her office.

What is clear is that SAIC is a nuclear weapons contractor with deep ties to the military and US Department of Energy offices that research, design, build, and deploy nuclear arms. Federal contract records show that SAIC has been winning contracts with the nation’s nuclear arms agencies since at least the 1990s. As recently as May 2013, SAIC obtained a $370,000 contract with the Navy for “engineering services, testing, and integration for nuclear command control and communication (NC3) messaging systems.” In 2012, SAIC was paid more than $2 million by the Department of Defense to act as a “technical support team for the Nuclear Weapons Council,” the joint Defense Department and Energy Department board that oversees the US nuclear weapons stockpile.

Federal contract records show that SAIC has been paid at least $78 million by the National Nuclear Security Administration (NNSA) since 2000. The NNSA is a special office within the Department of Energy that was created solely to oversee active nuclear weapons research, design, and testing facilities, and nuclear weapons waste dump sites.

“It wouldn’t have been hard if someone was trying to do that due diligence to find these contracts,” said Joe Newman, a staff member of the Project on Government Oversight, an independent nonprofit and government watchdog group. “They certainly could have found that information easily,” added Newman about both the SAIC contract officer who signed Oakland’s nuclear-free disclosure affidavit, and Oakland staffers who approved the contract. “SAIC is one of the biggest contractors, so would a city procurement officer have known without really researching? I don’t know. But I can’t imagine that the person who signed that form for SAIC didn’t know what the facts were as to the type of work they do.”

Lauren Darson, a spokesperson for SAIC, said that her company does have nuclear weapons contracts. She clarified, however, that SAIC was split into two companies in September, and that one of the new companies, Leidos Holdings, Inc., took the contract for Oakland’s DAC with it.

“I don’t know if Leidos has any nuclear weapons-related contracts at this point,” said Darson. “I only know the contracts we have. We do have contracts with Navy and DOE, but they do also.”

No contract records for Leidos Holdings were available on several official US government websites as the company is still in the process of incorporating and transferring contract files over from SAIC. But Leidos’ website unambiguously explains that the new company “provides support for the development and deployment of production technologies for materials, manufacturing, acquisition, and inspection and testing for replacement components inserted into nuclear bombs and ballistic missile weapons and for joint test assemblies.”

Leidos spokesperson Jennifer Gephart referred all questions to Karen Boyd of Oakland’s public affairs office. Zografos, who now works for Leidos, did not return a phone call inquiring about the company’s nuclear contracts, or the apparent effort by his team to obtain a waiver from Oakland for the nuclear-free ordinance back in January, before the DAC contract was signed.

Alex Katz of the Oakland City Attorney’s office did not respond to a phone call and email requesting information about Oakland’s contract policies and the Domain Awareness Center.

Last week the city council voted to re-open the DAC contract to the pool of vendors who bid on the project in 2012. Several dozen opponents of the DAC waited around until past midnight when the item, scheduled last on the agenda, came up for discussion. Miguel Vargas, an Oakland resident, told the council he believed that City Administrator Deanna Santana and others tried to hush the contractor’s violation of the city’s nuclear-free law by obtaining a waiver sometime in August or September. Contracts and compliance director Barnes, seated in the staff section behind the council members, blurted out: “That’s a lie!”

Emails show, however, that Barnes, Santana, and other staffers did, in fact, seek a waiver for SAIC as late as August — well after SAIC’s nuclear weapons links had become public knowledge. On August 2, Barnes forwarded Santana information about SAIC’s nuclear work, adding that “we are drafting a proposal for your review to include an option to secure a waiver ….”

Santana and Barnes conversed back and forth via email the next day. “Sounds like they are not in conformance with city policy but some elements are subject to waiver???” asked Santana.

“Exactly,” replied Barnes. “They are not in compliance with One policy only. A very old policy that many have questioned. ‘Nuclear Free Zone.'”

“What does it take to do the waiver and how often are they done?” asked Santana.

“The Ordinance describes a process requiring a public hearing and council action. We have never had a challenge or need for a waiver before,” wrote Barnes. “This is totally new.”

Barnes also did not respond to a request for comment for this story.