Cannon Dill and Brett Flanigan are taking a cross-country trip in May to paint murals in a dozen cities. 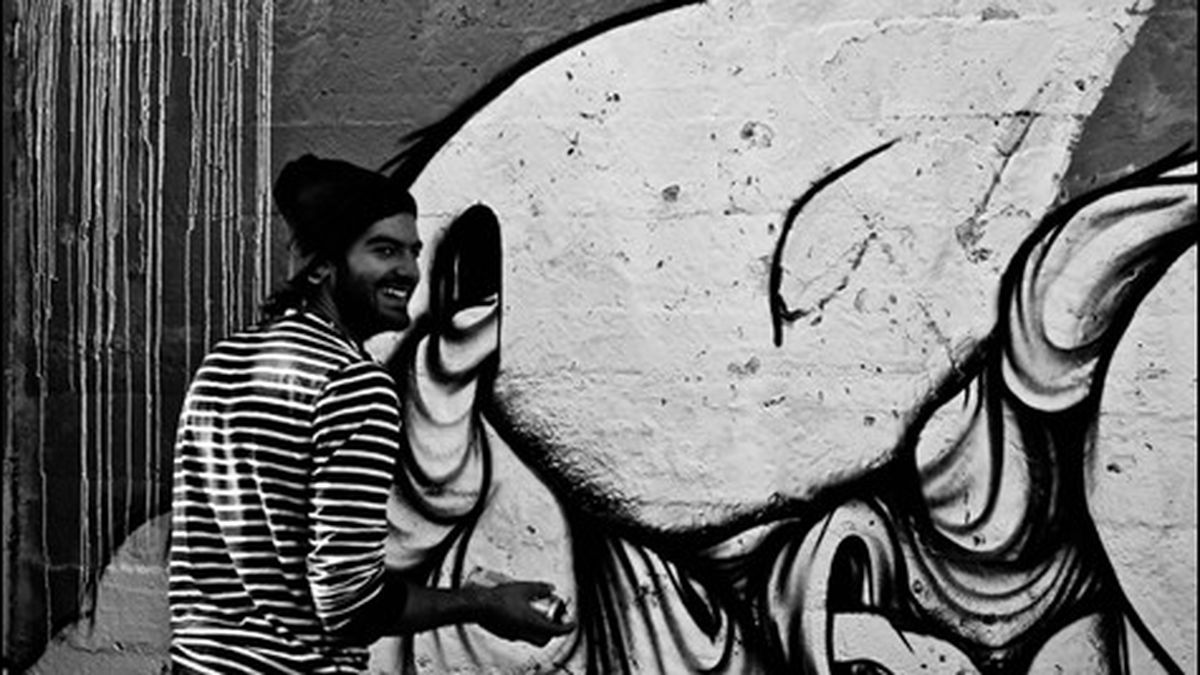 When it comes to art, Oakland muralist Cannon Dill doesn’t have any interest in following the rules. The 21-year-old said his art career took off when he started ditching class at California College of the Arts, where he studied printmaking, to participate in the Occupy movement.

“Hanging out down there was way more real than sitting in class,” Dill recalled recently, sitting in Oakland’s LeQuiVive Gallery — where his first solo exhibition, Heavy Water, will open on Friday, April 5. “All the vibes I got from everyone inspired me.” His pen-and-ink drawing “All Day Every Day” — a mystical-looking wolf cradling in its arms scattered tents and signs that read “Save your future” and “Fuck the police” — became a prominent image of the movement, with 10,000 photocopies distributed in Oakland and countless more printed off OccuPrint.org, where it’s still available for download. Dill recalled a teacher at CCA who failed him for drawing a dog’s head on his rendering of a nude figure model. It’s with that same rebellious spirit that he and fellow muralist Brett Flanigan will soon tackle their largest mural project to date, a month-long, cross-country tour in May to paint murals in a dozen cities.

“A lot of my friends go on tour — but they’re in bands. We wanted the same experience,” said Flanigan. “We looked at a map and said, ‘This is the trip.’ It’s a big loop of old family and friends.”

The two said they’re financing the trip on a tight budget and with the help of donations: They plan to drive Flanigan’s hatchback and crash on people’s couches. They said they’ve saved up about $1,000 for gas, and LeQuiVive owner Michael Broberg is buying them a month’s supply of paint and has set up a PayPal account on the gallery’s website to gather donations.

“It’s a unique take on public art,” Broberg said, adding that this is the first he’s heard of two muralists taking their art on a documented tour. Dill and Flanigan will likely collaborate with other artists along the way, but for the most part, this will be a chance for them to demonstrate Oakland’s raw, organic mural style.

Flanigan, who spent time in the Brooklyn graffiti scene and participated in the Atlanta mural project Living Walls, met Dill about a year ago. Around that time, Broberg had given Dill the wall space for one of his early murals, which is across the street from the gallery. Broberg later helped Dill and Flanigan secure the wall at 315 14th Street in Oakland for their mural “Arrival,” which they did with San Francisco artist Zio Ziegler. Ziegler, Dill, and Flanigan are also responsible for one of the most prominent murals in San Francisco, “Rush Hour,” which covers a temporary wall in front of an empty lot on Market Street between Seventh and Eighth streets.

Using spray paint, latex house paint, and, as Dill put it, “whatever’s cheap or free,” Dill and Flanigan paint their murals freehand, often getting permission to paint and finishing a piece on the same day. “Planning is waking up,” Dill said. “We talk while we paint and push one another to take risks so we both end up liking it.”

While Dill generally sticks to a black-and-white palette, recreating his highly detailed pen-and-ink illustrations on a large scale, Flanigan paints abstract shapes in fluid strokes of color, creating odd patterns that seem both primitive and futuristic. Flanigan also makes gouache paintings in a similar style. “I got into fine art through street art,” he said.

Increasingly, street art is intersecting with the world of fine art: Street artists could be running from the cops one day and showing their work in a gallery the next. In February, a mural by British street artist Banksy was removed from the side of a North London store and appeared for sale at a US auction house for an estimated sale price of more than $600,000, according to the BBC. Banksy and fifty other artists were featured in The Museum of Contemporary Art, Los Angeles’ 2011 show Art in the Streets — the first major US museum survey of graffiti and street art.

Still, it isn’t easy for street artists to practice their craft. Getting a building owner’s permission doesn’t give them — or their work — any protection. Most cities require permits to paint public murals, and even still, they can be painted over at any time. Dill and Flanigan said one of their murals on a roll-down gate in West Oakland was painted over. “That’s why I don’t want to spend a month on a wall,” Dill said. “It’s not forever. I want to get it done.” (They aren’t getting permits for any of the murals they plan to do on the road.)

“If you walk around the Mission and ask permission to paint a wall, the person you ask will say there were twenty people ahead of you,” Flanigan said. “Oakland has a ton of murals going up, too.”

Flanigan and Dill plan to document their mural tour on Instagram and on LeQuiVive’s blog, and Flanigan said he may produce a ‘zine about the experience. As for the rest of the details, they said they’ll figure them out along the way.