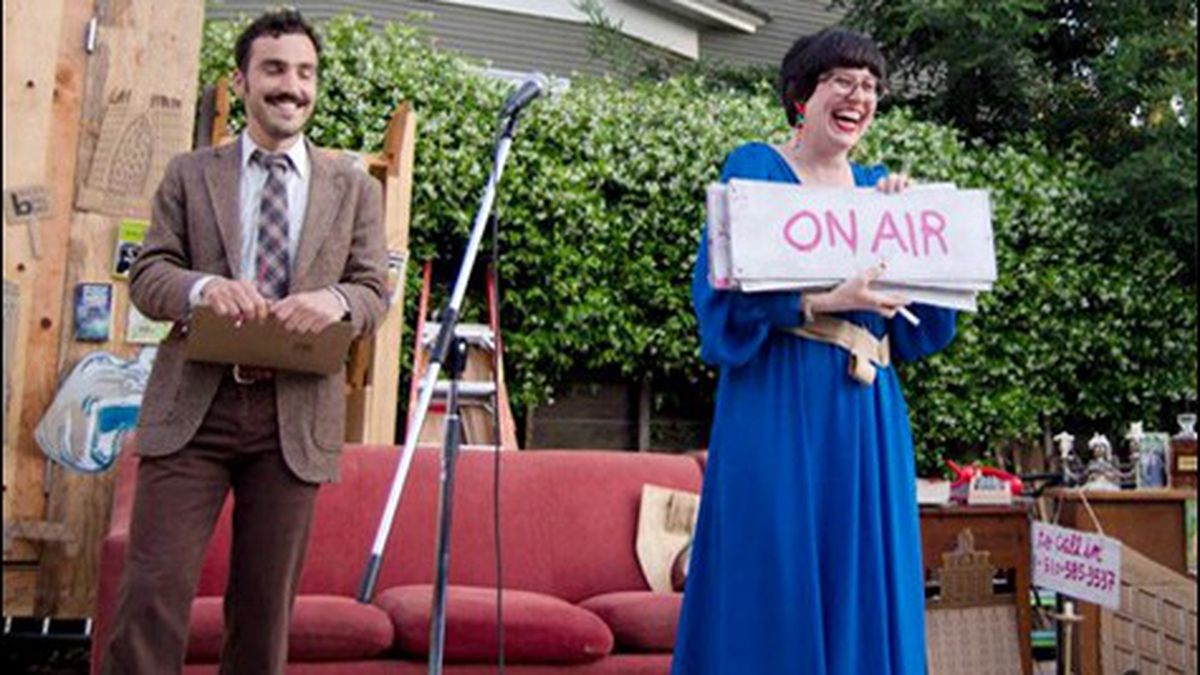 Jeremy Dalmas looks sharp in a suit, owns a big red couch, and is remarkably lackadaisical about having a couple hundred strangers in his yard. Together, these qualities make up the backbone of Oakland Nights … Live! — a late-night, Oakland-themed “talk show” that Dalmas and cohort Julie Crossman have been co-hosting in the backyard of his North Oakland home once a month since last fall.

Dalmas was an active musician before becoming an informal talk-show host. And while he liked performing, he said he felt awkward “just sitting and playing music in front of people.” So he started incorporating interactive elements into his live shows, and also became the charismatic host of the Seaweed Sway Showcase at the Make-Out Room in the Mission, where he once executed a theatrical reenactment of the Oregon Trail computer game. Crossman occasionally performed in Dalmas’ skits, which set them on a path toward a show all their own.

Touted as “half Johnny Carson, half Pee-Wee’s Playhouse, half Fresh Air, and all Oakland,” Oakland Nights borrows from elements of the traditional talk-show format with ample use of cue cards during on-the-couch interviews, a cardboard cutout of the city’s skyline, a swanky house band, stand-up comics, and even a telephone to field live calls. Yet that’s where the similarities end. From the minute Dalmas and Crossman (who has co-hosted the show dressed as a hot dog and a medieval knight) appear onstage every first Saturday of the month, it’s clear that their production is the sort of theatrical free-for-all where the audience is as much a part of the show as are the guests, and where the rules fly so far out the window that they end up halfway down the street. “We try to make it really fun and interactive, and the audience members are sort of welcome to say anything at any point in the show,” Dalmas said.

And while each “episode” flows more or less like a talk show, the tone and format tends to be driven by the monthly theme. June’s show, “Book Club,” featured readings by authors like prize-winning poet Dean Rader. Another included a phone interview with a local astrophysicist stationed at the South Pole. And it’s not uncommon for shows to include talks with small-business owners and local nonprofits. Dalmas said he’s trying to strike a balance between entertaining and informative, and even has tentative plans for an election-themed show in October, in which he’ll invite City Council District 1 candidates as guests. “There are a lot of people doing a lot of interesting things in Oakland,” Dalmas said, “and we try and focus on things that are a little less normal.”

The next show, “Oaklandrants,” on Saturday, July 7, is a take on the popular TEDTalks series. The Oakland Nights version will include brief presentations on “Regional Specificity in Department of Transportation Signs” and “80s Post-Punk Influence on Bay Area Dance,” plus a medical student’s musings on gonorrhea — which, Dalmas half-quipped, is an “interesting disease.” At 3911 Clarke St., Oakland. 7:30-10 p.m., free. 510-585-3537 or OaklandNightsLive.com