'On Christmas Day I’m being evicted. Can you believe that?' 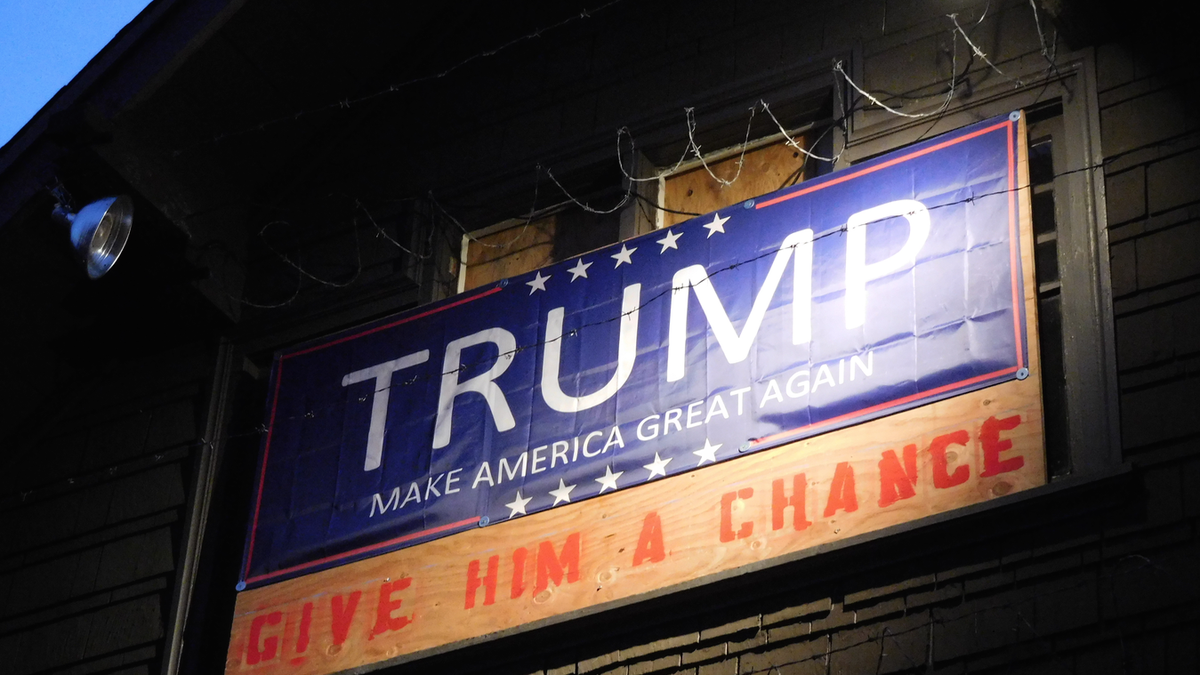 Share
Facebook
Twitter
Linkedin
Jahahara Alkebulan-Ma’at couldn’t believe it: His landlord recently gave him an eviction notice, for Christmas Day, then decided to hang a giant pro-Donald Trump sign out front of his apartment.

Alkebulan-Ma’at moved from Chicago to Oakland in 1995 and immediately settled into the small, one-bedroom apartment a couple blocks from Lake Merritt. He hasn’t moved since. “Everything I need has always been right here, just a short walk away,” the 63-year-old explained.

His former landlord of 21 years, James Hardy of Lafayette, always kept the place affordable, so when Alkebulan-Ma’at retired in 2014, due to a disability, his social security check was enough to cover rent.

But this past May, a familiar story in the East Bay: The building was sold, and his new landlord is now evicting him. His scheduled move-out date: December 25.

“On Christmas Day I’m being evicted. Can you believe that?” said Alkebulan-Ma’at.

The company that now owns the building is called Oakland Redevelopment Group. According to Alkebulan-Ma’at, the man behind the group, Eugene Gorelik, told him that the three apartments in the building, including his, were “illegal” units and were never been permitted by the city. He says Gorelik wanted him gone.

Even before they purchased the house, Gorelik and his wife, Jessica Sawczuk, offered to buy Alkebulan-Ma’at out of his apartment, according to emails and other documents that both Alkebulan-Ma’at and Gorelik shared with the Express. Alkebulan-Ma’at replied that he had no intention of leaving until he found a new, affordable home in Oakland.

“I’m a senior, on disability, and on waiting lists for senior housing, but it takes years,” he said.

In June, construction crews began work on the two unoccupied units in the front of the house, according to Alkebulan-Ma’at. Gorelik and Sawzcuk also obtained a permit from the city to demolish Alkebulan-Ma’at’s apartment, which is an addition attached to the back of the two-story home. Alkebulan-Ma’at still refused to move. He says he’s continued to mail his rent checks on time.

Then, in October, he received an eviction notice from the attorney Daniel Bornstein. Along with the eviction notice, his landlord sent two checks totaling $3,646 as a buyout, but Alkebulan-Ma’at said he hasn’t cashed them.

Shortly after the November 8 election a giant sign supporting Trump — reading “Make America Great Again” — appeared in the front yard. It was attached to the trunks of two redwood trees, affixed high enough so that drivers on Interstate 580 could see it.

Unsure who put the Trump sign there, Alkebulan-Ma’at texted his landlords. Sawczuk told him it was Gorelik’s idea.

Several of his neighbors were upset about the sign, he says, and the sign was eventually stolen. Alkebulan-Ma’at said that the attention it draws to the house, and the vandalism, makes him feel unsafe.

But Gorelik was undeterred by the stolen Trump sign, and later replaced it, this time posting it on the front of the house. Below Trump’s name he wrote “give him a chance” in bold, red letters. He also surrounded the billboard with barbed wire, and lit it up with flood lights. Two more new signs tacked on the front of the house warn that the property is under video surveillance.

Gorelik contends that his effort to evict Alkebulan-Ma’at is legal, and that he’s offered his tenant relocation assistance and plenty of time to make plans. “I treat people the way I want to be treated,” he wrote in an email.

“I’ve gone above and beyond what any other landlord would in terms of giving Jahahara advanced soft notice of our intentions even before we purchased and assistance finding alternative housing,” Gorelik wrote. “Jahahara has rejected [offers of assistance.]”

Gorelik didn’t respond when asked about what he plans to do to the house, or whether he has considered trying to legalize the addition that Alkebulan-Ma’at has lived in for 21 years, instead of evicting him.

The eviction notice that Gorelik’s attorney, Bornstein, sent to Alkebulan-Ma’at claims that “the city has determined that the premises you occupy is illegal and therefore exempt [from Oakland’s rent control and tenant protection laws] because of the status of being an illegal unit. In other words, it cannot be rented or made available for rent in its present state.”

However, the interim-director of Oakland’s planning and building department, Darin Ranelletti, wrote in an email that the city hasn’t determined anything of the sort. “No City inspections have been performed so far on the permit and we have no knowledge or complaints of illegal units on the property,” he explained. “The City has NOT made a determination that there are illegal units on the property or that the units are exempt from the Tenant Protection Ordinance.”

And, while city records classify the property as a single-family home, Alkebulan-Ma’at hasn’t filed a petition with Oakland’s rent-adjustment program, so that department hasn’t ruled yet on whether or not his unit or lease is covered by the city’s rental housing laws.
[pullquote-1]The only inspection the city has conducted of the property was on November 18 — after someone complained about the Trump sign.

“I’ve been out there taking photographs,” said Chris Candell, a city zoning inspector. “Someone called and complained about a ‘barbed wire fence and sign.’”

Candell said he expected to find a construction fence and construction company sign, not a giant political sign for Trump. He hasn’t yet determined if the mini-billboard violates any of Oakland’s zoning regulations.

Gorelik wrote that he put the pro-Trump sign up because he was “upset by all the protests & hate,” referring to the anti-Trump rallies that swept Oakland in the days after the election. “What’s to complain about. Being patriotic?” he asked in an email.

“Security around the property has increased since Trump sign has gone up because I’ve lit up the front, added signs and cameras,” he wrote.

Alkebulan-Ma’at said that he complained to Gorelik earlier about security problems on the property, but claims that it was only after the Trump sign was vandalized that his landlord took action, and that the surveillance cameras, floodlights, and barbed wire are only there to protect the Trump sign.

Gorelik has purchased and redeveloped other properties in Oakland. His Oakland Redevelopment Group company currently owns another single-family home, on Weldon Avenue, according to county records.

In 2012, Gorelik and Sawczuk purchased a large, three-story house that was split into five apartments near Highland Hospital. They spent $300,000 remodeling it as a multi-unit building, and sold it earlier this year for $1.2 million, according to real estate listings.

Gorelik’s attorney, Bornstein, is also his boss. Gorelik is a licensed real-estate broker with the Bay Property Group, where Bornstein is a founding partner. Bornstein is known for holding workshops for landlords, teaching them how to carry out “no fault” evictions, and other strategies to get rid of tenants.

Oakland has a large, but unknown, number of un-permitted housing units such as the one Alkebulan-Ma’at lives in — mostly additions, basement apartments, and converted garages.

Ranelletti said that when the city discovers an illegal housing unit, it typically tries to work with the landlord to legalize the unit in order to maintain much-needed housing stock.

But if the landlord wants to demolish it, there’s often little the city or a tenant can do to stop them.

Even so, Alkebulan-Ma’at said he intend to stay. “My unit hasn’t been determined illegal yet,” he said. “I’m a senior, I’ve been here 21 years, and I shouldn’t have to leave — I shouldn’t be evicted.”