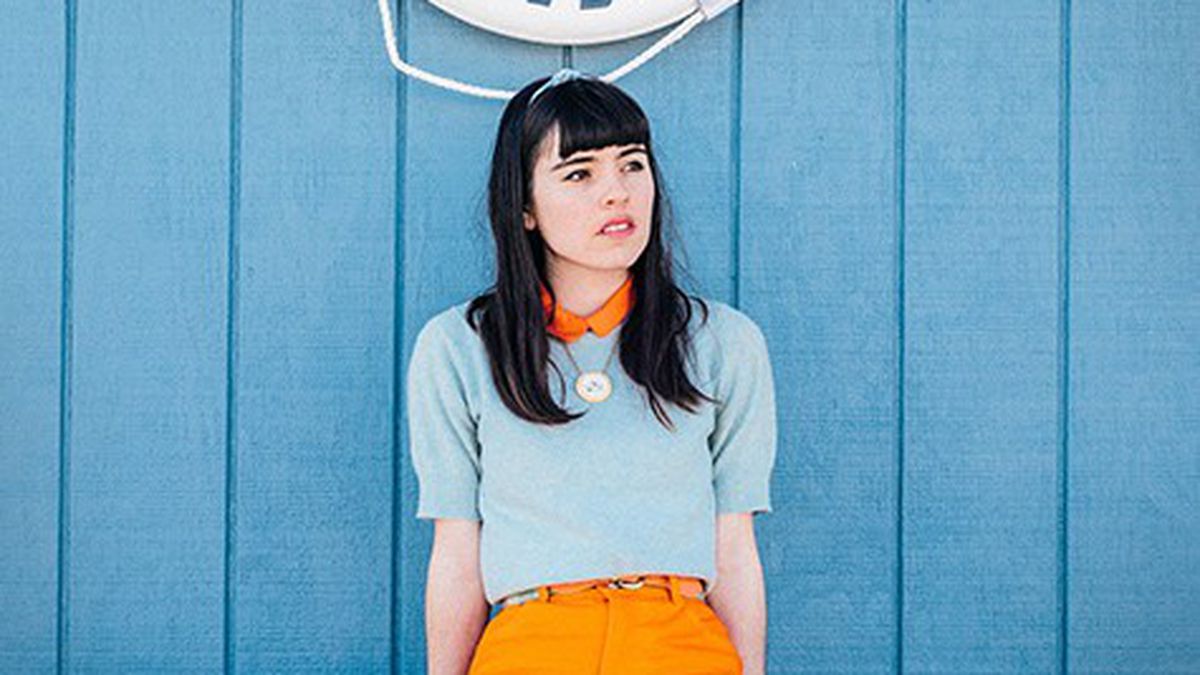 The artist impresses with her understated yet evocative songwriting on her upcoming EP, Never Going Home.

Oakland-based singer Hazel English rose quietly but steadily through the ranks of the Bay Area indie scene with her evocative, sensual bedroom pop. The 25-year-old artist — who’s originally from Sydney, Australia — is somewhat mysterious. But despite her tendency to stay out of the public eye, her airy, finger-plucked sound has earned her a growing following.

Her new EP, Never Going Home, is set for release on October 7 on Marathon Records. And she’s already gearing up to tour the West Coast and parts of Europe. It’s safe to say she has a big year ahead.

After moving to Oakland in 2012, English immediately set her sights on her music career. She collaborated with popular local singer-songwriter Jackson Phillips, who makes similarly shoegaze-y, folk-inspired pop as Day Wave.

“Considering Jackson produced the EP, there are going to be parts that are reminiscent of Day Wave. But I don’t think about it like that because it’s a collaboration,” wrote English in an email interview. “It’s not as if he influenced me. It’s more like we both came with our influences and met in the middle. I like to collaborate when it comes to any kind of art form — I feel more invested in the work if there are other people involved.”

English said Never Going Home came about through a somewhat spontaneous process. “When I put out the first song I was really just testing the waters,” she explained, referring to the EP’s debut single, “It’s Not Real.” “It felt like people were really responsive to releasing the songs individually so I just kept doing it when it felt right.”

She recorded the earthy, crisp track during an in-studio performance at Tiny Telephone Studios in San Francisco, demonstrating her prowess as a live performer.

When English was growing up in Australia, her parents immersed her in the music of Seventies artists such as The Bee Gees and Cat Stevens. “My dad was really into blues and folk music, but he also introduced me to bands like Led Zeppelin and Pink Floyd,” she recalled.

The Bay Area’s reputation as a hub for free-spirited counterculture attracted her to the region and eventually inspired her to relocate. “Honestly it was just a gut feeling,” she said. “I knew there was something waiting for me here, I just didn’t know what.”

In the states, she began working with artists such as Captured Tracks’ electro-pop group Craft Spells, San Francisco garage rockers Hot Flash Heat Wave, and Day Wave. The support of these artist helped her quickly attract a national following as well as a local one.

When asked about the moment she decided to pursue music as a profession, she replied, “I’ve always wanted to pursue music. I guess for a long time it was just a hobby and I didn’t really know what would come of it. … I decided to shut out all of the other creative projects and things I was involved in and dedicate myself just to writing and recording.”

English’s music is focused and touching, and pulls from artists such as Marianne Faithful and Trish Keenan of Broadcast. She has a level of self-assurance and stability in her live performances, balancing it with the ease of her dreamy melodies.

The five songs on Never Going Home are well crafted and flow into one another. And the EP’s mellow, jangly ballads are more expressive through melody than actual lyrical content. The album is sweet, pleasing to the ear, and somewhat addictive. It easily transitions from background music to commanding listeners’ attention.

English’s music finds strength in its subtlety and makes a statement without being showy. Her pop ballads are equal parts accessible and listenable — which is perhaps why they’ve caught on with audiences so quickly.

Concluding our interview, the musician had some advice for young artists: “Don’t worry so much about being prepared, or taking lessons or whatever. If you love playing music just go for it and you will learn what to do in the process. Take risks because that will take you a lot further than playing by yourself in your bedroom. Every time I’ve taken a huge leap of faith it has always paid off.”

Indeed, English is quietly gutsy and reminds us to never underestimate a determined young woman with talent, vision, and the patience to see her art through to completion.