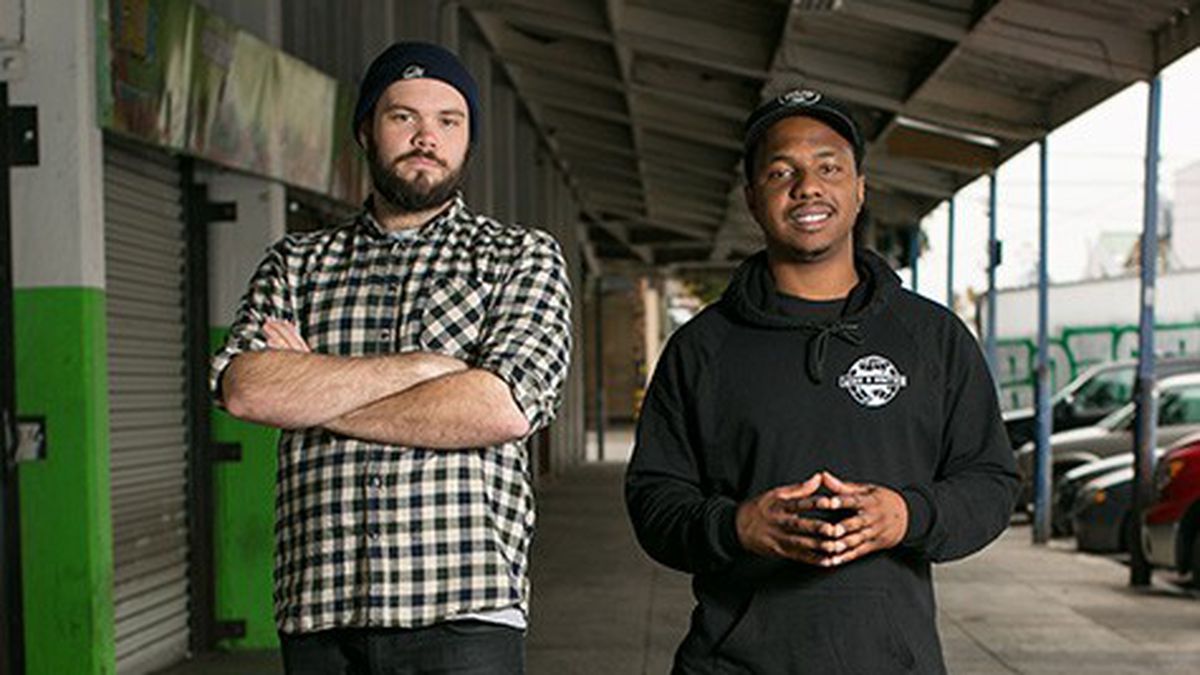 How the Oakland natives behind Wine and Bowties went from running a taco stand to throwing a micro music fest with Kool A.D., Teebs, and Kreayshawn.

You might have heard of the Oakland-based online magazine Wine and Bowties (WineAndBowties.com). Maybe you’ve been to one of their warehouse shows in West Oakland, or to a documentary screening they’ve hosted at Oakland Surf Club. Or you might have seen their crew roll past you on the street during one of their big bike parties — leaving you thinking, “Those kids look hella fun.”

The Wine and Bowties founders are best friends Max Gibson and Will Bundy. They grew up together in Oakland, then both went to college at Loyola Marymount University in LA. When asked about the origins of Wine and Bowties, they traced it back to an undergrad-era taco endeavor. The short version is that one night, after a Jay-Z concert, they befriended a food cart owner. Soon enough, they started their own late-night setup near campus and dominated the drunk-munchies market. After three weekends, they got shut down, but not before recognizing their ability to make things happen. “We put our heads together on that, and we kinda surprised ourselves,” said Gibson. They realized that if they applied that initiative to something that they actually cared about, they could start something really cool.

Soon after, on the first day of 2009, Gibson launched WineAndBowties.Blogspot.com as a platform for highlighting his personal taste. Bundy hopped on soon after. Fast forward to today: Wine and Bowties has migrated back to the Bay Area from LA, upgraded to a sexy web interface, and brought on a rotating cast of solid contributors. In addition to running the website, they host a broad range of events, including small-scale discussions on politics and art and massive parties featuring the likes of rapper Antwon.

On November 29, they’ll be hosting the biggest Wine and Bowties event to date. It’s a micro-festival called Feels II (a follow-up to a previous group art show), which will take over two warehouses in West Oakland. One venue will feature a main stage for musical performances, and the other will offer a second stage and a huge group art show. In between the two, dinner options will be available, including Southeast Asian street food from SUP, and Tamarindo’s El Taco Bike pop-up. The music lineup features Kool A.D. (formerly of Das Racist), Teebs, KJ Dreayshawn (hint: It’s Kreayshawn), Daghe, Trill Team Six, and a bunch more. On the art side, they’ll showcase works by painter Bud Snow, illustrator Jus Ontask, photographers Trappedout Freeman, Madison East, Kris Kirk, and fifteen others.

Gibson and Bundy said that all they had to do to hook the artists was reach out around them. Being art and music appreciators from Oakland, they’ve built up a solid network of creative peers. They’re also the kind of cool-yet-approachable people who are difficult not to befriend. But they pointed out that that’s just the collaborative Oakland vibe. Here, they’re able to throw parties with more than three hundred people that still feel like a room full of friends. “Being in Oakland, there’s just a tremendous amount of ground-level creativity happening in music and visual art,” said Bundy. “If we can do something to bring all those people together and put them in the same room, then that’s a beautiful thing.”