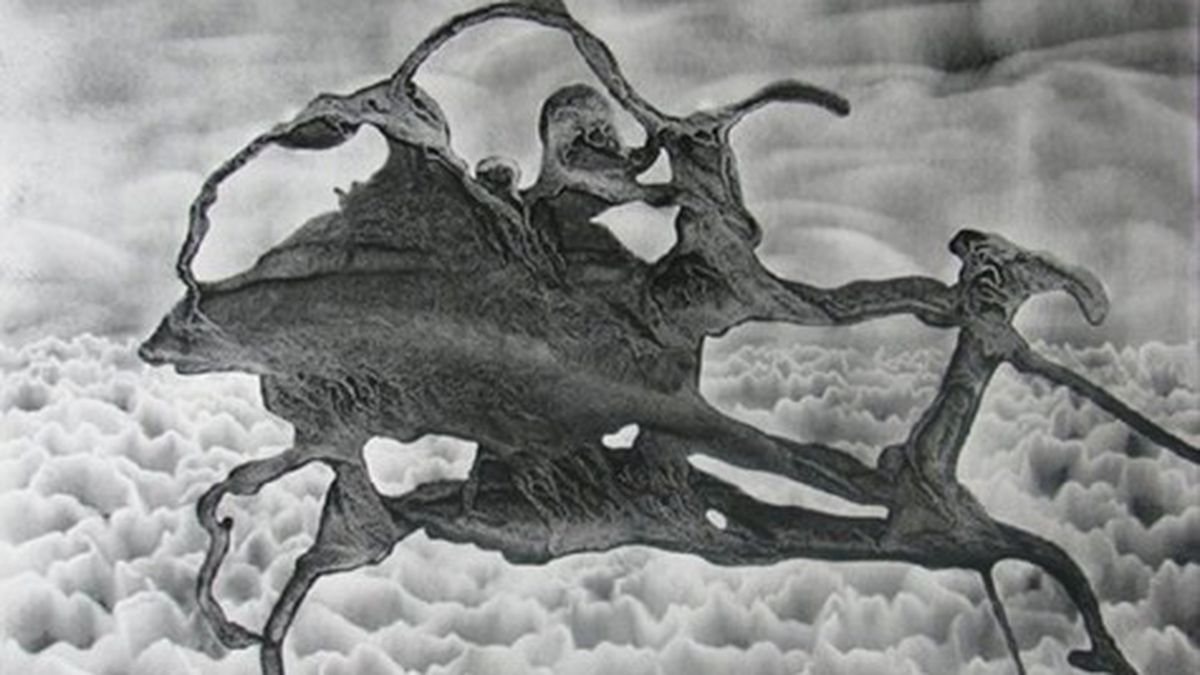 Oakland artist Ron Weil has a wealth of life experience. He was born in New York, but grew up in Detroit. He studied economics at the University of Michigan, then urban geography at UC Berkeley. He has been a teacher, a real estate developer, an urban planner, a community worker, and a cab driver. He also paid his children’s way through college as a professional poker player.

Two years ago his wife died, and in his grieving process he began an intimate relationship with paper. He was seeking something that would surprise and occupy him. He found himself escaping into worlds of material experimentation. Eventually, he developed an artistic technique using charcoal powder through which he now builds abstract dreamscapes on paper, producing works that appear remarkably tactile, and forming visual spaces with incredible depth. A broad selection of Weil’s work is now on view at Vessel Gallery (471 25th St., Oakland) as part of the show Discovering Uncharted Territories, aptly paired with sculptures by William Schwob.

Weil began his experimentation by creating prints with wet graphite, placing the liquid and powder on plastic, then laying the paper on top to capture watery impressions. “I liked it, but it had nothing to do with me,” Weil said in an interview.

He switched to charcoal powder, and began sifting it directly onto the paper. He then began experimenting with a variety of tools, such as a vacuum cleaner, in order to manipulate the powder. Finally, he found that he could use hypodermic needles as a means of applying air pressure and water to achieve a dramatic range of textures untouchable through other media. “I wanted it to look like it was done by nature, which it is, essentially. It’s like waves pushing around sand or wind picking up sand,” he said. “There is still that randomness and probability involved.”

Weil’s technique is driven by improvisation, but the spatial representations he creates often appear to reflect his interior state. Each one functions as a poetic statement about the chaos that underlies life, as he carefully negotiates the unpredictability of his medium to form concise visual statements. A number of Weil’s pieces in Uncharted Territories feature fine white lines tangled in unruly arrangements, a literal unraveling of his past.

Weil’s wife would regularly take naps in a hammock on their front porch. After she died, the hammock laid on the deck for a long time, deteriorating. Eventually, Weil began to untwine the thick ropes and use them to produce swarms of lines. After each print, he would carefully untangle each rope further, forming a series that gradually produced finer and finer lines until the hammock had been entirely transformed into something new.

The monochromatic spaces that Weil creates are not a means for outward escape, but, rather, inward exploration. He is interested in testing his own ability to employ tools as simple as powder and color palettes as limited as the gray scale to trick others into seeing improvised, abstract dreamscapes.