Last week, several Oakland City Council members proposed a substantial overhaul of Oakland Animal Services (OAS), the chronically understaffed city-run shelter. The proposal, following mounting criticisms that the shelter does not have adequate resources to care for the animals it takes in, is to move OAS from its current management within the Oakland Police Department and instead establish civilian staff oversight.

A week later, city officials have offered something of a response with a memo from the police department providing details on “recent efforts to enhance rescue efforts, hire additional staff to fill vacancies and improve overall Shelter operations,” city spokesperson Karen Boyd wrote in an email alert yesterday. The report does not address potential restructuring, but does provide a snapshot of the shelter’s vacant positions as well as new data on euthanasia rates.

The memo (full PDF viewable here) provides details on the hiring process for a wide range of positions that are budgeted but currently unfilled, including multiple animal care attendants and animal control officers, a police records specialist, a part-time veterinarian, and an animal control supervisor. This chart from the report outlines the current status, with “pending” indicating that the application processes are in the works, according to the city: 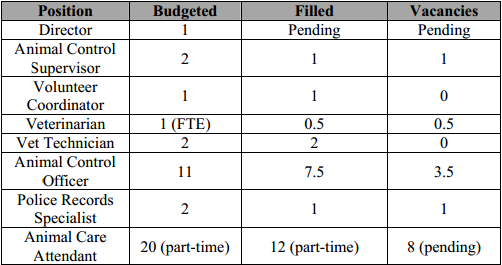 Of note, the new shelter director the city brought on in January has been on paid administrative leave since March pending an internal investigation that apparently could last up to a year. That means an interim director from OPD is now overseeing the shelter after a different interim director ran the shelter from April to December last year.

In general, the understaffing situation outlined in the memo is fairly similar to what it was in December when we first wrote about criticisms from shelter volunteers about the lack of resources. For months, some of these advocates have also raised concerns about the shelter euthanizing animals when it is not necessary.

The new report states that a total of 389 animals have been euthanized this year so far, representing 28 percent of its total 1,398 intake in 2014. The memo does not include a year-to-date comparison for that figure, but does show that from 2011 to 2013, the annual euthanasia rates have declined slightly:

The report also offers this snapshot of January to April rescue data over the last three years:

Regarding “the proposal of transitioning the Shelter into a standalone Department,” as the new memo describes it, the city said it plans to bring a report to the city council’s public safety committee in June.