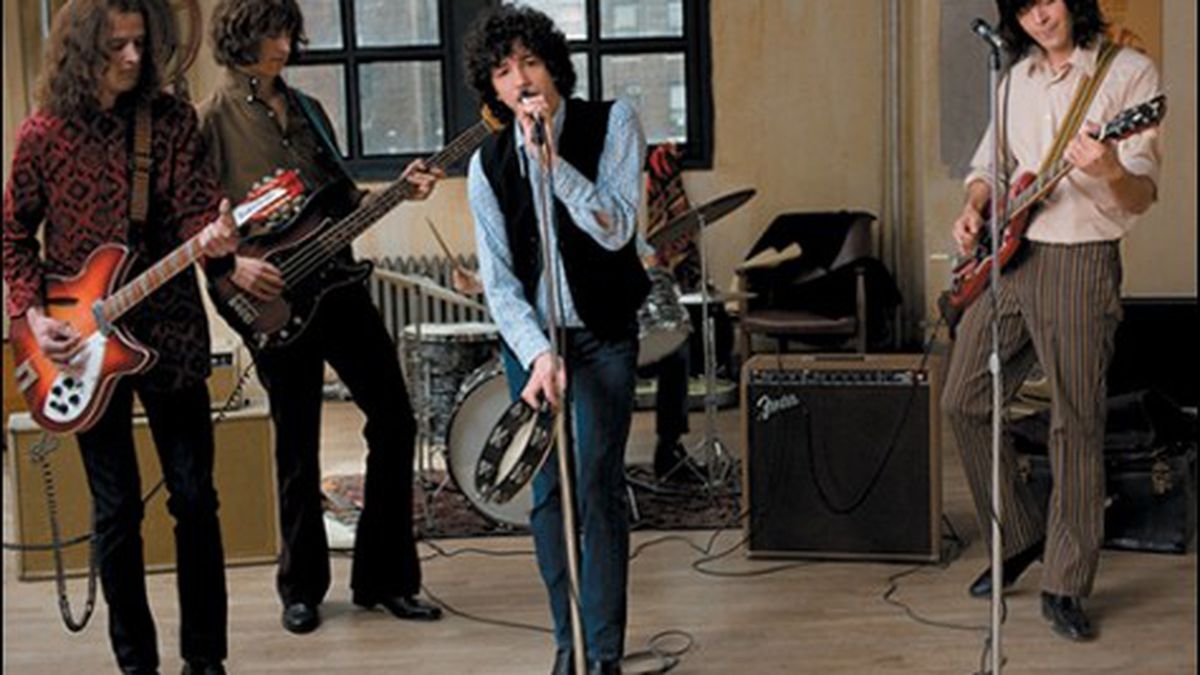 Time is on their side.

First, before we step into the time machine for Not Fade Away, let’s summon the image of Mick Jagger and Keith Richards, that pair of randy zombies, cavorting on stage as they approach the age of seventy, chugging once more through “Tumbling Dice” in Newark, New Jersey four weeks ago, accompanied by Bruce Springsteen. Now hold on to that image, and try to imagine a day when The Rolling Stones were brand new, and the future “Boss” was a kid plinking on a guitar in his bedroom in Freehold Borough, down the Jersey Shore.

Douglas Damiano (played by John Magaro), the main character of David Chase’s euphoric/melancholic rock ‘n’ roll dream Not Fade Away, might as well have been modeled on Springsteen, although that fascination with the rock musicians of the Sixties was shared by many other kids, in real life as well as in movies.

Like countless thousands, Jersey boy Doug gets his head bent out of shape by the Stones, Dylan, James Brown, Van Morrison, Bo Diddley, the Kinks, et al, and tells himself, “Shit, we can do that, too.” Galvanized by Top 40 radio and vinyl records, he and his suburban buddies Gene (Jack Huston, grandson of filmmaker John Huston), Joe (Brahm Vaccarella), and Wells (Will Brill) start a basement cover band and learn the patterns. The story moves from station to station. As Doug progresses into his “Positively 4th Street” period, he bonds with Grace (Bella Heathcote), the neighborhood teenage beauty. All this — the hair, the music, the bell-bottom jeans, this strange fondness for Antonioni movies — is a mysterious raincloud to Doug’s Italian-American family, especially his working-stiff dad, Pat (James Gandolfini). But Doug’s younger sister Evelyn (Meg Guzulescu) can’t avoid catching the wave.

In Chase’s impossibly sweet screenplay, Doug’s life assumes the hazy contours of a cherished memory. Despite rivalries and a broken heart or two, no one is ever in physical danger. There are no armed robberies, knife fights, or prison sentences, just all-American middle-class growing pains taking place under a bombardment of pop culture. Doug takes a day job on a landscaping crew but has high hopes for film school. And yet, with some of the familiar touches writer-producer-director Chase used in his monumental cable series The Sopranos, Doug’s wrestling match with the zeitgeist is tinged with a sadness that won’t fade away.

The drug troubles of Grace’s sophisticated-but-unhappy sister Joy (Irish actress Dominique McElligott) offer a tantalizing glimpse into the dark bohemian groove. Egos ebb and flow. Down to the smallest part, the characters are every bit as well chosen as in The Sopranos. Magaro, McElligott, Huston, and Heathcote have faces built for billboards. When they get that faraway look in their eyes it can only mean one thing: California. Simplest chord changes in the world, the unstoppable D-hiccup-A-G-A-D, “Sweet Jane.” It means the parents get left behind watching South Pacific on the tube while life moves on, in this case to LA.

Fine, fine music is the glue that unifies the characters’ quicksilver dreams. Chase orchestrates the needle drops with emotional precision, like Michael Mann, Martin Scorsese, and Spike Lee before him. Special kudos to Sopranos and Springsteen alum Steven Van Zandt for the musical production. We’ve seen versions of Doug’s story arc in Alice Doesn’t Live Here Anymore, in the Adrien Brody scenes from Summer of Sam, and most recently in Matthew Lillard’s unfairly overlooked Fat Kid Rules the World (which somehow hasn’t yet made it to big screens in the East Bay). Remember Detroit Rock City? Same impulse, with added tears.

The brilliant coda, with little Evelyn — narrator of the movie — turning up the volume and dancing in the windy California street, crystallizes Chase’s redemptive, nostalgic vision, the epitome of a big-budget personal essay with killer oldies and a kaleidoscopic cast. The Lord Byrons? Why not? Boomers? Bigger than that. Not Fade Away is about the imperishable idea of youth and the promise of endless wide-open possibility. Time will always be on its side.