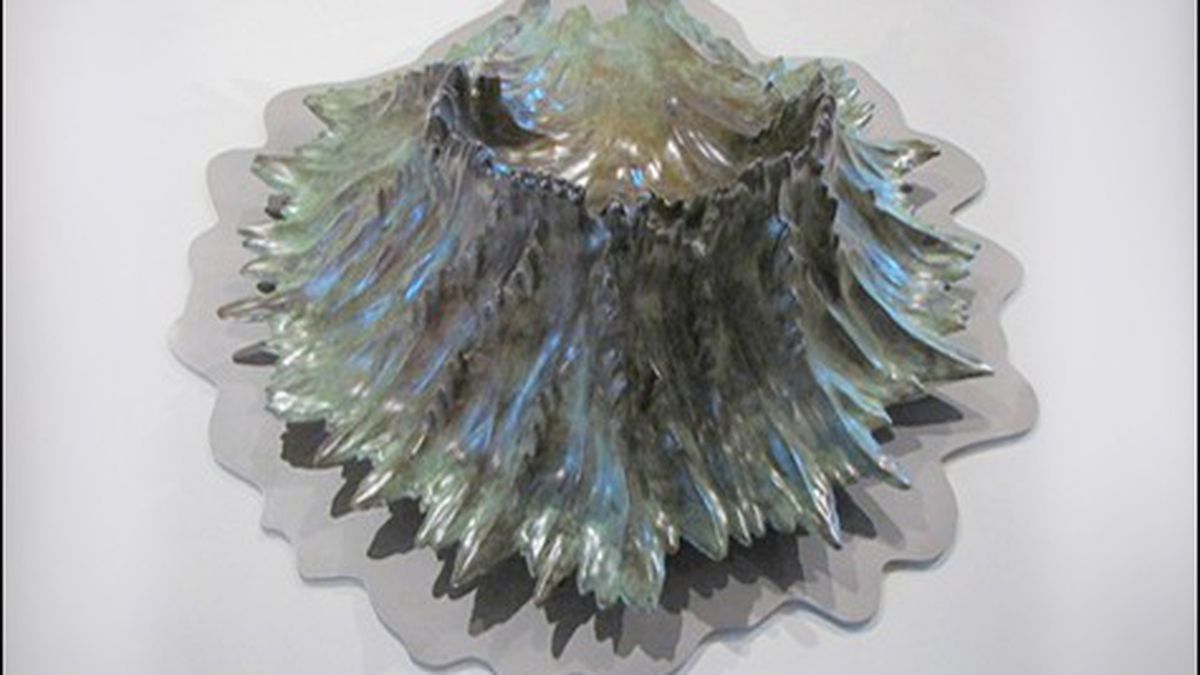 Marks, who began working with encaustic in 1992, is well known within “waxy buildup” artist circles. In the Sedimentary Series, begun in 2005, she explores the limits of the medium, flooding her paper substrates with beeswax which she then carves and scribes. After rubbing powdered pigment and graphite into the sgraffiti, she melts and fuses the layers with a heat lamp, creating densely patterned translucent surfaces — rock that we can look into. Marks: “The interaction of light and heat, sediment and surface, recreates processes seen in nature — fractal formation.”

Sumptuously colored monochrome early works are exhibited downstairs; the more recent diptychs shown upstairs exploit the effects of layering, while invoking mythology (e.g., Persephone, associated with the seasons) and the restless, immortal sea. Best of all are three panoramic paintings, richly detailed and spatially ambiguous, entitled “The Journey from Kamakura to Kyoto,” First, Second, and Third Days, perhaps referring to a Buddhist proverb exhorting persistence in spiritual as well as physical travel. Art historian Peter Selz wrote about the series: “They are open to free association by the viewer. They may suggest clouds, sand, rippling water, ploughed earth, heavy fog — everything from mountain ranges and deep canyons to beehives and fingerprints. They can also evoke a sense of turmoil as well as a feeling of peace.”

Heimbigner, who works at Berkeley’s Artworks Foundry, found that he missed the mountains of his hometown of Missoula, Montana, and decided to make his own, using the wooden handles of discarded foundry brushes as casting modules. His Range series bronze sculptures take two forms: long linear ridges that appear spinal, dental, or vegetal, as well as mineral or crystalline, and radial forms reminiscent of volcano craters smoothed by erosion (or Art-Nouveau-style vitrification). Set atop flat, irregularly shaped steel bases that resemble placid water lapping island archipelagos, and floating on concealed support rods or atop columnar table stands, they’re elegant and powerful. An impressive debut. Artist talk on Saturday, December 10, 2-4 p.m. Umi to Yama runs through December 31 at Vessel Gallery (471 25th St., Oakland). 510-893-8800 or Vessel-Gallery.com

When You Can’t Grow, Barter

Buy Curious: Oodles of Online Bargains, Prepping for the Playa, and...