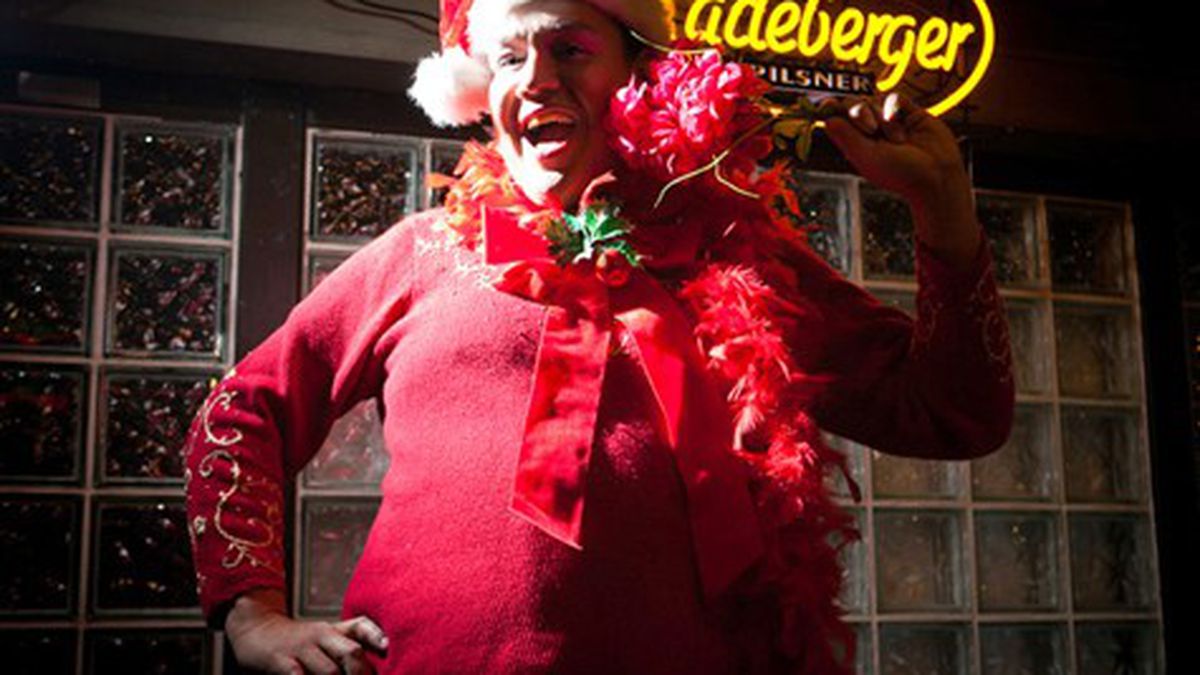 By some counts, Charlie Ballard has a borderline-Tourettes impulse to say whatever he’s thinking at the moment, so long as it hews to his theme of being a gay Native American comic. That often doesn’t go so well. Like, say, the time he auditioned for America’s Got Talent and regaled a straight-laced audience in Oregon with his best “gay Native American” stereotype: It required Ballard to whoop while patting his left butt cheek. He was promptly booed offstage.

“I don’t think anyone wanted to see a pouty gay Indian,” he said indignantly, recalling the incident a year later. “I mean, I’m notorious for my dick jokes. … When I went up there, I was like, all TV-ready, and they still cut me down. I was like, ‘You guys booed me down for that?’ I was like, ‘Gimme another minute. I’ll give you guys a reason to boo me down.'”

A recent performance at the now-defunct Occupy San Francisco encampment went somewhat better. Ballard started his set by asking if any occupiers needed a blow job to keep warm. They laughed. One woman took him seriously. “Hey, the gay tents are all in the back,” she told him.

Though Ballard is already eight years into his comedy career, he’s still trying to cultivate an audience. A part-time waiter at Chevy’s, he’s tall, bulky, and soft-featured, with an almost prickly sense of self-command. He’s the kind of person who knows what he wants without looking at a menu — as he demonstrated with an elaborate beverage order at Oakland’s Cafe Madrid: medium eggnog frappuccino, no coffee, just the nog, thank you. He signs all his emails “Xoxo, CB. Hi Hi Hi Bye Bye Bye!!”

Ballard thinks that having provocatively gay material could be one of his pitfalls, since it makes some people uncomfortable. Plus, his emphasis on raunch is compounded by his overall confrontational personality. Ballard certainly isn’t one to mince words. He said he really wished America’s Got Talent had aired his audition tape, “just to show what assholes those guys were.”

But he’s also willing to acknowledge that one person’s alienation is another person’s niche market. And ultimately, Ballard decided that “hella gay” was the way to go, from both a business and a pop-culture standpoint. In September he launched a monthly LGBT comedy showcase at La Estrellita Cafe in East Oakland. Performers don’t have to be gay, though it’s definitely an enforced theme. Thus, heterosexual alt-comic Andrew Holmgren appeared on the show in the guise of a gay Jesus, at Ballard’s behest. “Yeah,” Ballard said, grinning mischievously. “We went there.” He even upped the ante by convincing Holmgren to dress one of his friends up as a gimp (i.e., sex slave).

Admittedly, La Estrellita is a fairly interesting place to hold a gay comedy night. A small, family-owned Mexican restaurant on East 12th Street, it sits in an area that’s largely untapped for gay infrastructure. But owner Jose Macias seems to relish the newfound comedy clientele. “We’re gay-friendly here,” Macias said, acknowledging that Estrellita hosts a wide variety of events — including cumbia, salsa, and spoken-word nights — to honor the diversity of its surrounding neighborhood. He added that overall, The Hella Gay Comedy Show has been remarkably successful, despite lacking a big-name headliner to anchor it. The October show was standing-room only, and Ballard clocked 108 people at the door.

Moreover, Ballard said, the supply-and-demand laws are in Oakland’s favor, given that Berkeley has long been home to “Marga’s Funny Mondays” (which ended on Halloween) and San Francisco is a veritable hotbed for gay-themed comedy nights — most notably, “Funny Tuesdays” at Harvey’s Restaurant & Bar in the Castro. Oakland, in contrast, is surprisingly gay-comedy-bereft. That’s dispiriting, Ballard says, given that the East Bay has a high concentration of LGBT folks per capita. “When people think gay, they think San Francisco,” he scoffed. “But guess what bitches, we’re already in your community.”

Lest you doubt their numbers, Ballard is quick to point to the sizeable crowds that show up at Hella Gay. He tries to keep things interesting by turning the event into a variety show, of sorts. He has booked soprano opera singer Taylor Ott, improvisational comedian Kazumi Kusano (who does a fake geisha bit that, in Ballard’s estimation, is “quite fabulous”), and a transgendered storyteller named Morgan. His next showcase will feature a comic magician named Fred Anderson. He’s considered booking a trapeze act.

Ballard has also burned a few bridges along the way — a couple Hella Gay performers were resentful that Ballard paid them in tacos, even though he gets the venue for free and charges $10 at the door. When confronted, though, he remains indignant. “Well, you are getting a free drink and free nachos,” he reminded one grouchy comedian. “So there’s some sort of payment involved.” Ballard also points out that he has a symbiotic relationship with his performers — they get stage time and a little press; he handles all the promotion and pockets what he says is $30-$100 in paper returns. Macias said that by enforcing a two-drink minimum next year, they’ll hopefully make enough money to pay the comedians, too.

Ballard remains sanguine about it. Even if some artists don’t come back, he always has more lined up. That’s just the nature of the beast. “I know gay comedians up the ass,” he said. “No pun intended.” &#8;