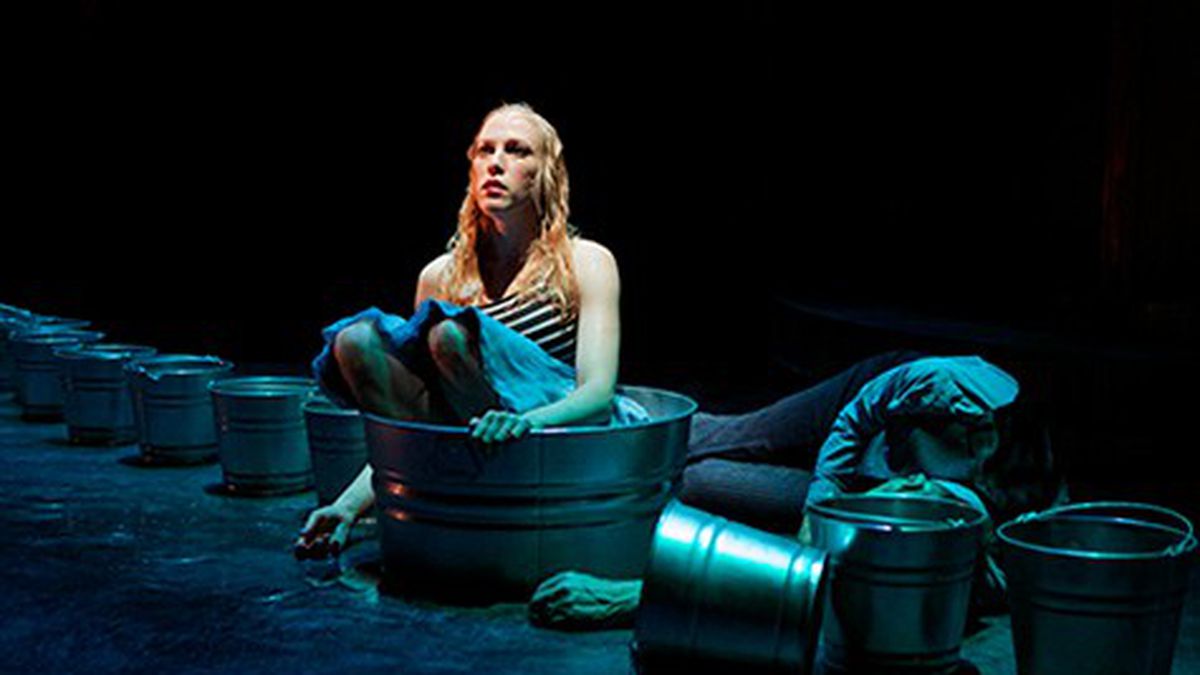 In the Greek tragedy Orpheus, the titular musician travels to the underworld to save his beloved bride, Eurydice, from the clutches of hell. If that journey doesn’t sound difficult enough, the Greek gods attach a tricky catch to his mission: If Orpheus turns and looks back at his wife for even a fleeting moment while rescuing her, she will die a second, permanent death.

That story has been told countless times over the course of centuries, often resurfacing in operas, high school English classes, limericks, paintings, and even a few movies. Perhaps the pervasive quality of the original is what makes playwright Sarah Ruhl’s Eurydice, currently being put on by Shotgun Players at Ashby Stage (1901 Ashby Ave., Berkeley), feel new. Rather than focusing on the distraught and heroic Orpheus, Ruhl’s version chronicles Eurydice’s domestic life in the underworld. The trade-off is far less exciting, but the fresh perspective adds nuance and depth to a familiar tale: While Orpheus is often seen as a parable about self-discipline, Ruhl’s version, though drained of suspense, works well as a metaphor for loss and yearning. The audience first meets Eurydice (played by the lithe Megan Trout) and Orpheus (the handsome Kenny Toll) on the day of their engagement. Their infatuation with each other is clear from the start, thanks to a well-choreographed dance number that should come as no surprise — after all, acclaimed choreographer Erika Chong Shuch is in the director’s chair — but is surprising nonetheless. In between passionate kisses, the couple proclaims their undying love for each other, despite their fundamental differences: Eurydice has a penchant for structured, intellectual discussion and Orpheus is a laid-back, wandering artist type. Even to someone unfamiliar with the tragic source material, it’s clear that the couple’s bliss won’t last for long — which is ultimately a good thing, considering Eurydice and Orpheus are cloyingly cute whenever they’re together. Though Trout and Toll have decent chemistry, watching them is akin to watching a lust-filled PDA session that goes on for too long.

One welcome reprieve comes in the form of a scene from the Underworld, where Eurydice’s dead father (the talented James Carpenter) watches her progress. Overcome with grief at the thought of missing her nuptials, he pens her a letter that, when read aloud, makes for a bittersweet moment that has more to say about loss than every other portion of the play combined. It’s clear that Ruhl, whose own father died when she was twenty, is best when writing about grief and sorrow rather than puppy-love, and Carpenter’s solemnness is far more believable than the sugary dialogue between Trout and Toll.

Predictably, however, that damned letter proves to be more trouble than it’s worth, as Eurydice suffers a tragic death while trying to retrieve it. From there, she is reunited with her father in the Underworld, though she remembers nothing of her life before. What follows is a long journey for not only Eurydice, who struggles to regain her memory and find her way, but also for audience members, who likely will find the sluggish middle portion of the play less thrilling than its beginning and end.

The most entertaining aspect of the production is the visual effects. In the liner notes of the play’s original script, Ruhl wrote that she wanted the Underworld to seem more like something out of Alice and Wonderland than hell, and Shotgun Players’ stage manager Nikita Kadam honors that. The stage is transformed into an intricate, two-story industrial warehouse complete with an elevator and running water.

Meanwhile, Ruhl’s colorful Three Stones — comparable to a Greek chorus — could easily be a product of the Mad Hatter’s invention. Dressed in a mismatch of neon colors and sporting some crazy contact lenses, each of the Three Stones imparts its deathly wisdom on Eurydice, hoping she will come to terms with her new life in the Underworld. Some of the Stones’ commentary is funny, but it’s mostly symbolic. According to the Stones (played by Peter Griggs, Beth Wilmurt, and Jeannine Anderson), death and grief becomes bearable only when you allow yourself to forget and move on — you must, in short, become like a stone. Of course, that’s a lesson the all-too-human Eurydice is hesitant to learn, though she spends a prolonged portion of the play wrestling with the notion anyway. And while it’s refreshing to see Eurydice’s fate in her own hands rather than her husband’s, it’s easy to leave the theater wishing she had done more with it.