The Uptown Oakland co-working site aims to give creative professionals a place to invent, perform, collaborate, and make a living. 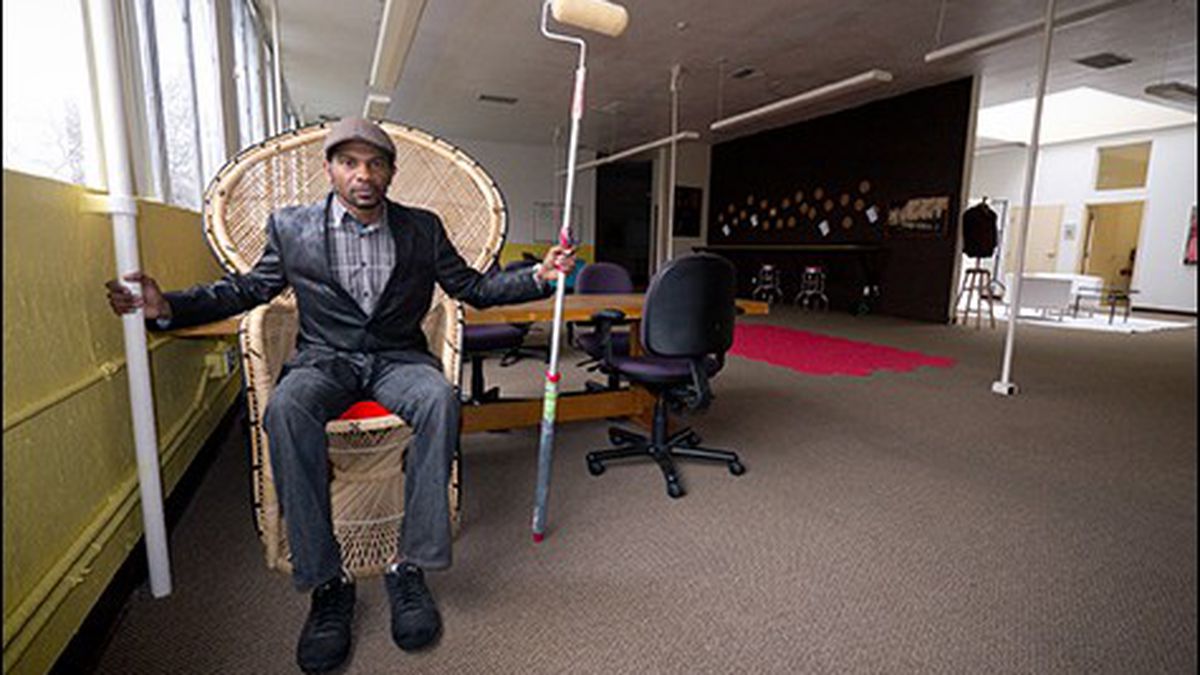 Jennifer Johns, an Oakland-based soul singer, wanted to release her second album last September. But as the date approached, the project wasn’t finished. One of the biggest obstacles, she said, was coordinating the efforts of so many people — those who were helping her with social media, videography, graphic design, and more.

“The amount of energy, time, and money it takes to find photographers, get the website up, link up with your publicist — there’s no physical space … to bring all the people together at one time,” she said.

That was, until last week, when Oakstop, the East Bay’s newest co-working space, officially opened its doors. Johns was one of Oakstop’s first members.

“It completely changes the game,” said Johns. At Oakstop she can hold strategy meetings, host listening parties, or just work at a comfortable desk. “I wish this had been here throughout my career,” she said. Now, she plans to release her Afrobeat-electronica fusion album, Chronicles of the Aquarian Mind, on April 30.

Co-working spaces have become increasingly popular in recent years. They allow members to pay fees to access shared office space and various amenities; they often attract a diverse mix of professionals, such as freelancers, independent contractors, small business owners, and startup entrepreneurs. In addition to providing a convenient place to work, co-working spaces aim to foster collaboration between members.

Oakstop, a 4,000-square-foot space located at 17th Street and Broadway in Oakland, is based on the same concept, except that it caters primarily to artists and creative entrepreneurs. For artists, “there’s always that stigma that ‘I don’t have a lot of resources’ or ‘I’m not very professional,'” said founder and director Trevor Parham, who also runs an art consulting business called Refined Arts. “Now, I can actually have that while also at the same time being surrounded by a community of my peers.”

Oakstop is not focused on providing studio space (although it does offer that), but rather aims to give artists a place to work on the business side of their craft. Parham said he plans to provide equipment, mentorship, and training resources designed to help members advance their careers. His working mission statement is to create “a shared working environment that fosters collaboration, professional development, and economic sustainability for creative entrepreneurs.”

“In some ways, creatives bring a lot of vibrance to spaces, but then the space also gives them a feeling of professionalism,” said Parham. “So they can step up their game.”

The space itself is gorgeous. The second-floor office, which was most recently occupied by an engineering firm, has multiple skylights, high ceilings, exposed brick, and large windows overlooking Broadway. Since he began renting out the space last month, Parham has undertaken a massive redesign of the office, bringing in chic furniture, creating a green carpeted section that resembles grass, and hanging art on the walls. Oakstop officially opened last week but already has about twenty members, most of who have previously worked with Parham. They include painters, musicians, photographers, installation artists, DJs, filmmakers, and a yoga instructor, among others. Parham said a record label and the organizers of First Fridays have also expressed interest in joining. Despite the fact that it’s branded toward creative entrepreneurs, Oakstop is open to anyone.

Parham came up with the idea for Oakstop more than a year ago. He had been working for NextSpace, a large co-working company that has eight locations in California, at its downtown Berkeley office as an art consultant, helping find art by local artists for the space and creating a fifty-foot-wide custom mural on one of its walls. Parham also did consulting for NextKids Potrero Hill in San Francisco, which offers an on-site daycare program and is geared toward families.

Erin Griffin, community curator at NextSpace Berkeley, suggested to Parham that he should consider running his own co-working site geared toward artists — a niche that they both agreed hadn’t been filled in the Bay Area. “There’s so much talent in Oakland,” said Griffin, noting that while there are multi-use art galleries, there aren’t spaces that focus on the business side of being creative. “Trevor brings it one step further — he’s going to have even more people in this space, different kinds of talents … [and] help you be better at promoting yourself and making yourself a better business owner.”

Other plans for Oakstop include hosting performances, art shows, and workshops, and creating a retail component, Parham said. He noted that the space is designed to complement, not compete with, existing co-working sites. He even suggested that Oakstop could share members with the nearby Impact Hub Oakland, a co-working space and entrepreneurial incubator that focuses on activism and social justice.

Like other co-working sites, Oakstop has different levels of membership. The lowest “community membership” level costs $50 a month for two day passes per week or $125 a month for five day passes per week and four hours’ worth of conference room access. The highest level, an “office membership,” offers private office space 24-7 for $500 to $1,000 a month, depending on size. Non-members can also purchase day passes and rent the conference room or event space.

Parham said that, given that the creative entrepreneurs he is targeting may have unpredictable schedules and unique needs, he will allow members to customize their memberships. The goal is that “people aren’t paying for value that they are not using,” he said.

His longer-term goal is to help members get paid through a “creative agency branch” of Oakstop. The idea is that the public will be able to turn to Oakstop for services such as graphic design, photography, interior design, or other skills. For artists, that means being a member of Oakstop could have the added benefit of getting connected to potential clients. Parham said the exact structure of this setup is still to be determined, and that it will depend in part on the kinds of members Oakstop draws.

But if it were to succeed, such a concept could have a meaningful impact on local artists — especially now that full-time work has become increasingly harder to come by, said Parham. “We believe we can start to be a bit of a creative services force here in Oakland … a powerhouse for creative output.”

Editor’s Note: A previous version of this story mischaracterized the nature of the company NextSpace. This version has been corrected.