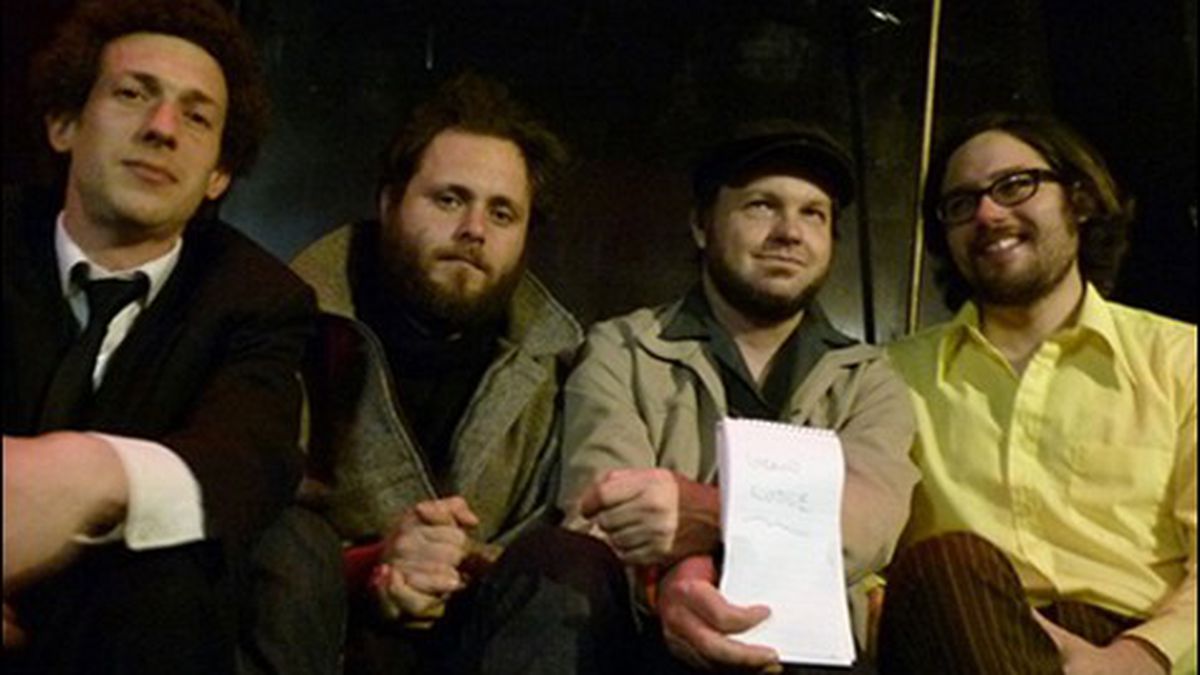 Moving to the Grand Lodge

How Smith Dobson reinvented himself in the rock world.

Smith Dobson‘s surname is a pretty loaded signifier in the jazz world. His father, also named Smith Dobson, was a locally renowned pianist who passed away in 2001. His mother, Gail Dobson, is a San Francisco-raised jazz singer. His grandmother is also a jazz singer, while his grandfather plays jazz accordion. His sister, Sasha Dobson, is a relatively famous vocalist in New York — she spent much of the past year touring with Norah Jones. The younger Smith — who is actually Smith Dobson V— grew up playing drums in Santa Cruz. He eventually took up vibraphone, piano, and saxophone. He currently ekes out a living as a session player. He calls jazz a “home.”

But now his heart lies somewhere else. Deciding that the jazz world has reached a “dire state,” Dobson recently crossed over to indie rock. His new band, Grand Lodge, is built entirely on three-minute pop songs with snappy hooks and terse, contemplative lyrics. And, ironically, he says, the circumscribed pop form is more enabling.

Why? Well, the short answer is that Smith Dobson has a lot of wanderlust. He’s slightly dissatisfied in his current genre, and prone to utter statements like, “Jazz in the Bay Area is on life support.” (Meaning it’s full of musicians who practice eight hours a day to play some under-attended nightclub and earn 10 percent at the bar, he said.) Plus, he’s newly enamored of indie rock, a genre he discovered via his father, and reencountered at the behest of an ex-girlfriend. He finds a level of freedom in rock ‘n’ roll that, for whatever reason, seems to be diminishing in jazz. Most importantly, he wants to be a star.

Dobson wouldn’t necessarily put it that way. “I’m more of a closet rock musician trying to come out of the closet,” he said, sitting with band mates “Misisipi” Mike Wolf (who plays guitar) and Tony Sales (who plays drums) at a cafe in the Mission District. “In the jazz world, nobody really knows that I’m doing this. And the few people who do look at me like, ‘Hmmmm … what’s wrong with this guy?”

Dobson said he’s spent a lot of time among people who disparage rock as a simpleton’s genre. But he always secretly liked it. He wrote synth-pop songs as a kid, dated chicks in rock bands, and ultimately gravitated to the sounds of Television and The Kinks. And now he’s fashioned himself — consciously or not — as kind of a young Bob Dylan. He arrived at the coffee shop wearing a sailor cap and round glasses. Like every member of his family, Dobson is lean and fine-featured, though he prefers to look scruffy and shaggy — possibly a function of being immersed in the Mission District performing arts scene. All three of the band members wore beards. The unbearded one, keyboardist Michael Parsons, was off teaching a piano lesson.

But this current iteration of Grand Lodge is only about four months old. The group’s new self-titled album actually features different personnel. With Mike Irwin Johnson on guitar, Parsons on keyboard, Patrick Korte on drums, and — in a surprise move — Dobson on bass, it was much more of a jazz musicians’ dalliance into rock. Irwin Johnson is the leader of swing band 8 Legged Monster, Korte is a member of various Jazz Mafia bands, and Parsons is a sideman who prides himself on knowing “a big chunk of the American Songbook.” Dobson’s last album as a leader, called Basement Bloodlines, came out on the avant-garde label Evander, and featured all original modern jazz tunes. He learned to play bass specifically to be in a rock band, because he thinks drummer-singer-led operations are weird. Also, he likes standing at a microphone, for better effect.

Which made Grand Lodge seem like a real departure for all of them. The group is very consciously pop, in a way that references Rubber Soul and other late-Sixties psychedelia. Even the rustic browns and Old English fonts on the album jacket lend to the band’s aesthetic. The songs are short and jaunty, with chunky piano lines and ear-wormy hooks. Parson alternates between grand piano, Hammond B3 organ, and Casio keyboard, which gives the illusion that Grand Lodge is straddling three different eras. Dobson’s voice — a suave, but infinitely yielding tenor — is the glue that holds everything together.

There are, indeed, at least two viable pop songs on this debut. “You Didn’t Say It” is a sad love ballad with a disarmingly playful melody. And I told you she meant nothing/But you didn’t say I love you, Dobson croons, as though apologizing to a lover for his adulterous behavior. It’s true enough to real-world relationships to make listeners identify, or at least sympathize. (Dobson says he wrote the lyrics while trying to iron out differences with an ex-girlfriend, which means the song pretty much wrote itself.) Yet it’s also snappy enough to please anyone who consumes music for purely escapist reasons.

Same goes for “Panorama,” the track that may be Dobson’s break-out hit. Featuring a plunked piano line over a shuffle drumbeat, it’s easily the most accessible song, even if it’s not clear what Dobson is singing about. He refers to Fritz Lang‘s Metropolis, pinstripe jail suits, and “the paranoia of young minds,” among other miscellany. Perhaps it’s a send-up to old silent films. He says it’s free association.

The new Grand Lodge is more firmly planted in rock, Dobson says, given that Mississippi Mike (whose stage handle derives from his home state) is actually more of a country musician, and Sales is the son of bassist Tony Fox Sales, who backed David Bowie and Iggy Pop. Dobson says the personnel shift was mostly logistical — Korte and Irwin Johnson were both tied up with their own gigs — but it also changes the band’s identity in a profound way. The division of labor is more equal in that everyone is writing songs. (Parsons said that collaborative mindset transferred over from the jazz world.) Pedigree-wise, it’s now two steps farther away from Dobson’s home genre.

And he feels no compunction about leaving. “Am I more at home in the rock world? That’s a loaded question,” Dobson confessed. He admits there’s a certain romance to being in a rock band that isn’t necessarily achievable with “The So-and-So Quartet.” But more importantly, indie rock seems open to innovation in a way that jazz isn’t, Dobson argues. Maybe it’s the newness or constant evolution of the genre, or the fact that the audience skews younger, or the general lack of scholarship involved. Maybe it’s a function of rock being made in a garage.

Whatever the case, Dobson said he feels a level of freedom in rock that wasn’t possible in an older, more entrenched tradition. And he’s willing to approach indie rock on its own merits. “It’s not easy for a jazz musician to step into another genre and be a purist about it — meaning not turn it into fusion or prog rock,” Dobson said. Yet he managed to reign himself in for Grand Lodge. The band is entirely denuded of long-winded improvisations or the proclivities of fusion. Parsons says he, too, is ready to emerge from the be-bop cave, and that he finds Dobson’s material profoundly satisfying, albeit uncomplicated.

Update: In the original version of this story we misspelled the name of Misisipi Mike.

“Yeah, it’s limiting in the same way that speaking English is limiting,” Parsons said. “But some limitations are good.”

Shrooms Make You a Good Person … Up to a Year...