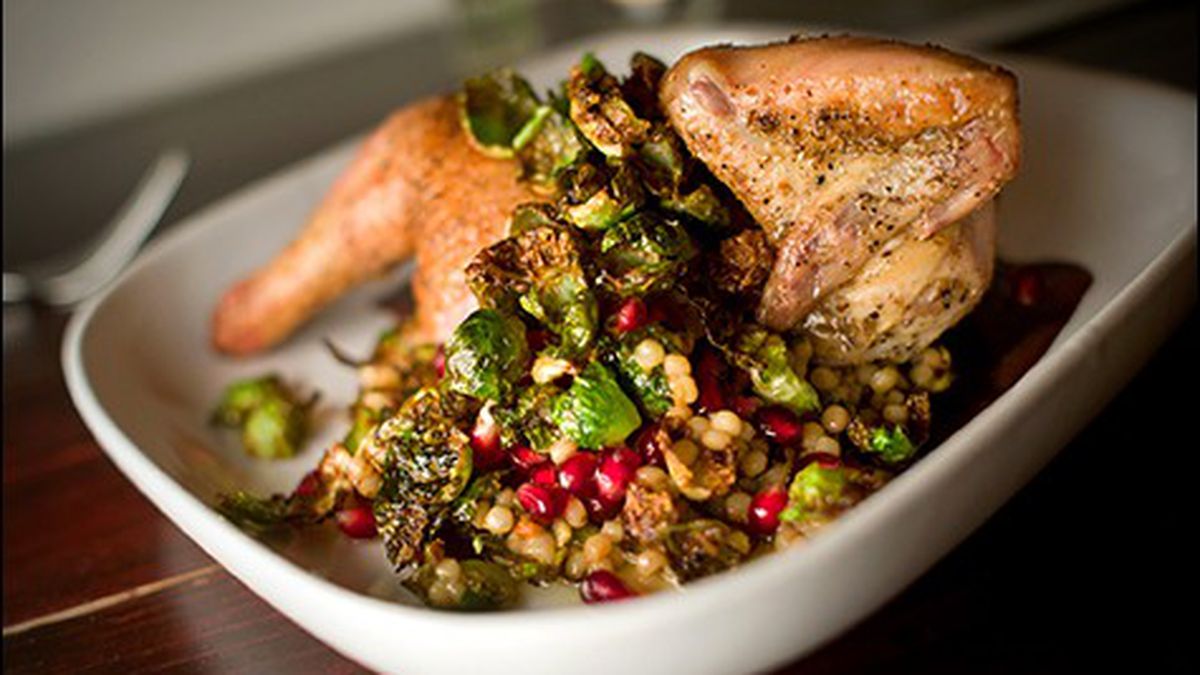 One of the most striking things about Mockingbird, the new California-style bistro in Uptown Oakland, is how grown-up the place feels: smooth jazz on the speakers, tied curtains in the window, and fresh flowers on every table. When, as dusk settled, our server lit up candles to illuminate the dining room, it sealed the deal: If ever a restaurant was tailor-made for “date night,” this was it.

Chef-co-owners Melissa Axelrod (who’d cooked at Delfina and other San Francisco restaurants before starting her own catering company) and William Johnson (Zuni Café, Alembic) quietly opened Mockingbird in the former Hibiscus space in September. The food is straight-up Northern California cuisine in the Chez Panisse/Zuni Café tradition, which is to say that, as at countless other Bay Area restaurants, most of the ingredients are local/seasonal/farmers’ market-driven and prepared with a minimum of fuss. But the menu, which changes frequently, is notable for its international touches — with detours to Asia and the Middle East in addition to the usual vaguely European fare — and its exceedingly reasonable prices.

Perhaps this is the real wonder of Mockingbird: As Uptown Oakland’s food scene becomes increasingly upscale, this is a restaurant that looks upscale, but where you can get cheery service, candle-lit ambience, and a complete meal — a big hunk of meat and generous sides — for less than $20.

My first bite of a crispy pork torchon appetizer gave me a good idea of the restaurant’s globally accented Northern California sensibility. Loosely inspired by a recipe in the Momofuku cookbook, these were panko-crusted, deep-fried things, roughly the size and shape of a crab cake, and as rich and unctuous as you’d expect from something made from all the meat and fat picked off of a boiled pig head. What was striking was the dish’s Asian flavor profile: a salty-sweet umami punch that tasted a bit like hoisin sauce, but turned out to be house-made Vietnamese-style fish sauce caramel (made, basically, by cooking fish sauce and palm sugar until the mixture gets dark and sticky). A fairly spicy kimchi salad and gingery pickled carrots completed the plate — a memorable start to a meal.

Just as enjoyable was an appetizer of perfectly cooked head-on shrimp and squid. Between the sucking out of the shrimp brains; the streak of bright red, earthy, harissa-based sauce on the plate; and the little cubes of fried polenta (for pure texture and richness), this made for one sexy plate of food.

Steak and fries is about as classic as it gets when it comes to French brasserie or bistro dishes. At Mockingbird they serve a “bistro” steak (aka the teres major muscle — from the “back armpit area of the cow,” Axelrod explained), a lean cut that’s prized for its extreme tenderness. The kitchen’s execution was on point: a well-seasoned, juicy steak cooked to a perfect medium-rare and paired with excellent French fries. The only flourish was a drizzle of bone marrow vinaigrette, which I loved more in theory than in practice — delicious, in those one or two bites when I could taste it, but mostly lost on the plate.

My favorite entrée was the Moroccan-style roasted half-chicken ($17), a bargain-priced dish that points to the restaurant’s Zuni Café lineage. The key, as it is with Zuni’s legendary birds (whose virtues have been enumerated by hundreds of home cooking bloggers), is that each Mockingbird chicken gets pre-salted one to two days before cooking — a crucial step that has a tenderizing effect and allows the seasoning to penetrate all the way into the meat. Slathered with a bold spice rub (coriander, cumin, fennel, and such), the skin crisps up beautifully in the oven while the flesh stays moist and well seasoned. What I was really into, though, were the sides: toothsome, pomegranate seed-studded Israeli couscous, which had soaked up all of the bird’s lovely juices, and crispy fried Brussels sprouts that were scattered on top like autumn leaves.

Though I never had a bad meal at Mockingbird, there were several dishes that would have benefited from a little editing. For instance, the restaurant’s version of a fisherman’s stew, made with mussels, clams, and house-made tesa (a kind of Italian-style bacon), had great elements: an intoxicating broth infused with the intense ocean flavor of the shellfish juices, plus a slice of grilled bread (topped with a garlicky slow-roasted tomato) that was perfect for soaking up the broth. But the stew was served in a shallow, wide-rimmed bowl crammed so full of shellfish and unwieldy vegetables — leeks cut too large and cooked not soft enough, and a giant braised endive — that the dish was difficult to eat.

A thick, boneless grilled pork chop was so juicy and flavorful that I swore it had been brined (Axelrod told me they just apply a simple herb marinade), but the meat needed a harder sear on top to caramelize and render more of the fat cap. And while this was a dish designed to please the meat-and-potatoes crowd, the sides — grilled chicories, Tokyo turnips, and basic mashed potatoes — felt a bit perfunctory.

Minor flaws aside, I came away from Mockingbird with an admiration for the restaurant’s homegrown, scratch-made ethos. Axelrod told me they’ve set up a kind of collaborative “chef-by-committee” approach, with Axelrod, Johnson, and sous chef Casey Mondry (another Zuni alum) all offering equal creative input. Two months in, there are still a few kinks to work out. And while Mockingbird may never be a destination restaurant — a place where you’d go expecting cutting-edge technique or artful plating — as a neighborhood bistro it’s one of the better options in the area.

Oh, for all you chocolate lovers, don’t miss Mockingbird’s house-made, hand-shaped chocolate truffles, priced at a dollar apiece and available in a variety of flavors. One was coated in crinkly ginger sugar; another had a nutty hazelnut crunch. Like most everything else at Mockingbird, the truffles were rustic-looking and a bit rough around the edges — but also thoroughly enjoyable and surprisingly inexpensive.