Plenty of savvy diners are familiar with ceviche, a raw fish preparation characteristic of the Mexican and Peruvian coastal cuisines. But have you tried kinilaw, a Filipino version of the dish that’s seasoned with calamansi juice, ginger, and Filipino vinegars?

You’ll have the opportunity to do so at Mixto, a new ceviche-themed pop-up dinner series, hosted by the farm-to-table Mexican restaurant Nido (444 Oak St., Oakland), that promises to explore the breadth and depth of this one dish — stretching across multiple cultures and culinary traditions.

The series will kick off at 7 p.m. on Sunday, November 10, with a four-course Filipino dinner cooked by Tim Luym, who was the chef at Poleng Lounge (San Francisco’s long-lamented upscale Filipino fusion spot) and now consults at The Attic in San Mateo. Tickets cost $85, purchasable online, and cover the cost the meal itself, beverage pairings, tax, and gratuities.

Mixto is the brainchild of Carlos Nieto, an Oakland-based party and event organizer. Nieto, who is half Peruvian, had been toying with the idea of opening a Peruvian cevichería, but then decided that organizing a series of one-offs would be a good way to test the waters.

From the beginning, he thought it would be cool to structure the pop-up series around the diversity of ceviche — the way the dish transcends boundaries and crosses over into seemingly unrelated cuisines. Having grown up in the Bay Area, Nieto said he always felt like he’s an “honorary 25 percent Mexican and 25 percent Filipino” because those were the cuisines he grew up eating at friends’ houses and grew to love. 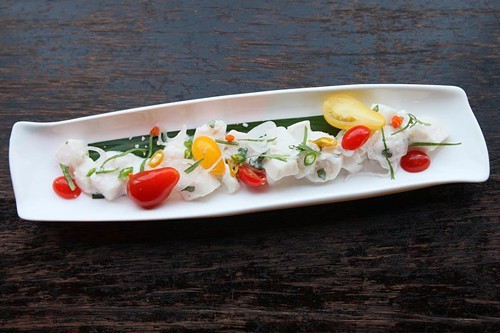 Nieto remembered eating a sashimi-like dish during a trip to the Philippines, so he asked Luym, a longtime friend, whether there was such a thing as Filipino-style ceviche. As it turns out, many of the small fishing communities in the Philippines — particularly in the province of Cebu, where Luym’s extended family lives — have a long history of taking freshly caught fish, cleaning it, and then “cooking” it with calamansi juice, shallots, and chili peppers. It’s the same concept that Mexicans and Peruvians employ with ceviche.

“A lot of islands that have great seafood — not just the Philippines — they find a way to sterilize that seafood with some kind of acid,” Luym explained.

For Sunday’s dinner, Luym’s first course will be a sinigang-style shrimp ceviche — raw shrimp that will be lightly “cooked” by the acidity from the sinigang, a sour Filipino soup. Then Luym will serve two kinilaws: The first, a traditional preparation characteristic of the southern Philippines, will feature mackerel, calamansi juice, and palm vinegar. For the second, a California-fied version of a Cebuano-style kinilaw, Luym will use walu, coconut milk, and coconut vinegar.

The third course will be a duo of silog (garlic fried rice) tacos — one with milkfish belly and the other with pig’s head sisig, which Luym described as “Filipino carnitas.” The fourth course will be a twist on halo halo, the Filipino shaved ice dessert, served with avocado frozen custard.

Nieto said he might still like to open a restaurant someday, but those plans are on the back burner while he launches a new project — a Bay Area-based lifestyle website, TheFreshist.com. In any case, for now Nieto is focused on Mixto.

The second pop-up dinner, on December 8, will focus on Peruvian ceviche and will be prepared by chef Jose Sarmiento, the proprietor of a Peruvian-Mexican restaurant in Pacifica called El Toro Loco. Nido’s chef-owner Silvia McCollow will close out the series on January 12 with a dinner highlighting Mexican ceviche.