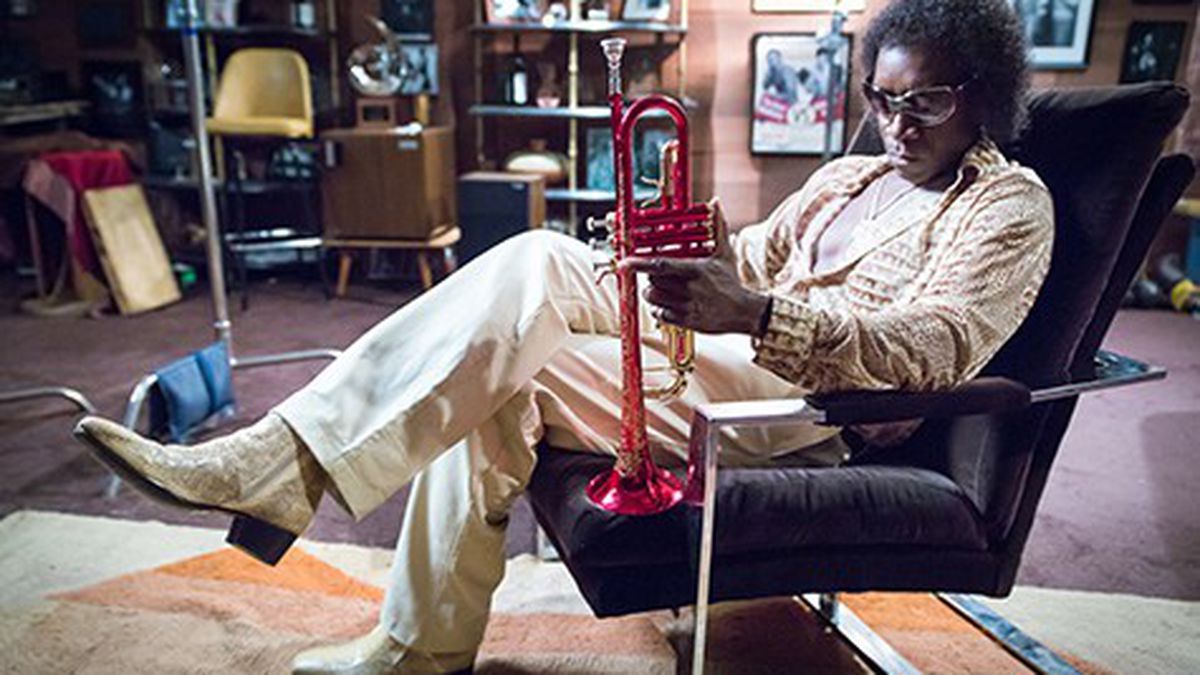 Miles Ahead Captures Miles Davis’ Lightning in a Bottle

In the new biopic, Don Cheadle deconstructs the jazz legend.

Artist biopics are always tricky to get exactly right, particularly the ones about musical superstars. And when we narrow that proposition down to Miles Davis, the tempestuous jazz trumpeter whose career and life story burned across 20th-century America like a comet, the ante goes even higher. That’s why it’s so gratifying that actor-turned-filmmaker Don Cheadle, who cowrote, directed, and acted as Davis in Miles Ahead, captures Miles’ lightning in a bottle, in one of the best musical dramas you’ll ever see.

Miles meant many things to many kinds of people, but his most important audience was always himself. If we close our eyes and let our thoughts drift back to 1979 — the days of his “exile from the world,” a six-year period of writer’s block, physical ailments, and soul-searching, when he was trying to work on his comeback album The Man with the Horn — it’s not hard to imagine Davis dropping by a Times Square movie theater and catching one of that era’s Black-themed urban actioners. It would be about a burned-out musician with a drug problem, haunted by ghosts of his past and impatient with lesser mortals, getting into lurid demimondaine situations as he forges ahead with his own personal musical vision. That make-believe grind-house thriller turns out to be Cheadle’s portrait of the artist.

They won’t leave him alone. Rolling Stone reporter Dave Braden (Ewan McGregor) crashes Miles’ life to wrangle a profile and gets put through the wringer. A thuggish producer named Harper (Michael Stuhlbarg) steals Miles’ latest rehearsal tape and holds it for ransom — Harper is promoting Junior (Lakeith Lee Stanfield), a young trumpet phenom who closely resembles a young Miles. The schnooks at Columbia Records pussyfoot around their cash cow, who insists they dump the term “jazz” for his coinage “social music” — but no one is listening. Miles falls for a party girl named Janice (Christina Kharis). A racist New York cop busts Miles for the crime of touching a white woman on the street in front of the Village Vanguard. Miles and Dave’s coke chase drops them into the crib of a pair of white hipsters, where Miles has to hear, for the umpteenth time, how much everyone adores Kind of Blue. And all the while, the composer of the gorgeous “Fran Dance” mentally vamps on a dream girl, dancer Frances Taylor (played by Emayatzy Corinealdi), his ex-wife. Her made-up face has a soft, buttery glow to it. Miles cannot let her go. Fistfights, gunshots, and other negative juju punctuate the tale.

All the while, director Cheadle — who wrote the screenplay with Steven Baigelman, adapted from a story they wrote with Stephen J. Rivele and Christopher Wilkinson — directs himself and his cast as if they were tripping along in a hallucinogenic fog. Miles Ahead dispenses with the corny mechanics of the traditional biopic but does not ignore motivation. Miles charges into the future in an effort to recapture his bygone restless energy; “It takes a long time to learn to play like yourself,” rasps the actor. Cheadle’s performance encapsulates everything we thought we knew about the artist plus many things that seem to have floated down from the rooftops. It’s the best acting job of the year so far, in an indispensable meditation on the pain of pure creativity.