.Mid-Week Menu: The Half Orange Launches, LIBA Falafel Gears Up to Open, and Caffe Mediterraneum Is for Sale

1) The Half Orange (3340 E. 12th St., #11), the new sausage-and-beer joint from restaurateur and San Diego transplant Jay Porter, is now open for lunch, Inside Scoop reports. The opening menu features a grass-fed burger, a sausage-and-kimchi sandwich, and a street-food dish called salchipapas that combines French fries, sausage, chorizo, and kimchi. The beer component, on the other hand, is on hold until the restaurant’s beer and wine license comes through. Hours are weekdays from 11:30 a.m. to 2 p.m.

The Half Orange took over the location in Fruitvale Public Market formerly occupied Taco Grill, which moved across the street (and changed its name to <a href="http://eastbayexpress.com/WhatTheFork/archives/2014/05/12/fruitvales-taco-grill-is-reborn-as-obelisco
“>Obelisco). 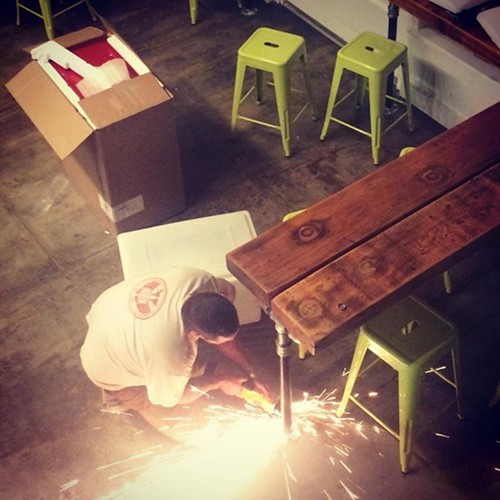 2) Good news for fans of the LIBA Falafel food truck: It looks like LIBA’s forthcoming brick-and-mortar restaurant in Uptown Oakland, at 380 17th Street, should open soon. Owner Gail Lillian said she doesn’t plan on releasing an official opening date in advance, but she did tell What the Fork that the shop is “getting close.” Construction has been finished for a couple of weeks now, and Lillian is already using the kitchen to prep all of the food for her trucks. Falafel lovers, keep your eyes peeled.

3) The lease on Berkeley’s historic Caffe Mediterraneum (2475 Telegraph Ave., which dates back to the Fifties and claims to have been the first cafe to serve a latte, is for sale. Berkeleyside Nosh reports that longtime owner Craig Becker will maintain ownership of the building, but wants to pursue other interests instead of continuing to run the iconic coffee shop. Meanwhile, Berkeley Reporter half-jokingly insinuated that — horror of horrors — Starbucks might buy up the spot.

4) Inside Scoop has details about the reasons for the Temescal tapas joint Barlata’s upcoming closure. It turns out owner Daniel Olivella was just tired of traveling back and forth from Austin, Texas, where he moved and opened another branch of Barlata last year. Grange Hall, the new comfort-food restaurant and cocktail bar that’s replacing Barlata, should open sometime in the next month or so.

6) This summer, Boot and Shoe Service (3308 Grand Ave., Oakland) has been doing special “Regions of Italy” dinners the second Wednesday of every month. On the docket tonight, from 5:30-10 p.m.: Little Italy! The Italian-American a la carte dinner menu will feature dishes like a hand-stretched mozzarella caprese salad ($10), sausage and peppers ($12), eggplant parmesan ($10), spaghetti and meatballs ($15), linguine and clams ($16), and veal marsala ($24). 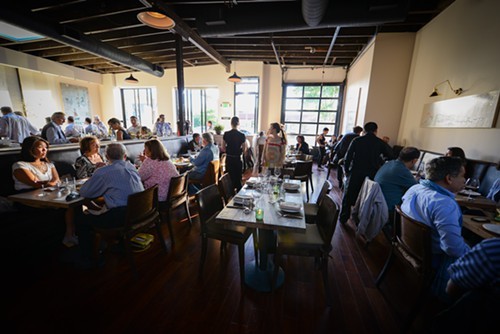 8) Courtesy of The Bold Italic, check out some sweet illustrations of Oakland’s historic bars — including one, The Kingfish, that’s moving soon.

9) Bay Area Bites has the scoop on the UC system’s ambitious new food initiative, which will include demonstration gardens, a focus on stocking dining halls with sustainably-sourced ingredients, and an influx of food-related curricula.

10) Last week, the Internet blew up when it caught wind of Reservation Hop, an awful new San Francisco-based tech startup that many likened to ticket scalping for restaurant reservations. In short, the website’s creator has been hoarding hard-to-snag dinner reservations (booking the tables under false names), then selling them to desperate (or lazy/rich) diners for $5-$12 a pop. Needless to say, San Francisco’s restaurateurs were not pleased.

No word yet on whether this “service” will spread to the East Bay — please, no — but all the negative attention has at least prompted the site’s founder to tweak his angle: Now, Reservation Hop is offering restaurants who cooperate a cut of the profits from reservation sales, and claims that the approach will help reduce no-shows.

11) Finally, ICYMI, Off the Grid will kick off its new Uptown Oakland food truck event on Monday, Standard Fare has started lunch service, and Oralia’s Kitchen has moved to Richmond.

Next ArticleMarrow Closes While Chef Searches for New Location