1) Inside Scoop reports that Penrose (3311 Grand Ave., Oakland), the new bar and grill from chef-restaurateur Charlie Hallowell (Pizzaiolo/Boot and Shoe Service) is slated to open this week — on Friday, November 22, according to the most recent update. As previously reported, the focus of Hallowell’s third restaurant (whose name has been condensed from the much longer Penrose & Sons Fine Meats and Spirits) will be on an extensive bar program and, as the Chronicle reports, food that will mostly either be served raw (assorted tartares, crudos, etc.) or cooked on the wood-fired grill. SFist notes that the reason the highly anticipated project took so long to complete is because Hallowell decide to expand the restaurant — now a sixty-seat dining room with a twenty-seat bar — to include to two adjacent spaces, a cafe and a nail salon.

2) Berkeleyside reports that the popular food truck KoJa Kitchen will be opening a brick-and-mortar restaurant at 2395 Telegraph Ave. in Berkeley (the former Maoz/Turkish Kitchen Express space), just south of campus. Like the truck, the restaurant will specialize in Korean-Japanese fusion cuisine, with a particular emphasis on burgers and sandwiches served on toasted-rice “buns” — a popular Japanese fast food item. 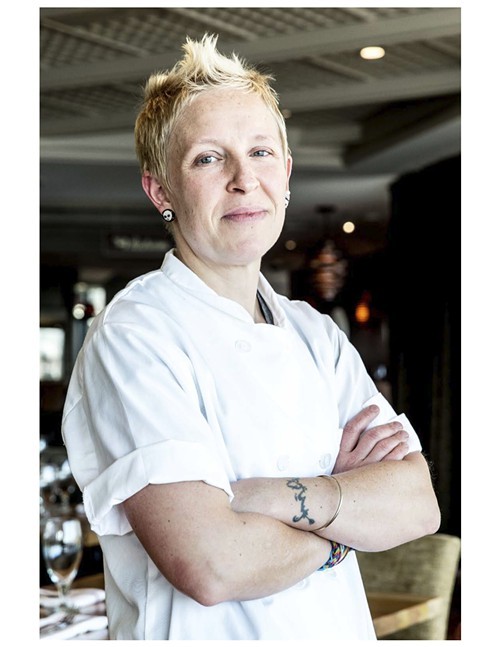 3) There’s a new chef at downtown Oakland’s Tribune Tavern (401 13th St.). According to Inside Scoop, Tracey Belock, who was most recently the chef at the dearly departed Disco Volante, has replaced opening chef Huw Thornton. A press release sent out this week stated that the restaurant’s basic concept — classed-up pub food — won’t change, but Belock will be adding versions of dishes like Oysters Rockefeller and Chicken à la King to the menu in the coming weeks. So, more old-timey American and slightly less old-timey British? Meanwhile, Thornton, the outgoing chef, told What the Fork that the split with his former employers was simply a case of “not a good fit.” He said he hopes start a new project in Oakland sometime soon.

4) Tablehopper notes the opening of Trabocco Kitchen and Cocktails (2213 South Shore Center), a new Italian restaurant in Alameda. The menu includes wood-fired thin-crust pizzas, some interesting-sounding house-made pastas (chitarrine with cocoa powder and rabbit ragu?), and an assortment of small plates such as Baccale e Peperoni (roasted salt cod marinated with roasted bell peppers). The restaurant is currently open for dinner only, from 5-10 p.m. Sunday through Thursday and 5-11 p.m. on Friday and Saturday.

5) As reported last week, Jodie’s Restaurant (902 Masonic Ave., Albany) — my favorite greasy-spoon breakfast joint in the East Bay — is currently in danger of being shut down due to an assortment of building code issues. A few additional details have emerged, most notably that owner Jodie Royston has a January 2014 deadline to raise the $15,000 needed to complete the required renovations and repairs or. Or, if Royston is able to find a suitable new location, he’d need about $50,000 to be able to move outright. Make a (non-tax-deductable, FYI) donation if you care to; it’s a place worth saving for its quaint small-town charm as much as its killer hash browns. In the meantime, check out the short video below, put together by food writer James Boo. (A word of caution: The video might make you damn hungry.)

6) SFoodie reports some fascinating new details about Artis Coffee (1717B 4th St.), the new cafe opening in Berkeley on December 7. Apparently, the owners plan to institute something called “live roasting,” wherein customers will be able to choose raw, green coffee and watch as the beans get roasted — in super-small (one-pound) batches — right before their eyes. Aside from the performative value of this style of roasting, in a practical sense what it means is that customers will be able to have extraordinarily fresh beans roasted to their preferred level of darkness.

7) A couple of beer-related items in Uptown Oakland: Inside Scoop reports that the San Francisco brewpub Cervecería de Mateveza is opening a new brewery and restaurant at 1701 Telegraph Ave. Highlights will include a variety of house-brewed beers (many of them caffeinated, since they incorporate yerba mate) and an empanada-focused food menu. Meanwhile, Diablo Dish has the scoop on the imminent launch of Lost & Found (2040 Telegraph Ave.), a new beer garden and “gourmet fast food” restaurant from the folks behind The Layover.

9) Finally, ICYMI, Santipapas, a gourmet salsa maker, has launched a new taco-centric menu at Olde Depot Public House, and I recommend five East Bay restaurants where you can dig into some early-season Dungeness crab.